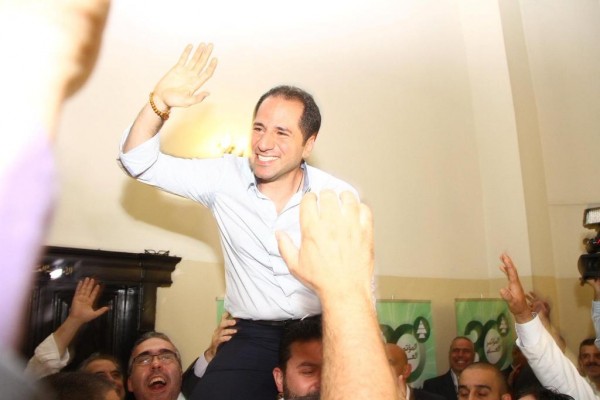 As was widely expected MP Sami Gemayel won the  elections  as the new  leader of  the Phalange Party  on Sunday succeeding his father, former Lebanese president Amin Gemayel.

“At this moment, my thoughts go to all the martyrs and all those who fell in order for us to be here today,” the MP said at the party’s headquarters in Saifi after his win was officially announce

Two deputy chiefs and a new political bureau were also elected on Sunday.

“I feel a very heavy burden and I will shoulder a huge responsibility. My daily work will be alongside all Phalange Party members, all Lebanese and all decent people,” Gemayel pledged.

“I salute Pierre Atallah and the members of Phalange Party and I thank them for the confidence that they placed in me,” he added.

The lawmaker also thanked his father, the party’s outgoing chief  for “giving the chance to all the members of Phalange Party  to run in this democratic battle.”

The Phalange Party has an economic and social plan for Lebanon that would once again give the people hope, Gemayel had declared after announcing his candidacy on Wednesday.

“The Phalange Party  is open to all Lebanese from all over Lebanon, regardless of their sect. It is open to all youths who seek Lebanon’s interests,” he stated.

His older brother, Pierre, was a member of parliament and the minister of industry until his assassination on November 21, 2006.

His grandfather, Pierre Gemayel, founded the  Phalange Party  in 1936. Sami is also the nephew of slain president-elect Bashir Gemayel, who was assassinated in 1982.

After the 2006 assassination of his brother Pierre, Sami rejoined  Phalange Party to head the Youth and Student Council and he later became the coordinator of the Central Committee.

In 2006  he   left the party to form the Loubnanouna Movement.