Fitch affirms Lebanon at ‘B’ rating with negative outlook 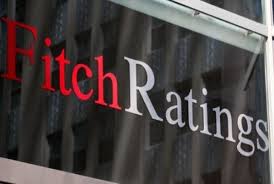 The following statement was released by the rating agency
LONDON, June 12 (Fitch) Fitch Ratings has affirmed Lebanon’s Long-term foreign and local currency Issuer Default Ratings (IDR) at ‘B’ with a Negative Outlook. The issue ratings on Lebanon’s senior unsecured foreign and local currency bonds have also been affirmed at ‘B’. The Country Ceiling has been affirmed at ‘B’ and the Short-term foreign currency IDR at ‘B’.

KEY RATING DRIVERS
The affirmation of Lebanon’s IDRs and Negative Outlook continue to capture political risks exacerbated by the Syrian conflict, as well as very weak public finances, an increasingly costly funding structure, and weak economic performance relative to peers.
These weaknesses are counterbalanced by Lebanon’s strong external liquidity, continued non-resident deposit inflows, and other structural strengths.
Political risks remain. A consensual government was formed in early 2014, but the country has been operating without a president since May 2014 as a result of multiple failed attempts to reach a necessary quorum in parliament. Strong political allegiances on opposing sides of the Syrian conflict suggest that the deadlock is likely to persist until the conflict has abated.

Nevertheless, Lebanon has managed to avoid major security incidents or sectarian tensions despite the arrival of approximately 1.2 million refugees from Syria since the start of the conflict compared with an official resident population of 4.5 million.

Public finances are very weak. General government debt is the third highest among Fitch-rated sovereigns at an estimated 134% of GDP in 2014. High debt levels have also contributed to an exceptionally high interest bill, at nearly 40% of government revenues. Persistent budget deficits will contribute to a further increase in the public debt stock through the forecast period. The funding structure has become increasingly costly. The financing of Lebanon’s sizable budget deficits appears to have become reliant on a funding structure that results in the Banque du Liban running annual losses in order to attract US dollar deposits from the banking sector. A growing unclassified asset account on the central bank balance sheet suggests that seignorage expenses could be 5%-6% of GDP per annum, but insufficient disclosure complicates more precise analysis.

Lebanon’s economic performance has been weaker and more volatile than peers since the onset of the Syrian conflict in 2011. Real GDP growth declined to a five-year average of 3.2% versus the ‘B’ category median of 4.4%, despite favourable revisions to the historical GDP growth series in late 2014. Lebanon has strong external liquidity. Its stock of foreign reserves was estimated at USD43bn as at end-2014, supported by deposit flows from the Lebanese diaspora. Reserve coverage is higher than peers, at 12.8x current external payments versus the ‘B’ median of 3.2x. GDP per capita and broader human development indicators are well above ‘B’ category peers, and more in line with the ‘BBB’ median, although governance indicators are slightly weaker than peers. The government also has an unblemished track record of public debt repayment.

RATING SENSITIVITIES
The Negative Outlook reflects the following risk factors that may, individually or collectively, result in a downgrade:
– A major destabilization induced by rising sectarian tensions, security risks, or spill-overs from the Syrian conflict.
– A reversal of the domestic banking sector’s willingness and/or ability to continue funding the government.
– Continued deterioration in public debt dynamics beyond our base case assumptions.

Given the Negative Outlook, Fitch’s analysis does not currently anticipate developments with a material likelihood of leading to an upgrade. However, future developments that may, individually or collectively, result in a revision of the Outlook to Stable include:
– Evidence of continuing resilience in Lebanon’s financing model notwithstanding ongoing domestic and regional political risks.
– Growing confidence in the sustainability of the domestic political situation.
– A reduction in public debt levels, whether through fiscal tightening or improved economic performance.

KEY ASSUMPTIONS
– Sporadic security incidents will prevail as long as the Syrian conflict continues.
– Domestic banks continue to be willing to finance government needs.
– The global economy performs broadly in line with Fitch’s Global Economic Outlook, including average Brent price assumptions of USD65 in 2015 and USD75 in 2016.
– Normalization of monetary policy rates in the U.S. begins toward end-2015 and proceeds in an orderly manner