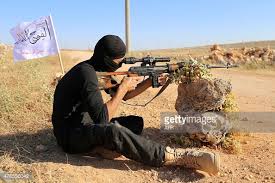 A Rebel fighter from the “First Battalion” under the Free Syrian Army takes part in military training on June 10, 2015,
Share:
Key lawmakers have moved to slash funding of a secret CIA operation to train and arm rebels in Syria, a move that U.S. officials said reflects rising skepticism of the effectiveness of the agency program and the Obama administration’s strategy in the Middle East.

The House Intelligence Committee recently voted unanimously to cut as much as 20 percent of the classified funds flowing into a CIA program that U.S. officials said has become one the agency’s largest covert operations, with a budget approaching $1 billion a year.

“There is a great deal of concern on a very bipartisan basis with our strategy in Syria,” said Rep. Adam B. Schiff (Calif.), the ranking Democrat on the intelligence panel. He declined to comment on specific provisions of the committee’s bill but cited growing pessimism that the United States will be in a position “to help shape the aftermath” of Syria’s civil war.

The cuts to the CIA program are included in a preliminary intelligence spending bill that is expected to be voted on in the House next week. The measure has provoked concern among CIA and White House officials, who warned that pulling money out of the CIA effort could weaken U.S.-backed insurgents just as they have begun to emerge as effective fighters. The White House declined to comment.

Recent CIA assessments have warned that the war is approaching a critical stage in which Syrian President Bashar al-Assad is losing territory and strength, and might soon be forced to relinquish all but a narrow corridor of the country to rebel groups — some of them dominated by Islamist militants.

“Regime losses across the front lines are edging the conflict closer to [Assad’s] doorstep,” a U.S. intelligence official said, speaking on the condition of anonymity. The Syrian president “is not necessarily on the verge of defeat,” the official said, noting that Russia and Iran continue to support him and could help him stave off collapse. But because of regime losses in Idlib and elsewhere, the official said, “many people are starting to openly talk about an endgame for Assad and Syria.”

The projections have prompted a flurry of discussions at the White House, CIA, Pentagon and State Department regarding post-Assad scenarios, officials said, and whether U.S.-backed moderate forces will be in a position to prevent the country from being overrun by extremist groups, including the Islamic State, which has beheaded Western hostages and declared a caliphate encompassing large parts of Syria and Iraq.

This week, President Obama expanded the U.S. military’s role against the Islamic State, unveiling plans to deploy U.S. advisers to new bases in Iraq, while announcing no change to the limited American-led bombing campaign that began in Iraq and Syria last year. A separate Defense Department program authorized to train moderate fighters to combat the Islamic State has not yet begun.

But the sudden contraction of Assad’s sphere of control has focused renewed attention on Syria and the CIA program set up in 2013 to bolster moderate forces that still represent the United States’ most direct involvement on the ground in Syria’s civil war.

The cost of that CIA program has not previously been disclosed, and the figure provides the clearest indication to date of the extent to which the agency’s attention and resources have shifted to Syria.

At $1 billion, Syria-related operations account for about $1 of every $15 in the CIA’s overall budget, judging by spending levels revealed in documents The Washington Post obtained from former U.S. intelligence contractor Edward Snowden.

U.S. officials said the CIA has trained and equipped nearly 10,000 fighters sent into Syria over the past several years — meaning that the agency is spending roughly $100,000 per year for every anti-Assad rebel who has gone through the program.

The CIA declined to comment on the program or its budget. But U.S. officials defended the scale of the expenditures, saying the money goes toward much more than salaries and weapons and is part of a broader, multibillion-dollar effort involving Saudi Arabia, Qatar and Turkey to bolster a coalition of militias known as the Southern Front of the Free Syrian Army.

Much of the CIA’s money goes toward running secret training camps in Jordan, gathering intelligence to help guide the operations of agency-backed militias and managing a sprawling logistics network used to move fighters, ammunition and weapons into the country.

The move by the House intelligence panel to cut the program’s funds is not mentioned in the unclassified version of the spending bill. But statements released by lawmakers alluded to some of their underlying concerns, including a line calling for an “effort to enhance the metrics involved in a critically important [intelligence community] program.”

That language, officials said, was a veiled reference to members’ mounting frustration with the program and a perceived inability by the agency to show that its forces have gained territory, won battles or achieved other measurable results.

“Assad is increasingly in danger, and people may be taking bets on how long he can last, but it’s largely not as a result of action by so-called moderates on the ground,” said a senior Republican aide in Congress, who spoke on the condition of anonymity, citing the sensitivity of the subject.

In the past two years, the goal of the CIA’s mission in Syria has shifted from ousting Assad to countering the rise of extremist groups including al-Qaeda affiliated Jabhat al-Nusra and the Islamic State, which is also known as ISIS and ISIL.

“Unfortunately, I think that ISIS, al-Nusra and some of the other radical Islamic factions are the best positioned to capi­tal­ize on the chaos that might accompany a rapid decline of the regime,” Schiff said.

Even defenders of the CIA program acknowledge that moderate factions in Syria have often performed poorly and are likely to be overwhelmed in any direct showdown with the Islamic State.

Still, officials said U.S.-backed fighters have made significant gains in recent weeks — including the seizure of a government army base — and represent the only meaningful prospect for the United States and its allies to maintain a foothold in the country if Assad falls.

“This is especially true in southern Syria, where [the U.S.-backed coalition] is emerging as a significant force capable of capturing key regime bases,” the U.S. intelligence official said. “Slowly but surely, U.S. government support to the moderate opposition forces has paid off.”

Opposition leaders in southern Syria, where the CIA-trained fighters are concentrated, said the groups have recently become better organized and more effective in their use of heavier weapons, including U.S.-made TOW antitank missiles.

“They have coherent command and control and have unified Sunni groups,” said Oubai Shahbandar, a former top adviser to the opposition leadership who maintains regular contact with rebels on the ground. Moderate militias have kept control of border crossings into Jordan and the Israeli-occupied Golan Heights and are fighting on the outskirts of Damascus.

The training program, Shahbandar said, “is a precedent in terms of what works.” Rather than cut funds, he said, the United States “should really double down on its southern program.”

Rebel units in the area have set up functioning civilian governments that could be models for the kind of political transition the United States says it seeks as a replacement for Assad, said Lina Khatib of the Carnegie Middle East Center.

Despite those gains south of Damascus, experts and officials said that the most significant pressure on Assad’s regime is in northern Syria, where the Islamic State is on the offensive. At the same time, a separate coalition of rebel groups known as the Army of Conquest has taken advantage of infusions of new weapons and cash from Saudi Arabia, Turkey and Qatar.

The intelligence spending bill would set budgets for the fiscal year beginning in October. The chairman of the House intelligence panel, Rep. Devin Nunes (R-Calif.), declined a request for an interview.

The Senate Intelligence Committee is expected to begin work this month on its own budget for U.S. spy agencies. U.S. officials said the White House has signaled that it will seek to persuade the Senate panel to protect the CIA program from the cuts sought by the House.