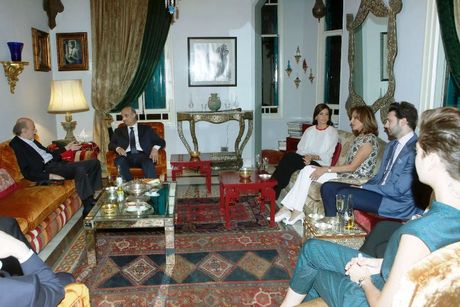 They discussed “the political situation in Lebanon and the region and mainly the massacre of Qalb Lawzah in Idlib province in Syria,” said the statement.

They stressed “their rejection of these terrorist activities and their keenness on stability and coexistence whether in Syria or Lebanon,” it added.

After the meeting, Jumblatt hosted  a dinner banquet in honor of his guests.

Al-Qaida’s affiliate in Syria al-Nusra Front massacred dozens of  Druze villagers in Qalb Lawzah on Wednesday. According to  sources in Qalb Lawzah about 40 Druze civilians were killed , including children and elderly  but only 27 have been identified so far

The killings are the deadliest against the Druze Community , which has been split between supporters and opponents of President Bashar Assad since Syria’s crisis began in March 2011.