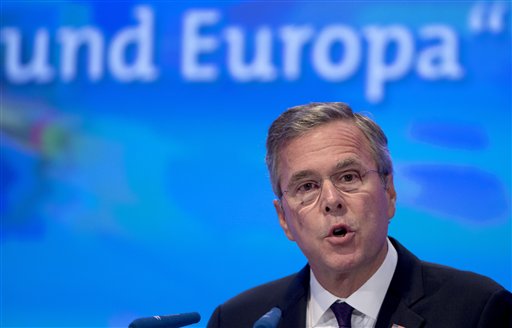 Former US Governor Jeb Bush speaks at the Economic Council in Berlin, Germany, Tuesday, June 9, 2015. The Economic Council is a German business association representing the interests of more than 11,000 small and medium sized firms, as well as larger multinational companies. Text in the background reads ‘and Europe’. (AP Photo/Michael Sohn)
Share:

Republican presidential contender Jeb Bush is warning Russia that if he becomes president, the U.S. will step up its actions to counter Vladimir Putin’s aggression, especially in Ukraine and eastern Europe, and seek to “isolate his corrupt leadership from his people.”

In his first foreign speech of the 2016 campaign, Bush criticized what he called dramatic declines in U.S. military spending, suggesting that has undercut credibility as Washington and its allies confront threats in Eastern Europe and elsewhere. Putin, he said, must know in advance that there will be consequences to his actions, because he is a ruthless pragmatist who “will push until someone pushes back.”

Bush addressed a major economic conference in Berlin and took questions from the audience as part of a trip that precedes his planned announcement in Miami on Monday that he is running for the 2016 nomination. He’s also visiting former Eastern bloc countries Poland and Estonia.

Without many specifics, Bush called for the deepening of economic and security ties with eastern European nations, vulnerable to Russian meddling. “Russia must respect the sovereignty of all of its neighbors,” Bush said. But as NATO confronts crisis, he said, it must do so in a way that does not push Russia away for another generation.

The U.S. and Germany — as well as Poland and Estonia — are NATO allies that work closely together on a host of diplomatic issues, among them Ukraine and Iran’s nuclear program. Germany is also the U.S.’s strongest European trading partner, and Bush has praised Estonia and Poland as fast emerging free-market success stories.

President Barack Obama on Monday wrapped up a two-day Group of Seven meeting at a Bavarian resort where he and German Chancellor Angela Merkel affirmed ties between the two nations.

And while it’s popular for Republican presidential prospects to condemn Putin, it’s also a way to criticize the Obama administration’s foreign policy, carried out during his first term by then Secretary of State Hillary Rodham Clinton, now a Democratic presidential candidate.

Bush has said Obama has ceded to Germany too much of the diplomatic burden in Europe, chiefly for rallying approval for sanctions against Russia for its backing of pro-Russian separatists in Ukraine. European leaders, particularly French President Francois Hollande and Merkel, have taken the lead on Russian-Ukraine peace agreements.

Last week, Bush aides confirmed that he plans to seek the 2016 Republican nomination, as has been widely expected since he formed a political action committee early in the year and began raising tens of millions of dollars to fuel it.

Bush is expected to meet Merkel informally Tuesday evening, though not privately. They were both addressing the economic council of the Christian Democratic Union, the political party Merkel leads.

Although Jeb Bush has traveled extensively overseas while and since serving two terms as Florida governor, the trip is aimed primarily at strengthening his credentials overseas. Governors who run for president often lack foreign policy experience or are seen that way.