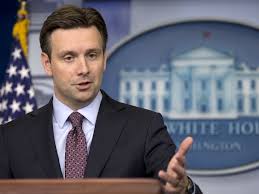 The Secret Service entered the Brady briefing room just after 2 p.m., about a half hour after the briefing began, while a reporter was asking White House press secretary Josh Earnest a question about cybersecurity. Press were evacuated from the room, and allowed to return about a half hour later.

The rest of the White House was not evacuated. President Obama was inside the executive mansion at the time of the evacuation, and remained there while the room was cleared out. Earnest said he was “certainly” not aware of any threat to the president.

When the briefing resumed, Earnest said that “a telephonic bomb threat concerning the room that we are now all in” was phoned in to local police.

“Local police department contacted Secret Service officials who determined, that for the safety of all of us, they needed to evacuate the room and to sweep it,” he said.

When asked about the more than 20 minutes between when the call came in and the evacuation, Earnest said, “I don’t know how long it took for the information to be transmitted to the Secret Service and for the decision to be made to evacuate the room but the evacuation was conducted to protect the safety of all of us.”

President Obama returned to the White House from a speech at the Washington Marriott Wardman Park at 12:41 p.m., according to pool reports.

Earlier in the day, Capitol Police evacuated several floors in the Dirksen Senate office building after a caller reported a suspicious package, an unattended lunch cooler in the Russell Courtyard. Capitol Police found “nothing hazardous” after checking it out.

During the investigation, business elsewhere continued as usual. The Capitol’s subway continued to run to Dirksen, and the building’s cafeteria and coffee shop remained open. People were allowed back to the affected floors after Capitol Police cleared the area.