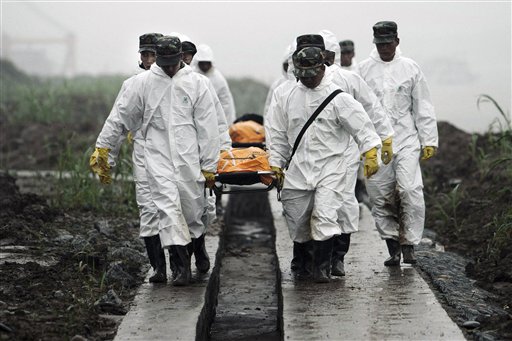 Rescuers carry the bodies of victims recovered from the capsized tourist ship in Yangtze River in Jianli county in central China’s Hubei province Wednesday June 3, 2015. Chinese authorities deployed scores more divers and a large crane as they escalated efforts Wednesday to recover more than 410 people believed to be trapped inside an overturned river cruise ship. (Chinatopix Via AP) CHINA OUT
Share:

The death toll from a Chinese cruise ship which capsized during a storm in the Yangtze River jumped to 396 on Saturday, leaving fewer than 50 still missing, as the boat operator apologized and said it would cooperate with investigations.

Only 14 survivors, one of them the captain, have been found after the ship carrying 456 overturned in a freak tornado on Monday night.

Rescuers are searching the cabin of the ship, which was righted and raised on Friday, looking for more bodies.

The top and bottom floors of the four-level ship are the current focus of the search, but because of the level of damage it may take some time to complete, state television said.

Jiang Zhao, general manager of the company which operated the Eastern Star, bowed in apology for the disaster during an interview with state media reported late on Friday, saying they would “fully” cooperate with the investigation.

Beijing has pledged there would be “no cover-up” in the probe.

Police have detained the captain and chief engineer for questioning as part of the investigation. An initial probe found the ship was not overloaded and had enough life vests on board.

The disaster has now caused a higher toll than the sinking of a ferry in South Korea in April 2014 that killed 304 people, most of them children on a school trip. It is also China’s worst shipping catastrophe in seven decades.

More than 1,400 family members have come to Jianli in the central province of Hubei, where the ship went down, with many expressing frustration at the lack of information from the government.

The government says that it is doing everything possible to help the relatives, including providing free accommodation and medical services, and on Saturday state television ran an interview with a tearful family member saying how happy she was with all their help.

But relatives speaking to Reuters have expressed concern about security apparently being aimed at them, including the number of police cars parked outside of hotels where they are staying.

On Saturday morning, a daily government briefing for family members was cut short after an argument broke out with a representative of the local government. One woman was carried out of the briefing after she fainted.

“There is no information at all. Everyday we’re here procrastinating, wasting time. There’s no clear-cut answers, there’s no progress to inform us of,” said Wang Shuang, 24, whose mother and uncle were on the boat.

Aware of the sensitivity of the disaster, the ruling Communist Party’s Politburo Standing Committee, China’s apex of power, this week called on local authorities to “earnestly safeguard social stability”.