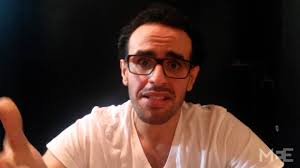 An Egyptian-American jailed in Egypt for nearly two years for involvement in the outlawed Muslim Brotherhood has been released and is headed for the United States, his family said on Saturday.

Mohamed Soltan was among thousands detained after Islamist president Mohamed Mursi was toppled in 2013 by the military under Abdel Fattah al-Sisi, who is now president.

An Egyptian court had condemned Soltan’s father, Salah, to death.

“By the grace of God, we are incredibly happy to confirm that Mohamed is on his way home after nearly two years in captivity,” wrote Soltan’s sister Hanaa on Facebook.

“After extensive efforts, the U.S. Government has successfully secured Mohamed’s deportation back home to the U.S., mercifully concluding this dark chapter for Mohamed and our family.”

The family has run a campaign to free her 27-year-old brother, who had been on hunger strike in detention and has appeared emaciated in photographs. His U.S. citizenship meant U.S. officials had called for an end to his detention, citing concerns about his health.

The United States welcomed his release on Saturday, with a State Department official saying: “We believe this step brings a conclusion to this case and we are glad Mr. Soltan will now be reunited with his family in the United States.”‎
A court said Mohamed had supported the Islamist movement and transmitted false news. His family denies he was a member of the Brotherhood, unlike his father, who was a senior figure in the group.

“As you can imagine, after spending several hundred days on hunger strike, and many months in solitary confinement, Mohamed’s health is dire,” said Hanaa.

“He will receive medical treatment as soon as he arrives on U.S. soil and will spend the immediate future with his family recovering.”

After toppling Mursi, Sisi launched the toughest crackdown on Islamists in Egypt’s history. Security forces killed hundreds at street protests and jailed thousands of others.

The White House had condemned Mohamed’s life sentence, which in Egypt would typically mean 25 years.

Hanaa told Reuters in April that her brother, who had studied at Ohio State University, had hoped for peaceful change in Egypt following the 2011 overthrow of long-term president Hosni Mubarak.

Egypt has declared the Brotherhood a terrorist group and accused it of carrying out bombings. The Brotherhood says it is a peaceful movement committed to democracy.