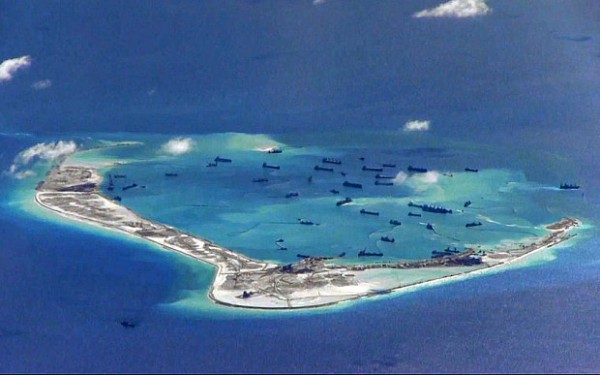 Chinese dredging vessels in the waters around Mischief Reef
Share:

China’s armed forces are to extend their operations and its air force will become an offensive as well as defensive force for the first time, in a major shift in policy that will strengthen fears of accidental conflict.

A policy document by the state council, or cabinet, said China faced a “grave and complex array of security threats”, justifying the change.

The People’s Liberation Army, including its navy and air force, will be allowed to “project power” further beyond its borders at sea and more assertively in the air in order to safeguard its maritime possessions, the white paper stated.

The navy will add “open seas protection” to a traditional remit of “offshore waters defence”, it said.

The posture risks escalating the tension over disputed islands in the South China Sea and elsewhere in the Pacific, where the United States is determined to protect the interests of allies like Taiwan and the Philippines.

Only last week, a US aircraft ignored repeated warnings from the Chinese military to fly a reconnaissance mission over the islands.

Global Times, a tabloid newspaper run by the Communist Party, said that China might have to “accept” there would be conflict with the United States.

“If the United States’ bottom line is that China has to halt its activities, then a US-China war is inevitable in the South China Sea”, said the paper, which is often seen as a mouth-piece of hardline nationalists in the government in Beijing.

State media reported on Tuesday that Beijing had begun building two lighthouses on reefs in the Spratly Islands, a smattering of outcrops that are claimed by an array of countries including not only China but also Vietnam and the Philippines.

Last month, satellite imagery revealed the Chinese had almost completed an air strip on another reef – Fiery Cross – while they are turning another rock, Mischief Reef, into a full island through land reclamation.

The Global Times article described the construction of runways, harbour facilities and buildings on the disputed Spratly Islands as the nation’s “most important bottom line”.
Speaking at a press conference in Beijing, Yang Yujun, a spokesman for the Defence Ministry, dismissed international criticism of China’s policies in the South China Sea, claiming the work was the same as building roads and homes on mainland China and that it would benefit “the whole of international society”.

“From the perspective of sovereignty, there is absolutely no difference”, he said, adding that “some external countries are also busy meddling in South China Sea affairs”.

Analysts say neither Washington nor Beijing appear to be in the mood to back down and that there is a serious risk of a minor incident in airspace around the islands escalating rapidly.

“I think the concern has to be that China misjudges the situation”, said Robert Dujarric, director of the Institute of Contemporary Asian Studies at the Japan campus of Temple University.

“Neither party wants a war if it can be avoided, but there are red lines for both sides”, he said. “I worry whether Beijing considers the US to be a declining power and assumes that Washington will back down if it shoots down a US observation aircraft”. 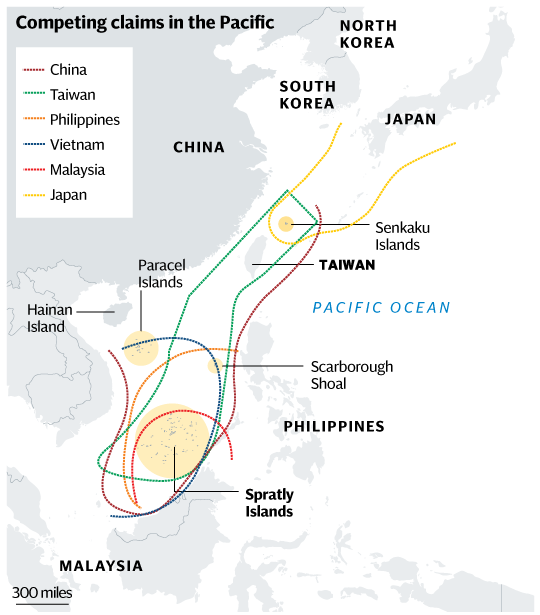 Washington chose to “de-escalate” a major crisis that blew up after a Chinese fighter collided with a US Navy intelligence-gathering aircraft off Hainan Island in April 2001.

However, Prof. Dujarric said there would be a different response if a similar incident were to occur in what Washington insists is international air space over the South China Sea.

Recent developments have provoked new concerns in the region, with Ma Ying-jeou, the president of Taiwan, calling for the different nations laying claim to the South China Sea to put their differences aside and carry out joint development of natural resources.