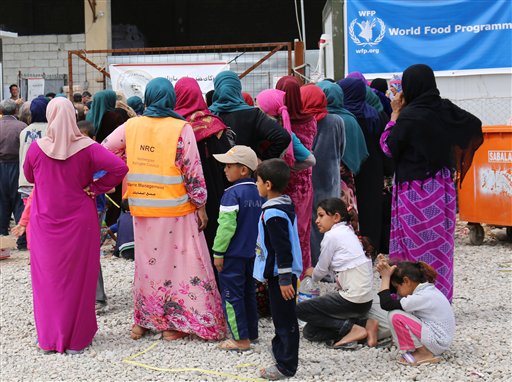 In this photo taken on Saturday, March 28, 2015, displaced Iraqis wait in line to receive food in Baharka camp for Iraqi displaced people outside of Irbil, Iraq. Decades of war and international sanctions have left millions of Iraqis traumatized after seeing loved ones killed or being uprooted from their homes. The medical infrastructure in the country, however, is ill-served to treat them. The situation has been exacerbated by the latest wave of fighting in the north, which has displaced tens of thousands of Sunnis, Kurds, and Yazidis, sending new flows of traumatized people into overcrowded camps for the displaced. (AP Photo/ Maeva Bambuck)
Share:

CHAMISHKO CAMP, Iraq — The group of women, members of Iraq’s Yazidi religious minority, first did deep breathing as a relaxation technique. Then, as their children played in the center of the room, they talked about the traumas they had lived through when Islamic State extremists rampaged through their town.

Muna Murad spoke of the sorrow that overwhelms her when she’s reminded of her brother-in-law, who was killed by the militants before her eyes. “Whenever I see his two kids playing with mine, I have trouble breathing,” she said.

With such group counselling sessions, international aid groups are trying to help at least some of the hundreds of thousands of Iraqis who fled from their homes to escape the Islamic State and now live crammed into multiple camps like Chamishko around the north. But the efforts are a drop in the ocean in a county where an overwhelming number of people are dealing with mental trauma and where there are almost no facilities to help them.

The IS rampage across northern and western Iraq the past 18 months only adds a new generation of traumatized Iraqis after decades of war and conflict. From the long Iraq-Iran war in the 1980s, to the 1991 Gulf War, through the U.S.-led invasion in 2003 and the sectarian slaughter that followed, Iraqis have witnessed untold horrors and suffered the agonies of displacement.

Dr. Emad Abdul-Razzaq, the adviser on mental health issues to the Health Ministry, estimates that 40 to 50 percent of Iraq’s 33 million people have been affected by the trauma of the last few decades, in some cases causing serious personality changes like increased anger, anxiety and aggressiveness.

This in a country where there are only 130 licensed psychiatrists. There are just 2,000 beds in mental hospitals nationwide — 80 in the northern Kurdish city of Sulaimaniyah, the rest in the capital Baghdad. A mental health hospital planned in the southern city of Diwaniya will be the country’s first new facility in 60 years.

Helped by organizations like Doctors Without Borders, Iraq has struggled to provide more mental health services, setting up centers in hospitals and training regular doctors to provide some counseling. But the effort is hamstrung by lack of funding. “We have accumulated problems, and the policymakers in the past have not made mental health support a priority,” said Abdul-Razzaq.

At Baghdad’s Ibn Rushd hospital mental health center, which sees about 150 patients a day, Dr. Mohammed Koreishi said the staff has tried to increase awareness in the public about the benefits of professional mental health care and overcome the strong social stigma against it. But he said there’s a profound lack of trained professionals, including clinical psychologists and counselors.

“We have a problem in Iraq that doctors don’t like to specialize in psychiatry because it has the poorest economic status — not like a surgeon,” he said. At his center, patients are mainly treated with medication such as mood stabilizers, anti-psychotics and antidepressants, with limited recourse to counseling.

The vast majority of Iraqis are left to deal with their traumas on their own, and the causes of trauma can be varied and unexpected.

At Baharka, another camp for the displaced, Muntaha Salih Khalaf described how her life started to fall apart. In 2006, an American soldier patrolling in her Sunni neighborhood of the northern city of Mosul started asking her neighbors about her, referring to her as “the beautiful girl.” He even visited her home once when her husband wasn’t there, an unforgiveable breach of conduct in her deeply conservative community that sparked rumors that she was having an affair.

Her neighbors started calling her a prostitute and her husband’s family began sending threatening text messages. When her latest pregnancy began to show there was even talk that the soldier was the father, she said. Her husband, Mohammed Abdullah, decided to move the family to Damascus. But the stress of having her whole neighborhood turn against her had driven Khalaf into depression, severe mood swings and increasingly erratic behavior.

Then one day in Damascus, feeling that she had to get rid of everything and start anew, she set the house on fire.

“My whole family has become like a sick body infected by me because of my mental issues,” said Khalaf, a 40-year-old mother of eight. Her husband finally got the family to the Baharka camp, where she is now receiving group therapy and individual treatment for bipolar disorder.

“This has saved me as a mother and as a wife,” she said. “I am meeting with people here who are supporting me and giving me advice on how to confront life.”

Losing one’s home is one of the biggest stress factors that can raise mental health issues — and since January 2014, more than 2.7 million Iraqis have fled their homes because of the IS advance, about a third of them flowing into camps in and around the northern Kurdish region. UNICEF, the International Red Cross, Doctors Without Borders and other international agencies have set up programs in the camps to try to address the mental health issues through counseling rather than medication.

“They have lost close relatives. They are still in mourning, they have a lot of anger and anxiety,” said Olivia Nevissas, the psycho-social activities coordinator for Handicap International at Baharka camp near Irbil. “Six months after the conflict, they have had very few moments to let go of their emotions, to verbalize what they have gone through, and that’s why those sessions fill a void.”

The group sessions with women have been the biggest success. Organizers say they can tell it’s benefiting them because the women take time out of their busy days of cleaning and taking care of their children and the elderly to attend and talk.

It is more difficult with the men, who often are reluctant to express themselves in a group. Instead, they gather in political discussions or music performances that can have some of the same therapeutic effects.

The hardest part of Handicap International’s work, however, is the children, many of whom are just too young put their emotions into words.

Asya, a very young looking 13, smiles a lot, stares off into the distance and shakes her head, but she doesn’t speak. Her father, Aido, said she was having trouble in school even before they had to flee 10 days on foot from Islamic State fighters who attacked their home in Sinjar, a mainly Yazidi area in northwestern Iraq. They are now staying at an abandoned construction site next to Chamishko camp.

“My youngest daughter is sick, her mental state isn’t normal,” he said, while his daughter held his hand after he collected the girl and her sister from a group therapy session.

Kureishi, at Baghdad’s Ibn Rushd medical center, said his hospital often deals with children suffering from mood disorders, disruptive behavior, bed wetting, and high anxiety, which they treat initially with medication. While men have more room in society to engage in life outside the home to work through their problems, “the effect is more on women and children,” he said. “They are less supported in society.”