Vatican concludes its first treaty that recognizes the State of Palestine 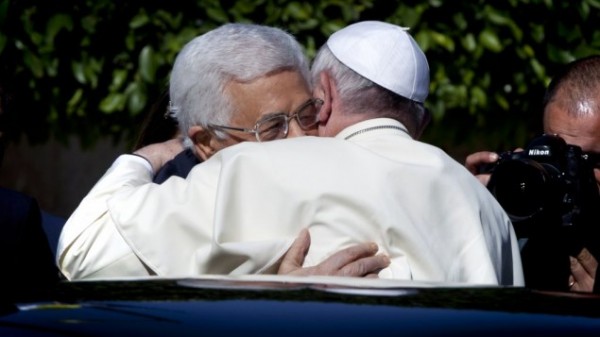 Palestinian Authority President Mahmoud Abbas (left), and Pope Francis (right) hug each other as Francis arrives at the PA headquarters in the West Bank city of Bethlehem, May 25, 2014. (photo credit: AP/Nasser Nasser)
Share:
The Vatican concluded its first treaty that formally recognises the State of Palestine, with an agreement on Catholic Church activities in areas controlled by the Palestinian Authority, the Holy See said on Wednesday.

The agreement “aims to enhance the life and activities of the Catholic Church and its recognition at the judicial level,” said Monsignor Antoine Camilleri, the Vatican’s deputy foreign minister who led its six-person delegation in the talks.

The text of the treaty has been concluded and will be officially signed by the respective authorities “in the near future,” a joint statement released by the Vatican said.

Vatican officials stressed that although the agreement was significant, it certainly did not constitute the Holy See’s first recognition of the State of Palestine.

The treaty announcement comes days before Francis is to meet Palestinian President Mahmoud Abbas, who plans to attend a Mass on Sunday that will make saints of two Palestinian-born nuns who lived in the 19th and early 20th centuries.

During a three-day visit to the Middle East a year ago, Pope Francis delighted his Palestinian hosts by referring to the “state of Palestine”, giving support for their bid for full statehood recognition, and the new treaty further solidifies the relationship between the Vatican and Palestinians.

European Jewish Congress President Moshe Kantor called the treaty “unfortunate”, saying it would “diminish the chances of a negotiated peaceful resolution of the conflict and embolden extremists”.

Abraham Foxman of the Anti-Defamation League said the treaty was “premature” and said it would undermine a negotiated, two-state solution to the conflict.

In an interview with the Vatican’s official newspaper, L’Osservatore Romano, the Vatican’s deputy foreign minister Camilleri said he hoped the agreement would indirectly help the Palestinian State in its relations with Israel.

“It would be positive if the accord could in some way help with the establishment and recognition of an independent, sovereign and democratic State of Palestine which lives in peace and security with Israel and its neighbours,” he said.