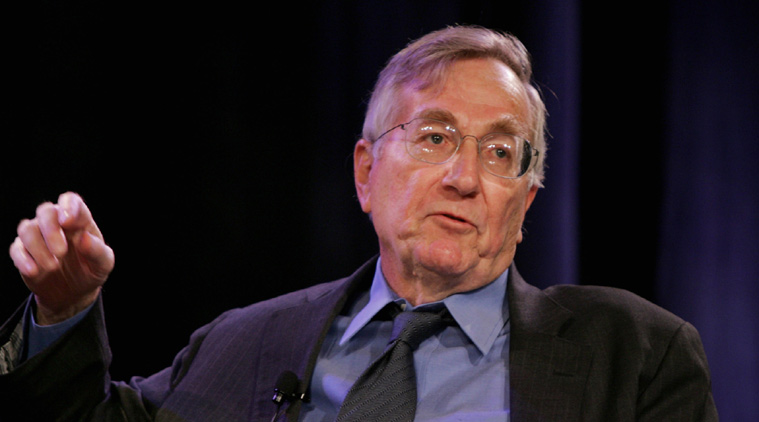 Veteran American journalist Seymour Hersh has claimed that Osama bin Laden was a prisoner of Pakistan’s intelligence agency ISI at the Abbottabad compound since 2006, and that a Pakistani intelligence officer gave him up to the US in return for a $25 million reward.

Writing in the London Review of Books on the fourth anniversary of the Abbottabad raid that killed bin Laden, Hersh claimed that the then Pakistan army chief, General Ashfaq Parvez Kayani, and head of ISI, Lt General Ahmed Shuja Pasha, knew of the US Navy Seals’ raid and made sure that the two helicopters carrying the Seals to Abbottabad crossed Pakistani airspace without triggering an alarm.

Bin Laden was killed in Abbottabad, home to the Pakistan Military Academy, on the night of May 2, 2011, in a CIA-led operation conducted by Seal Team Six of the US Navy.

Hersh won the 1970 Pulitzer Prize for International Reporting after he broke the story on the My Lai massacre in 1969 during the Vietnam War. His reports in 2004 on the US military’s ill-treatment of detainees at Abu Ghraib prison in Iraq also drew global attention.

As per the official US version, bin Laden’s location at Abbottabad was identified by the CIA by tracking an al-Qaeda courier, Abu Ahmed al-Kuwaiti. Hersh, however, claims that a former senior Pakistani intelligence officer betrayed the secret of bin Laden’s presence at Abbottabad in return for the $25 million reward offered by the US.

In August 2010, this Pakistani intelligence officer, who has since been relocated with his family to Washington and is a consultant to the CIA, walked into the office of the CIA Station Chief at the US embassy in Islamabad. Allowing the CIA Station Chief, Jonathan Bank, to be named in a criminal suit for murder which led to him being moved out of Pakistan soon after was part of an elaborate cover-up of its complicity by the ISI, according to Hersh.

The walk-in, Hersh claims, had told the US that bin Laden had lived undetected from 2001 to 2006 with some of his wives and children in the Hindu Kush mountains, and that “the ISI got to him by paying some of the local tribal people to betray him.”

Bin Laden was very ill, and that early on in his confinement at Abbottabad, the ISI had ordered Amir Aziz, a doctor and a major in the Pakistani army, to move near his compound to provide treatment. Aziz was also given a part of the $25 million reward because he got the DNA sample which conclusively proved that it was bin Laden in Abbottabad.

Hersh claims that Saudi Arabia had been financing bin Laden’s upkeep since his seizure by the ISI. While he agrees that US President Barack Obama did order the raid, he claims that many other aspects of the US government’s account are false. Hersh also says that bin Laden was never buried at sea, as claimed by Obama, and some of his body parts were tossed out over the Hindu Kush mountains by the Seals as they returned to to Jalalabad in Afghanistan.

Former CIA official said Monday Hersh’s story is just “not plausible.”
“Bits and pieces you could say are plausible, but when you put the whole conspiracy theory together, no, it is not plausible,” Robert Grenier, the CIA’s former top counterterrorism official, told Business Insider. “It simply isn’t the way that government works.”

Grenier acknowledged that Hersh has an impressive record of important stories. Indeed, Hersh won wide acclaim for his reporting on the My Lai massacre, a horrific mass killing of unarmed civilians in Vietnam. However, some experts have called the seasoned reporter’s recent stories into question.

“Sy Hersh has obviously broken some major stories in the past. No one can take that away from him,” Grenier said. “But a story like this is wild, not credible, and thinly sourced. It just strikes me as irresponsible.”

Hersh’s assertion that the US government pressured the Pakistanis to turn over bin Laden does not line up with how foreign aid works, according to Grenier.

“The US government uses assistance as a tool to encourage or discourage different behaviors, but the idea that you could calibrate this — you could turn the spigot slightly — it just doesn’t work that way,” Grenier said. “It’s a much cruder tool.”

While it was possible that a single source could have access to the information that Hersh describes, the source would need to be high up in the CIA, according to Grenier. But that’s unlikely, he said.

“If [deputy CIA director] Michael Morell were the source, then yeah, it’s quite possible,” Grenier said. “I guess that would add another twist to the conspiracy that he’s coming out and denouncing the whole thing.”

Morell, for his part, also denounced Hersh’s reporting. In an interview with CBS News, the former deputy director said that report was almost entirely false.

“It’s all wrong,” former CIA deputy director Mike Morell said. “I started reading the article last night and I got a third of the way through because every sentence I was reading was wrong.”