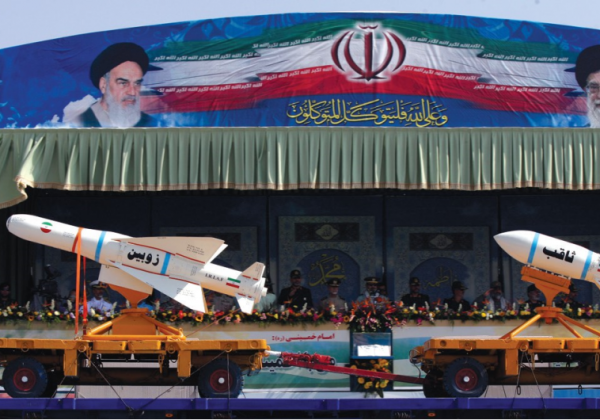 The Arab Gulf states appear to have lost confidence in America: and started taking matters into their own hands. It is the beginning of the fallout from Obama’s decision to align so closely with Tehran. They see Obama as playing middleman to Iran as it hopes to take over Yemen , Iraq, , Lebanon and Syria
Share:

By: Jennifer Rubin
Max Boot explains that “because the Obama administration is refusing to do anything to oust Bashar Assad, the Saudis are getting together with the Turks and Qataris to back some of the more fundamentalist Islamist fighters working against the Assad regime—including, it is rumored, the Nusra Front, an Al Qaeda affiliate.” He continues:

This is what happens when the Gulf states lose confidence in America: they start taking matters into their own hands and that means they will increasingly forge a pact with extreme Islamists, possibly even with ISIS, because they see the extremists as the only reliable barrier to the spread of Iranian influence.

This is a catastrophic if wholly predictable development, and it is only the beginning of the fallout from Obama’s decision to align so closely with Tehran. The next step in the Sunni pushback is, as the Saudi leadership has loudly and long signaled, for them to acquire their own nuclear weapon.

This did not suddenly come to a head. Liberal pundits and conservative foreign policy experts alike realize that the refusal of four of six Gulf heads of state to meet with President Obama was a public slap at a president who is seen as naive and unhelpful. Danielle Pletka at the American Enterprise Institute observes: “On the one hand, the notion of any Arab leader snubbing any president of the United States is offensive. On the other, it’s hard not to see their point of view: the United States has deliberately withdrawn from the region, and insofar as it remains, the interests of our erstwhile allies – from Israel to Saudi Arabia – are not first and foremost in the mind of this White House. Worse yet, Gulf countries, now engaged in what they see as a pitched battle for the future of the region, see Washington doing Iran’s bidding: helping Bashar al Assad stay in power; playing middleman to Iran as it hopes to take over Yemen via proxies; providing air cover for Iranian led militias in Iraq, and more. And while some of the suspicions of the Sunni leaders in the region are overblown, sadly, many are not.”

For several years now in private and sometimes in public, the Saudis and their Gulf neighbors have been urging the president to stand up to Iran. They see feckless action on the part of the United States. They see the administration at odds with Israel — and if Israel gets thrown under the bus, they can only imagine what their fate might be. They see serial capitulation at the bargaining table over nukes while the United States cuts its military, has abandoned Libya and failed to adopt a coherent approach to the Arab Spring.

The Iranians, of course, are not our friends and seem to take delight in taunting the United States with threats, quarreling with what has already occurred and publicly drawing their own red lines. As the Wall Street editorial board notes, “Arab leaders have already shown how little trust they put in Mr. Obama’s assurances. Saudi Arabia’s war against Yemen’s Houthis came after the Administration had made overtures to the Iranian-backed militia earlier in January. Last month King Salman cashiered his half-brother as Saudi crown prince and replaced him with his tough-minded nephew Muhammad bin Nayef, who believes in more vigorous Sunni Arab self-defense.” In short, we’ve managed to alienate Israel and the Sunni leaders while earning the contempt of Iran. A trifecta of diplomatic incompetence.

But it is the same story around the globe. The White House appeased Russia (letting it into the World Trade Organization, pulling out missile defenses from Europe, foot-dragging on human rights, etc.) while failing to come to the aid of Ukraine. Another lose-lose.

The Palestinian-Israeli conflict? Both sides distrust us and have stopped talking. Asia? We promised a pivot to that region and to support our democratic allies. But we’ve done little to comfort them while making no headway on China’s cyberterrorism, territorial ambitions and human rights. Again, we’ve managed to make our friends nervous and our foes contemptuous.

America recedes, we try to “understand” and earn the trust of foes, we push allies to the breaking point and we refuse to stand up for our own interests and values — there’s the Obama foreign policy in a nutshell. We are now facing new wars, an unprecedented level of Islamic terror threats and nuclear proliferation. And the co-architect of this, Hillary Clinton, is embracing this record while asking for a promotion to commander in chief. Go figure.