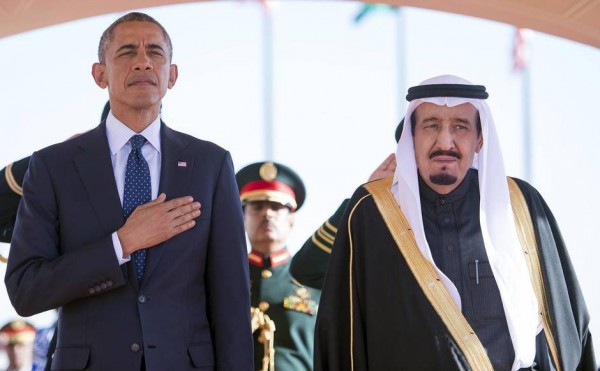 Saudi Arabia announced Sunday that its new monarch will not attend meetings at the White House with President Barack Obama or a summit at Camp David this week, in an apparent signal of its continued displeasure over U.S. relations with Iran.

As recently as Friday, the administration said King Salman bin Abdul-Aziz Al Saud would be coming to “resume consultations on a wide range of regional and bilateral issues,” according to Eric Schultz, a White House spokesman.

But on Sunday, the state-run Saudi Press Agency said the king would instead send Crown Prince Mohammed bin Nayef, the Saudi interior minister. The agency said the summit meeting would overlap with a five-day cease-fire in Yemen that is scheduled to start Tuesday to allow for the delivery of humanitarian aid.

Arab officials said they viewed the king’s failure to attend the meeting as a sign of disappointment with what the administration was willing to give as reassurance that the U.S. would back its Arab allies against a rising Iran.

A senior administration official said White House officials did not believe that Salman’s absence was because of any disagreement.

Jon Alterman, senior vice president with the Center for Strategic and International Studies, said Salman’s absence is both a blessing and a snub.

“It holds within it a hidden opportunity,” he said, “because senior U.S. officials will have an unusual opportunity to take the measure of Mohammed bin Salman, the very young Saudi defense minister and deputy crown prince, with whom few have any experience.”

But he added it “sends an unmistakable signal when a close partner essentially says he has better things to do than go to Camp David with the president, just a few days after the White House announced he’d have a private meeting before everything got underway.”

Secretary of State John Kerry met Friday in Paris with his counterparts from the Arab nations that were invited to the summit — Saudi Arabia, the United Arab Emirates, Qatar, Kuwait, Bahrain, and Oman — to discuss what the Arab nations were expecting from the meeting, and to signal what the U.S. was prepared to offer at Camp David.

But administration officials said the Arab officials had pressed for a defense treaty with the U.S., pledging to defend them if they come under external attack. That was always going to be difficult, as such treaties — similar to what the U.S. has with Japan — must be ratified by Congress.

Instead Obama is prepared to offer a presidential statement, one administration official said, which is not as binding and which future presidents may not have to honor.

The Arab allies are also angry, officials and experts said, about comments Obama recently made in an interview with The New York Times, in which he said allies like Saudi Arabia should be worried about internal threats — “populations that, in some cases, are alienated, youth that are underemployed, an ideology that is destructive and nihilistic, and in some cases, just a belief that there are no legitimate political outlets for grievances.”

At a time when U.S. officials were supposed to be reassuring those same countries that the United States would support them, the comments were viewed by officials in the Gulf as poorly timed, foreign policy experts said.

In Paris on Friday, Kerry said that the U.S. and its Arab allies were “fleshing out a series of new commitments that will create between the U.S. and GCC a new security understanding, a new set of security initiatives that will take us beyond anything that we have had before.”

The king is the latest top Arab official who will not be attending the summit meeting for delegations from members of the Gulf Cooperation Council.

Yousef Al Otaiba, the United Arab Emirates ambassador to the U.S., declined to say exactly what his government was pushing for from the United States when he spoke at a conference in Washington on Thursday.

“The last thing I want to say is ‘Here’s what we need,’” he said at a panel discussion sponsored by the Atlantic Council in Washington. “That’s not the right approach. The approach is, ‘Let’s come here, let’s figure out what the problems are, how we can work together to address our needs.’”

Salman’s decision to skip the summit meeting does not mean that the Saudis are giving up on the U.S. — they do not have many other options, said Karim Sadjadpour, an Iran expert at the Carnegie Endowment for International Peace.

“As upset as the Saudis are, they don’t really have a viable alternative strategic partnership in Moscow or Beijing,” Sadjadpour said.

But, he added, “there’s a growing perception at the White House that the U.S. and Saudi Arabia are friends but not allies, while the U.S. and Iran are allies but not friends.”