Geller has no regrets over organizing Prophet Muhammad cartoon contest 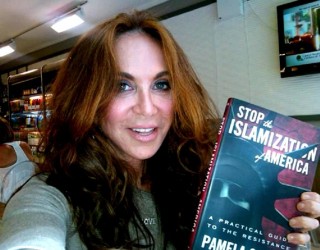 No, she says confidently. In fact, she says, she probably saved lives by hosting the event and plans to have more just like it, with one difference: Next time, she’ll be wearing a bulletproof vest.

“I will continue to speak in defense of freedom until the day I die,” Geller said Thursday in an interview with The Associated Press, as a grim-looking personal security guard hovered nearby. “It’s just that simple. It’s not even a choice. It’s a calling.”

Geller has always hired armed security personnel to protect the scores of events she has spearheaded across the nation in recent years to decry Islamic extremism. But furor over Sunday’s shooting in Garland, Texas, has led to a specific threat against Geller, posted on a website related to the Islamic State group, and the New York Police Department is taking it seriously. Now she doesn’t travel anywhere without protection.

Geller said she believes she saved lives by hosting the contest because the two Muslim gunmen shot to death by police would have picked another soft target and killed innocent civilians.

“Would you regret saving lives?” she asked.

A master of rhetoric and clearly comfortable in the spotlight, the 56-year-old former media executive shifts easily from charming to combative. Her critics have called the cartoon contest needlessly provocative, practically an invitation for violence. But Geller argued that any blame should be focused on extremists who can’t be criticized or lampooned without resorting to violence.

Her activities have prompted the Southern Poverty Law Center to add her to its extremist files, calling her “the anti-Muslim movement’s most visible and flamboyant figurehead.”

In an editorial Thursday, The New York Times said Geller “has a long history of declarations and actions motivated purely by hatred for Muslims” and called the Garland event “an exercise in bigotry and hatred posing as a blow for freedom. … To pretend it was motivated by anything other than hate is simply hogwash.”

Geller was once part of the elite media machine she professes to despise, working for the business operations of the Daily News and the New York Observer. Then, she was a self-described “apolitical” mother who paid little mind to world affairs.

“I loved my fashion. I loved my life. I loved my career,” she said with a smile. “I assumed my freedom. I grew up free, you know? I grew up in the freest country in the world. And I loved it.”

Ignorant of terrorism, Geller said she dived deeply into the Internet to learn more. She joined a burgeoning online community obsessed with jihad and terrorism. She began opining in the comments section. One day in 2004, a fellow commenter encouraged her to create her own blog.

Today, Geller has nearly 68,000 Twitter followers and a devoted army of virtual supporters for her websites, books and public events. As head of an organization called the American Freedom Defense Initiative, she took in $960,000 in donations in 2013, paying herself a salary of $192,500, according to tax filings.

Donations pour in from the PayPal button on her website, Geller said, adding that she has “no idea” how much money she has raised.

Records do not list donors, but a recent report by the Center for American Progress, a think tank in Washington, said Geller’s top donors included the Fairbrook Foundation, which supports a number of mainstream conservative groups.

In 2010, Geller famously led a campaign to prevent the opening of an Islamic community center blocks from the World Trade Center site, calling it the “ground zero mosque.” She has filed numerous lawsuits across the U.S. in recent years, many of them related to her attempts to display incendiary ads in public transit systems. Most recently, New York City’s transit authority banned all political advertising after a judge upheld Geller’s right to run bus ads about Islam that said, “Killing Jews is worship that draws us close to Allah.”

Any depiction of the Prophet Muhammad is offensive to some Muslims. At the cartoon contest in Texas, about 30 illustrations of the prophet were propped up on easels. One depicted a pencil shoved through Muhammad’s body. Another showed Muhammad wearing a turban that doubled as a bomb, with a lit fuse protruding from the top.

Geller was hailed by many event attendees, some of whom took books for her to sign and posed for selfies with her.

Barbara Parlett works in Irving, a Dallas suburb with a significant Muslim population and the site of ongoing heated debates about a local religious tribunal established by three Muslims.

“(How did) Islam come into my city and is trying to take it over? I felt like I just woke up or something,” Parlett said. “So ever since then, I’m trying to stand up for Christians, for America.”

Geller was raised in a Jewish household on Long Island and champions Israel as a “beacon of freedom in a very oppressed and violent region,” but she said she is not motivated by religious fervor.

Sept. 11, Geller said, “threatened my freedom. It threatened the air that I breathe. This is nothing short of a battle between freedom and slavery.”