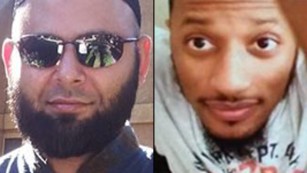 Nadir Soofi, left, and Elton Simpson were the two gunmen in the Garland, Texas, shooting.
Share:
ISIS has claimed responsibility for the attack outside a Prophet Mohammed cartoon contest in Texas — and warned of more attacks to come.

In a broadcast on its official radio channel Tuesday, the group said two Al Khilafa soldiers opened fire outside the event in Garland, a Dallas suburb. Al Khilafa is how ISIS refers to its soldiers.

The gunmen, Elton Simpson and Nadir Soofi, wounded a security guard before police shot and killed them.

The ISIS radio announcer also referred to Simpson and Soofi as the terror group’s “brothers.” The announcement ended with this warning:

“We say to the defenders of the cross, the U.S., that future attacks are going to be harsher and worse. The Islamic State soldiers will inflict harm on you with the grace of God. The future is just around the corner.”

While ISIS claimed responsibility two days after the attack, there was no immediate indication that the terror group in Iraq and Syria had contact with Simpson or Soofi, who both lived in Phoenix.

Former FBI agent Tim Clemente said the gunmen may have plotted the attack without direction from ISIS.

“They may not have had formal contact (with ISIS). They may have had email communication or read communications from ISIS, but I don’t think they were directed by ISIS,” Clemente told CNN’s “The Lead With Jake Tapper.”

“I think it’s the other way around — they were kind of applying for membership into ISIS. And so they were doing this act, sent out the tweet in advance because if they know there’s a possibility they’re not going to make it out of this, then they can’t give recognition to what they were trying to do after the fact.”

U.S. authorities have said they are investigating whether Sunday’s shooting had any link to international terrorism.

But there are clues that one of the gunmen was an ISIS sympathizer.

Moments before the attack, Simpson posted an ominous tweet with the hashtag #texasattack: “May Allah accept us as mujahideen.”

The tweet also said he and his fellow attacker had pledged allegiance to “Amirul Mu’mineen,” which means “the leader of the faithful.” CNN terrorism analyst Paul Cruickshank said that likely refers to ISIS leader Abu Bakr al-Baghdadi.

After the shooting, the propagandist tweeted: “Allahu Akbar!!!! 2 of our brothers just opened fire.”

In 2011, Simpson was convicted of making a false statement involving international and domestic terrorism. Prosecutors said he told FBI agents he had not discussed traveling to Somalia to engage in “violent jihad” — when, in fact, he had, according to an indictment.

Soofi, on the other hand, was relatively unknown to federal investigators, a law enforcement official told CNN.

Simpson and Soofi drove to Garland equipped with body armor and assault rifles.

Inside the city’s Curtis Culwell Center, the American Freedom Defense Initiative was hosting a cartoon contest featuring depictions of the Prophet Mohammed — which many Muslims consider sacrilege.

The two assailants drove up to the center and started shooting, striking a security guard in the ankle. But Garland police returned fire, killing the gunmen before they were able to enter the building.

Police “faced death head-on and, with incredible skill and bravery, were able to save a lot of people,” said Zach Horn, an attorney for the officers.

The shooting stirred memories of other attacks this year in France and Denmark.

In January, gunmen attacked the offices of Charlie Hebdo, a French satirical magazine that has a controversial history of depicting Mohammed, and killed 12 people.

In February, a gunman attacked a free speech forum in Copenhagen, Denmark, featuring artist Lars Vilks, who infuriated al Qaeda with his depictions of Mohammed.