Amensty: Bashar has turned Aleppo into circle of hell

by yalibnan
1608
Share:
Bashar al-Assad’s Syrian forces – and their use of barrel bombs – have turned war-ravaged city into “circle of hell”, citizens tell Amnesty International

Forces loyal to Syrian president Bashar al-Assad are committing war crimes and crimes against humanity on a daily basis in the war-ravaged city of Aleppo, according to Amnesty International.

The extent of city’s destruction was detailed in a report released by the group on Tuesday.

Amnesty said the relentless scourge of bombs and mortars has forced many civilians to eke out a desperate existence underground.

“We are always nervous, always worried, always looking to the sky,” a teacher from Aleppo told Amnesty International. Another resident described the city as ‘the circle of hell’.

The barrel bombs of Bashar al-Assad’s regime have killed more than 3,000 civilians in Aleppo since January 2014. Dropped from helicopters, the devices are packed with explosives and metal fragments intended to cause maximum damage.

They are so imprecise that the Syrian government usually drops them away from the front-lines in an attempt to avoid its own forces.

“I saw children without heads, body parts everywhere. It was how I imagine hell to be,” a local factory worker told Amnesty, describing the aftermath of an attack last year.

At least 10 people were killed on Sunday when a barrel bomb hit a nursery school and a community centre where students were sitting exams. Mr Assad denies his regime has used barrel bombs.

Aleppo has been divided between government – and rebel-held areas since fighting erupted there in 2012. Once a bustling urban centre, stretches of the city now resemble a ghostly wasteland.

Civilians struggle to obtain the most basic supplies including food, medicine, water and electricity.

Fearing death from above, many hospitals and schools now operate underground. On Monday, Doctors Without Borders said one of Aleppo’s main health facilities had been forced to close after being bombed at least twice in a week.

One former prisoner described how their nights were filled with a chorus of screams as guards tortured female and then male detainees. 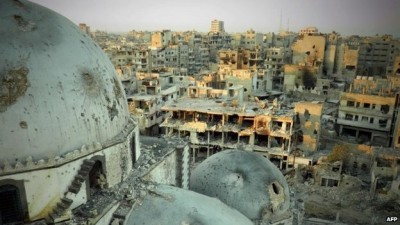 “Our conclusions are clear and incontrovertible: civilians in Aleppo are suffering unthinkable atrocities,” Amnesty concluded in the report.

Mr Luther said the international community had turned its back on Aleppo in a “cold-hearted display of indifference”.

“Continued inaction is being interpreted by perpetrators of war crimes and crimes against humanity as a sign they can continue to hold the civilians of Aleppo hostage without fear of any retribution,” he said.