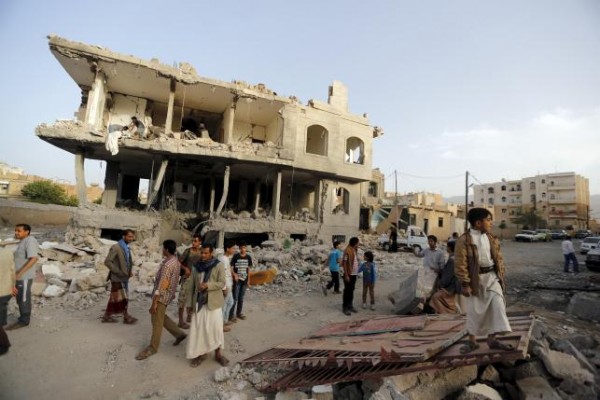 People stand at the site of an air strike in Sanaa April 26, 2015. REUTERS/Khaled Abdullah
Share:
Hospitals bereft of electricity, homes crushed by air strikes, thousands on the move in search of water, shelter and food: Yemen’s humanitarian plight, long fragile, has become disastrous after a month of all-out war.

In a reversal of a journey long undertaken by those fleeing disaster, war and famine, some Yemenis have resorted to escaping to less unstable zones in the Horn of Africa.

Hospitals in the capital Sanaa, too short of gasoline to run ambulances, blared appeals to private drivers with enough fuel to collect the dead and injured lying in the street after a big air strike on capital Sanaa last week.

The bombing of a missile depot set off an explosion which shredded dozens of homes and sent a mushroom cloud towering over the city.

Crammed with wounded people, some hospitals lacked the electricity or generator fuel to perform surgery, and aid officials say some bodies are now being stored in commercial refrigerators or hastily buried when fetid morgues lack power.

“It’s a catastrophe, a humanitarian catastrophe. It was difficult enough before, but now there are just no words for how bad it’s gotten,” she added.

Hundreds of Saudi-led air strikes and dozens of ground battles across Yemen have left millions in the impoverished country hungry and 150,000 fleeing for their lives.

At least 1,080 people have been killed, according to the United Nations, their bodies often crushed under bombed homes or left to fester in war zones. More than 4,000 have been wounded.

An Arab alliance’s month-long campaign against Iran-allied Shiite Houthi rebels has yet to loosen their grip over the capital Sanaa or beat back their gains in fronts across hundreds of miles in Yemen’s south.

Behind the struggle for the country’s future, average Yemenis bear the brunt of fighting. The United Nations say 12 million people are “food insecure” or going hungry, a 13 percent increase since the conflict started.

A blockade has choked off imports of food and medicines, while combat has interrupted fuel supplies to the country’s 25 million people.

The shortages have warped daily life and crippled hospitals.

Hisham Abdul Wahab, a resident of the district lashed by last week’s blast, said he tried but failed to stay on.

“Some people began returning to the neighborhood, but the strikes began again and now they’re leaving a second time. The place is devastated: there are no roads, no water and no electricity. Nobody’s left but thieves,” he said.

The tank and machine gun fire became too much for Samad Hussein Shihab and his family last week. He, his young children and elderly mother left their homes in the town of Houta and trekked by foot over sandy wastes to a village an hour away.

“It was the only way to protect my family. Houta is a total disaster area, with almost no civilians remaining. 3,000 families have left and they are suffering badly,” he said.

While he has now reached the relative safety of Aden and was taken in by kin, the city is itself shaken by clashes between Houthi militiamen and armed locals.

Snipers’ bullets and Katyusha rockets have rendered roads into town virtually impassable, preventing aid supplies getting in and desperate citizens from getting out.

Residents say dozens from the city have taken to rickety fishing boats seeking refuge in Somaliland and Djibouti, lands even poorer than Yemen but now more peaceful.

For those who remain, hope, along with basic staples of life, are in short supply.

“Displaced people are camped out in abandoned school grounds and people in the city are sitting through the shelling with no food and no electricity,” said local aid worker Wissam al-Hiswa.

“We are more desperate than a person sitting on a red-hot coal to get food into this city, but over the last week only 22 tons have gotten in, and we have nothing to provide,” he added.

Saudi Arabia announced last week that it would scale back its strikes and step up aid efforts, in a pause that was demanded by rights and aid groups.

The kingdom pledged $274 million to fully cover a U.N. humanitarian aid appeal for Yemen this month and has allowed aid agencies to ship hundreds of tons of medicine.

But air strikes hit a displaced persons camp, killing at least 40, and a humanitarian warehouse for aid agency Oxfam.

For many tens of thousands of people fleeing remote conflict zones, like Bakeel Saleh from the city of Dalea tucked among mountains in Yemen’s south, peace and relief look distant.

“There are no supplies or aid organizations around to help the thousands who fled the city into surrounding villages,” Saleh said.

“The main hospital and most people’s homes have been hit by the shelling. Our house was among them – it’s destroyed.” he added.