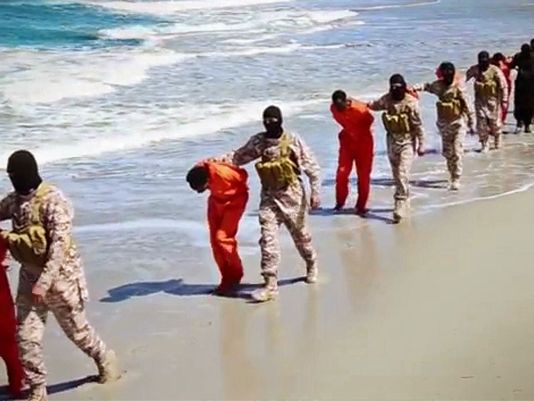 A video claiming to show the killing of Ethiopian Christians by Islamic State-affiliated militants in Libya has been released online.

The 29-minute video appears to show militants holding two groups of captives, one by an affiliate in eastern Libya known as Barka Province and the other by the Fazzan Province, an affiliate in the south.

In January, militants loyal to the Islamic State group, also known as ISIS and ISIL, claimed responsibility for an attack on the Corinthia hotel in the Libyan capital of Tripoli that left 10 people including an American and four other foreigners dead.

Extremist groups, including some that have pledged allegiance to ISIL, have risen in the country since the overthrow of dictator Moammar Gadhafi in 2011.

In February, Egypt began airstrikes against ISIL targets in Libya hours after militants released a video purporting to show the mass beheading of Egyptian Christian hostages.

ISIL controls vast swaths of Syria and neighboring Iraq. The extremists were recently driven out of Saddam Hussein’s hometown of Tikrit by Iraqi forces and allied Shiite militias, helped by U.S.-led coalition airstrikes.

The battle for Tikrit was seen as a key step toward driving the militants out of Mosul, Iraq’s second-largest city.