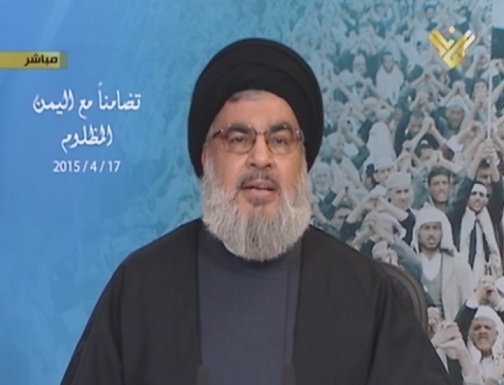 The leader of Lebanon’s  Iranian backed Shiite militant Hezbollah group has launched his harshest criticism yet of Saudi Arabia, accusing the kingdom of spreading   extremist ideology in the Muslim world and the killing of civilians in Yemen.

Hassan Nasrallah  said via video link  during his address to  hundreds of supporters Friday at a Beirut rally in support of Yemen’s  Iranian backed Shiite  Houthi rebels that Saudi-led airstrikes targeting them have not led to victory.

Since March 26, the Saudi-led coalition has been pounding the rebels  and allied fighters loyal to Yemen’s ousted President Ali Abdullah Saleh.

Nasrallah says that the kingdom will soon realize that “the only choice left” is a ground operation in Yemen — a “ground invasion will be costly and will end with a defeat.”

He  called for avoiding a dispute in Lebanon over the Yemeni crisis.

“Intimidation or threats will not prevent us from continuing to declare our condemnation of the aggression against Yemen,” said Nasrallah

“The war’s real objective is restoring the Saudi-American hegemony over Yemen, as I have already announced,” he reiterated.

“The officials in Saudi Arabia said the war’s objective is to defend Yemen’s Arab identity, but have the Arab people authorized them to wage a war on Yemen? This is a war against an Arab people,” Nasrallah lamented.

Noting that there is an “attempt to give the war a sectarian overtone,” Hezbollah’s chief pointed out that “no one accepts to label the events in Yemen as a Shiite-Sunni war other than those who are controlled by money.”