Obama made a deal with the devil, Speaker Boehner asserts 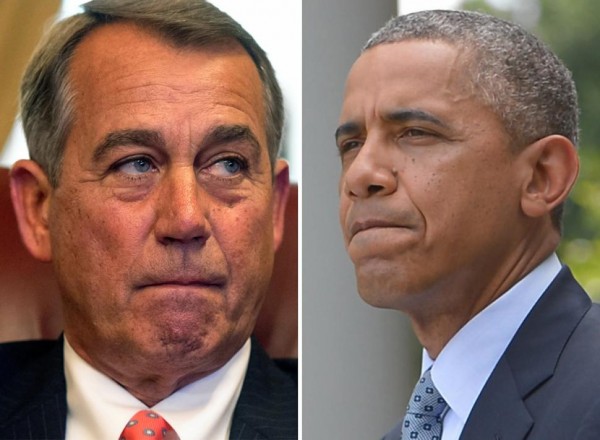 By Josh Rogin
President Barack Obama made a “deal with the devil” in his nuclear framework with Iran and there’s no reason to think it can verifiably prevent the Tehran regime from getting a nuclear weapon, House Speaker John Boehner said Tuesday.

Returning from a long trip to the Middle East that included stops in Iraq, Israel, Jordan and Saudi Arabia, Boehner spoke to a small group of reporters about the war against the Islamic State and the general situation in the region as well as the Obama administration’s nuclear deal with Iran. He said there was great skepticism among Iran’s neighbors about the emerging agreement between it and the P5+1 world powers, and he shared those concerns.

“I don’t know how you cut a deal with the devil and think the devil is going to keep his end of the deal,” Boehner said of Obama and his advisers. “All they’ve done this far is talk about a delay of their development of a nuclear weapons for a few months or a year, in exchange for the rehabilitation of their entire economy? I think they are desperate for a deal at any cost and I think this is a prescription for disaster.”

Boehner also responded to White House spokesman Josh Earnest’s March 29 statement on ABC’s “This Week” that Boehner’s opposition to the nuclear negotiations meant he wanted war with Iran, and that he should “should have the courage of his convictions to actually say so.” On the contrary, Boehner said, he was not for war with Iran, and if the administration had kept up sanctions pressure it could have gotten “a real agreement” rather than the “unverifiable” pact the framework suggests. Pressed on what that meant, Boehner said: “An agreement that would allow unfettered access to the inspectors to go anywhere at any time. That would be a real agreement.”

Boehner warned that Arab Gulf nations are likely to pursue their own nuclear weapons programs if the deal with Iran doesn’t satisfy their deep skepticism. “If Iran is on a path to get a nuclear weapon, all those countries that can afford to get one are going to have one,” he said. “It’s a fact.”

As for the Islamic State, Boehner said that the U.S.-led international coalition is not making progress in degrading and destroying the terrorist group, despite some tactical successes such as the taking of Tikrit, Iraq. To turn the tide, the 4,500 U.S. military personnel in Iraq should be given more authority to perform missions on the ground beyond training and advising Iraqi forces, he said. “Nobody believes that what we are currently doing is going to accomplish the goals the president set out to accomplish,” said Boehner. “There’s more that we can do, with limited risk, and it wouldn’t require that many more people.”

Congressional action on an authorization for the use of military force against the Islamic State is stalled indefinitely because the Obama administration has refused to negotiate on its proposed text, which contains limits on the president’s war powers that Republicans say they can’t accept. “Until the president gets serious about fighting the fight, until he has a strategy that makes sense, there’s no reason for us to give him less authority than what he has today, which is what he’s asking for,” Boehner said. “As much as I think Congress ought to speak out on this issue, it’s going to be virtually impossible to do that.”

Despite his many criticisms, Boehner insisted he was still open to working with the administration on foreign policy, and that it’s not Congress’s job to solve international problems. “When it comes to foreign policy, my first preference is to be as supportive of the president, whoever the president is,”he said. “I just think it’s the wisest thing to do.”