Obama warns Iran its fighters in Iraq must answer to Baghdad 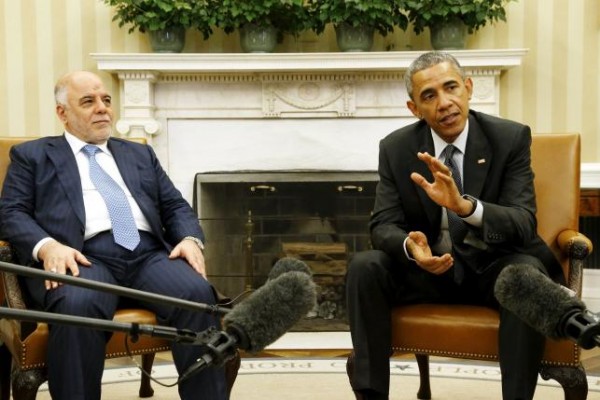 U.S. President Barack Obama (R) answers a reporter’s question after a bilateral meeting with Iraq’s Prime Minister Haider al-Abadi (L) in the Oval Office at the White House in Washington April 14, 2015. REUTERS/Jonathan Ernst
Share:
U.S. President Barack Obama warned Iran on Tuesday that its fighters must respect Iraq’s sovereignty and answer to the government in Baghdad in the battle against Islamic State militants.

Iran-backed Shi’ite militias have played a major and growing role in battling the Sunni Islamic State, an al Qaeda offshoot also known as ISIL, that emerged from the chaos inIraq and neighboring Syria and which swept through northern Iraq last June.

Iraqi Prime Minister Haidar al-Abadi has had to rely on Shi’ite militias, some of which are backed by Iran and advised by Iranian military officers, as Iraq’s regular military deserted en masse last summer in the face of the Islamic State onslaught.

Obama said he and Abadi discussed the issue at length in their Oval Office meeting on Tuesday.

Asked about Iranian involvement in Iraq, Obama said that he expected the neighbors to have an “important relationship,” and recognized that the mobilization of Shi’ite militias had been necessary to counter ISIL’s advance last year.

But he added that any foreign-backed groups in Iraq should now be under Abadi’s control.

“Once Prime Minister Abadi took power … from that point on, any foreign assistance that is helping to defeat ISIL has to go through the Iraqi government. That’s how you respect Iraqi sovereignty,” Obama said.

Abadi is on his first trip to Washington since becoming prime minister last September. His meeting with Obama is meant to convey a U.S. stamp of approval for a leader who has sought to be more inclusive than his predecessor in governing Iraq.

Abadi said that Iraq would respect other countries’ sovereignty and expected the same. He also said he was eager to bring all of the fighters in Iraq under state control.

“I am aware that regional countries have their own interests and I respect these interests, but I also welcome any assistance that they would provide, and I would like to thank them,” Abadi said through a translator.

“However, we do not accept any intervention in Iraq or any transgression on Iraqi sovereignty. This is a war that is fought with Iraqi blood with help from the coalition forces and regional countries.”

Abadi had been expected to seek billions of dollars in drones and other U.S. weapons during his visit. White House spokesman Josh Earnest said Abadi did not make a specific request for additional military support during the meeting.

Obama announced $200 million in additional U.S. humanitarian aid to Iraq, but declined to say whether Washington would provide Apache helicopters, drones and other arms to Baghdad.

The Obama administration, which welcomed Abadi’s ascension after a tricky relationship with former Prime Minister Nuri al-Maliki, may not agree to provide significant additional support.

Obama, who was elected on the back of a promise to end the war in Iraq, is limited by public aversion to U.S. entanglement in another regional conflict and congressional constraints on his budget authority.

In August, Obama authorized the first U.S. air strikes on Iraq since the 2011 withdrawal of American troops. He has also deployed about 3,000 American military forces to train and advise Iraqi and Kurdish forces to fight Islamic State.