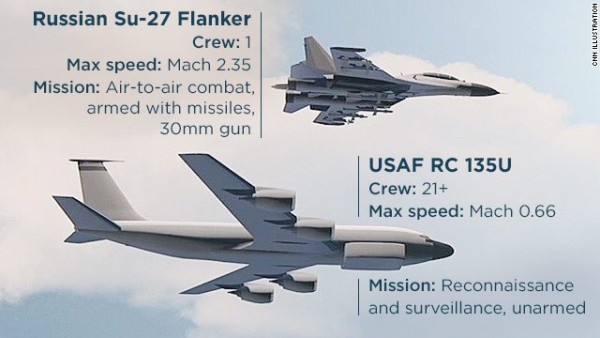 The United States said on Monday it has expressed its concerns to Moscow over a Russian fighter jet’s “sloppy” and unsafe intercept of a U.S. spy plane in international airspace, in the latest sign of tensions between the two countries.

The incident took place on April 7 over the Baltic Sea, when a Russian SU-27 Flanker intercepted a U.S. RC-135U reconnaissance plane and performed what the Pentagon described as unsafe aerial maneuvers.

Relations between the West and Russia have soured as a result of Moscow’s role in the conflict in Ukraine and its annexation of Crimea, while increased Russian military activity in the Baltics has added to tensions.

“The unsafe and unprofessional actions of a single pilot have the potential to unnecessarily escalate tensions between countries,” said Pentagon spokeswoman Eileen Lainez.

In late March, Swedish fighters intercepted four Russian planes flying in international air space over the Baltic sea with their transponders turned off.

The State Department said the matter was being raised “in the appropriate official and diplomatic channels.”