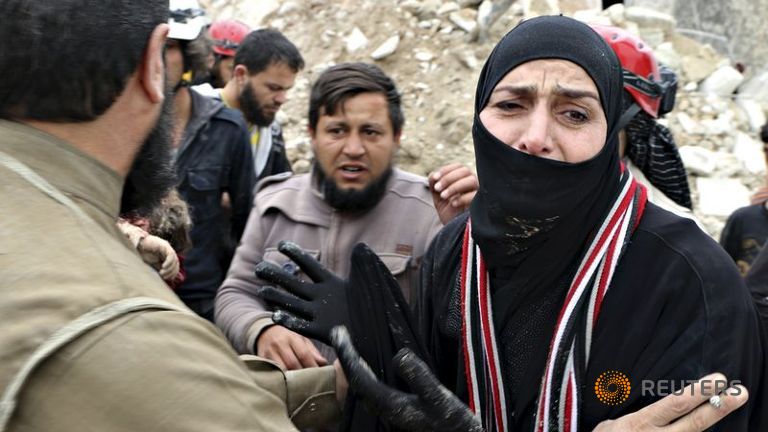 A group monitoring the Syrian war said at least nine people including five children were killed in a Syrian army air strike on a school in a rebel-held area of the country’s second city Aleppo on Sunday, though the army denied the report.

A Syrian army source told Reuters the army had stepped up attacks on rebels since the insurgents bombarded a government-held residential area in the northwestern city on Saturday. But he said the military was not targeting civilians.

Aleppo is a major frontline in the four-year-old Syrian civil war, a conflict which the United Nations says has killed around 220,000 people. The city, about 50 km (30 miles) from the Turkish border, is divided between government and insurgent control.

The UK-based Syrian Observatory for Human Rights, which tracks the war using a network of sources on the ground, said the death toll from the strike on Jamil al Qabani school would likely rise.

The Observatory said at least 32 people were killed in Aleppo on Saturday, 17 of them in the government-held district of Suleimaniyah bombarded by rebels, and 15 of them in an army air strike that later hit a market in a rebel-held area.

The military source said the weaponry used in Saturday’s rebel bombardment had “a very great destructive capacity”. Army specialists were investigating, he said. “It might be the first time it was used.”

“The army is targeting militants in Aleppo because … yesterday (Saturday) they committed a major crime against civilians in Suleimaniyah,” the source added.

He did not comment on the reports of the market attack.

The Syrian National Coalition, a Turkey-based political opposition alliance, said the air strike on the market in the Maadi district of Aleppo on Saturday was a new massacre of civilians by President Bashar al-Assad.

The attack on Suleimaniyah led the Syrian mufti to call on civilians to evacuate rebel-held areas from which shells were being fired so they could be completely destroyed.