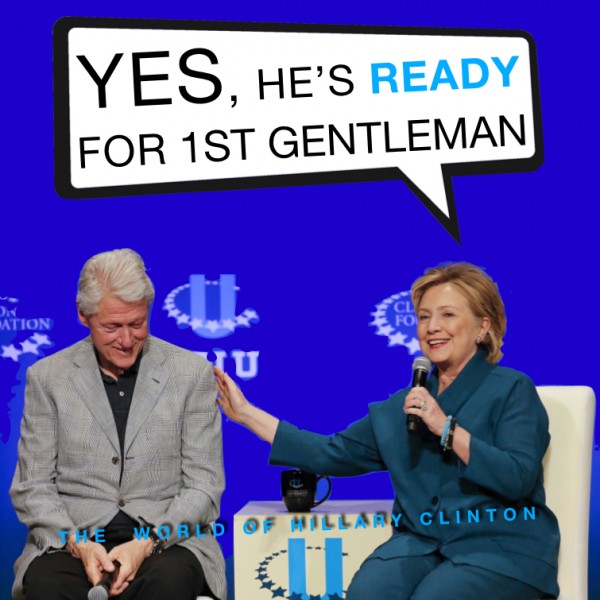 Don’t expect Bill Clinton to be the campaigner in chief for Hillary Clinton as she launches her second presidential bid — at least not initially.

The former president, perhaps the most gregarious and naturally gifted politician of his generation, is viewed as a critical asset for Clinton, as she embarks on a campaign that is widely expected to be different from the race she ran against Barack Obama in the 2008 Democratic primary.

“I think it’s important, and Hillary does too, that she go out there as if she’s never run for anything before and establish her connection with the voters,” Bill Clinton told Town and Country magazine in a story published Tuesday. “And that my role should primarily be as a backstage adviser to her until we get much, much closer to the election.”

Chris Lehane, a Democratic consultant who worked in the Clinton White House, said Bill Clinton is a weapon that shouldn’t go unfired for too long.

“If you’re manager of a baseball team and you have Willie Mays on the bench, you put him in the game,” Lehane said.

Hillary Clinton will announce her long-awaited candidacy Sunday, according to the Associated Press and numerous news reports. Republicans are eager to make the former secretary of State an issue — whether it’s for her use of a private email account while serving as the nation’s top diplomat or her response to the deadly 2012 attack on the U.S. consulate in Benghazi, Libya.

Since he left office in January 2001, Bill Clinton has been the favorite surrogate of Democratic candidates across the country. He traveled to nearly half the states during the 2014 election season, headlined dozens of rallies and fundraisers, recorded robo-calls, cut videos and more in what turned out to be a disappointing year for Democrats at the polls.

The former president is still hugely popular: An NBC/Wall Street Journal poll taken in March showed 56% of adults have a somewhat positive or very positive view of him, while 26% say they have a somewhat negative or very negative view. Clinton’s ratings are higher than those of Obama (44%-43%) and George W. Bush (35%-39%).

He is also more popular than Hillary Clinton, with 44% of Americans in the NBC/Wall Street Journal poll saying they had a positive view of her compared with 36% who have a negative one.

Bill Clinton’s skill at translating big ideas and complicated issues, such as the Affordable Care Act, into concepts that resonate with voters prompted President Obama to dispatch him across the country with great effect during his 2012 re-election campaign.

Clinton “is probably the most important political surrogate in the country of any party,” said Bill Burton, a Democratic strategist and former Obama aide in the 2008 campaign and White House. “He can draw a lot of attention and he can excite activists. He can frame arguments in a way that no one else can, which is why President Obama made him the Secretary of Explaining Stuff.”

During Hillary Clinton’s 2008 campaign, her husband frequently introduced her at rallies, dialed for dollars and whipped up enthusiastic crowds at his own events on her behalf. But there were missteps that she would like to avoid in 2016.

Hillary Clinton apologized to African Americans for comments her husband made during the 2008 South Carolina primary comparing Obama’s victory there to Jesse Jackson’s 1984 and 1988 victories in the state. Bill Clinton had also called Obama’s opposition to the Iraq War “the biggest fairy tale I’ve ever seen.”

“I want to put that in context. You know I am sorry if anyone was offended. It was certainly not meant in any way to be offensive,” Hillary Clinton told the publishers of black community newspapers in March 2008. “We can be proud of both Jesse Jackson and Senator Obama.”

Don Fowler, a former Democratic National Committee chairman close to both Clintons, said the news media treated the former president unfairly during the 2008 incident in South Carolina. But he concedes Bill Clinton has to be careful in the 2016 campaign.

“I don’t think his role should be up front and out in public,” Fowler said. “I don’t think it would be appropriate for them to share the stage … He’ll be close to planning and coaching but I don’t think this will be a shared campaign.”

Clinton, for his part, sounded humble in the Town and Country story focused on his family foundation’s efforts in Haiti about whether he still has the fire in the belly to be an effective campaigner. The former president, now 68, suggested he’s mellowed since daughter Chelsea gave birth to baby Charlotte last year.

“I’ve told Hillary that I don’t think I’m good (at campaigning) anymore, because I’m not mad at anybody,” he said. “I’m a grandfather, and I got to see my granddaughter last night, and I can’t be mad.”