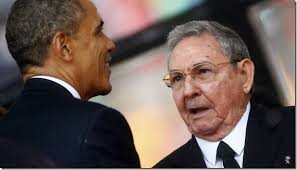 BY CARMEN SESIN
As U.S. President Barack Obama and Cuban President Raul Castro prepare for their first in-person discussion after their historic handshake Friday night at the Summit of the Americas in Panama, there are mixed feelings in the heart of the Cuban community in Miami. A recent poll by MSNBC/Telemundo/Marist found 59 percent of Americans, including 56 percent of Latinos approve of diplomatic ties between the U.S. and Cuba. But for those with very personal or dramatic connections to the island, the idea of both presidents formally meeting and shaking hands brings back a sense of bitterness they hadn’t felt in a while.

Maria Elena Sanabria, a Miami school teacher, fled Cuba for Spain and ultimately the U.S. in 1980, due to lack of freedom in the island. While working as a graphic designer in Cuba, she felt enormous pressure to join the Young Communist League, which she refused to do. She says this gave her anxiety and stress, which led to her quitting her job. As the economic situation became more dire and products more scarce her family decided to leave the country.

Sanabria thinks the meeting between Obama and Castro is a bad idea and conditions in the country won’t change until the Castro brothers are gone.

“This is not going to help the Cuban people… People have their eyes fixed on the meeting but it won’t change anything,” she said.

Janet Ray Weininger, an American who says she feels Cuban at heart (more “guajira,” a Cuban term, than American, she says) is also adamantly against Obama and Castro coming together. She was only six years old when her father, an army soldier, was killed during the Bay of Pigs invasion in 1962. After helping train a group of Cuban exiles, known as Brigade 2506, to fly into Cuba in hopes of overthrowing the communist regime, Thomas “Pete” Ray decided to volunteer when the situation wasn’t looking favorable for the U.S. When her father’s plane was brought down he was still alive but wounded. He was captured and taken to a medical facility where he was executed at point blank range in his right temple.

“I remember crying hysterically after I saw the picture of my dad,” Weininger said.

She says the U.S. government was not forthcoming about how her father died and she learned the details after years of investigating. It wasn’t until 1979 that Weininger was able to recover her father’s remains from a Havana morgue where he had been kept for 18 years.

“I think it was his [Castro’s] trophy and his symbol of hate against the U.S.,” she said.

Weininger doesn’t see anything positive in the meeting between Obama and Castro. She says Obama is taking these steps for his own personal legacy, which does nothing for the freedom of Cuba.

“I feel Obama is doing this because he wants to build a legacy and he’s doing this on the blood of the people who have made a sacrifice,” Weininger said.

Obama and Castro briefly met on Friday night and shook hands at a dinner for Latin American leaders convening in Panama City. This was a historic moment for the two nations who haven’t been on speaking terms for over 5 decades. The last time they spoke was in a December phone call before they both announced their intent to restore diplomatic relations between their countries, which shocked many around the world.

Eladio Jose Armesto is an attorney in Miami who was born in Cuba. His family settled in the U.S. when he was 4 years old because the family feared his father would be imprisoned for “counter-revolutionary activity.” Armesto thinks the meeting is a positive step forward.

The meeting between Obama and Castro “should not be seen as an endorsement of the Castro regime or as ignoring the regime’s terrible violation of human rights,” says Armesto.

He says U.S. sanctions don’t work, isolating the Cuban people only strengthens the regime, and empowering Cubans with ideas and information is the only way they will mobilize against the government.

Pedro Gonzalez Munné, an author of books who lives in Miami, applauds the meeting between Obama and Castro and says it’s “dumb” for people to oppose it. Munné says he exiled in Miami in 1991 after he was fired from his job as news editor at Cuban television channel “Teve Rebelde” for “fighting for journalist rights in the television system.”

According to Munné the thaw in relations is “a change of strategy, not of policy.”

He says Obama is trying to leave a legacy and making a change with Cuba is very important to him.The biggest enemy of the military government and the Castro dynasty is the Cuban immigrants in the U.S.,” Munné said.

Aside from the meeting between Obama and Castro, U.S. Secretary of State John Kerry and his Cuban counterpart Bruno Rodriguez held closed-door discussions after arriving in Panama, which the State Department described as lengthy and productive. The burst in diplomacy between the two nations is likely to reinvigorate talks between the U.S. and Cuba to re-start their relationship after five decades of hostility.
NBC