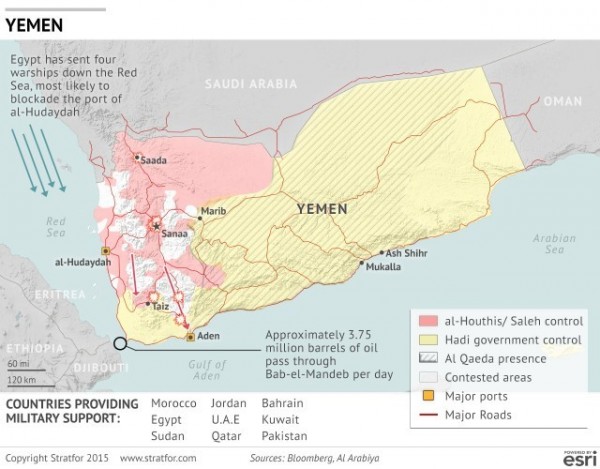 International shipping lines are being forced to scale back or suspend port calls to Yemen as the conflict gets worse, putting pressure on supplies of food as prices rise in local markets.

Yemen imports more than 90 percent of its food, including most of its wheat and all its rice, to feed a population of 25 million. Much of its needs had been serviced by foreign ships.

Saudi Arabia and Arab allies have launched air strikes against the Iran-allied Houthi movement, which has taken most of the country and forced President Abd-Rabbu Mansour Hadi to flee to Riyadh.

The coalition has deployed naval vessels to intercept ships carrying arms to the rebels, although merchant ships are meant to have free passage.

Most ports appear to be under Houthi control or are disputed by combatants. Many shipping companies are now unwilling to risk their vessels, industry sources say.

“Many of the owners and container lines are refusing to go to Yemen. You can still call at a number of ports but the fear factor is growing,” an international commodities trade source involved in Yemen said.

The world’s largest global shipping association, BIMCO, said: “If a port is taken/held by the Houthis and a ship is seen to be supplying the rebels, the ship could be at risk from air strikes or indeed naval action from the coalition.”

Another commodities trader said his vessel carrying wheat was held up for days by coalition ships before being allowed through into Yemen. The impact is being felt by local people in the Arab world’s poorest country.

“The price of a 50 kg bag of wheat has risen from 5,000 Yemen rials ($23) to 6,300 rials,” said Muhammad Saad, 37, from the capital Sanaa, which is under Houthi control. “People are buying wheat in big quantities because they fear shortages.”

Fahd al-Dhabhani, a government employee from Sanaa added: “We are living a disaster from all sides. The price of wheat and flour have risen in a big way. There is no more petrol even on the black market.”

The world’s top container group, Maersk Line, said it had suspended all calls to Yemen.

The world’s number 2 ship container line, MSC, said it had taken the decision to divert vessels bound for Yemen “to alternative, and more secure, ports in the region.”

The world’s third biggest container group, CMA CGM said separately it was not making direct port calls to Yemen, only booking slots on other vessels that still called at the port of Hodaida.

Others such as Taiwan’s Evergreen Line had also suspended shipping services “to prevent risk to the Line’s vessels and its customers’ cargoes”.

The processing and distribution of wheat and other staples have already been disrupted. Aid agencies have warned that Aden faces a humanitarian catastrophe.

“The port of Aden is virtually closed, but for some oil shipments which berthed at Aden Refinery. Dry cargo shipments have been stopped because no stevedores are available due to armed clashes,” shipping and logistics agency GAC said.

GAC said other ports such as Saleef, and Hodaida on the Red Sea remained open.

Nevertheless, an explosion at a dairy factory at Hodaida was adding to the risks. In another blow, Al Qaeda in the Arabian Peninsula captured the eastern port of Mukalla last week.

Container group United Arab Shipping Company said it had suspended all cargo bookings. Precious Shipping, one of Thailand’s largest dry cargo ship owner, said it would not allow any of its fleet into Yemeni waters.

At least four oil and natural gas tankers that were headed to Yemen have been diverted due to the chaos.

So far, there have not been any major disruptions to the Bab el-Mandeb waterway off Yemen through which nearly 4 million barrels of oil are shipped daily to Europe, the United States and Asia.

“Iran’s warships are not likely going to initiate any hostilities, but could serve to run interference with warships of other navies that might attempt to prevent Houthi rebels onshore from resupplying,” said Michael Frodl, of U.S. based consultancy C-Level Global Risks.