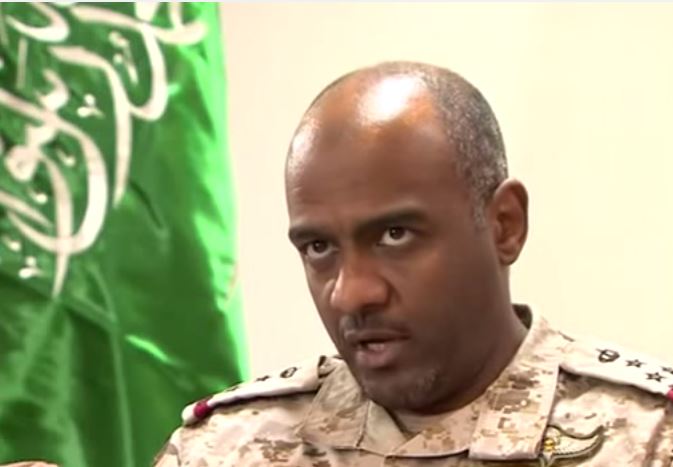 Iranian ships have the right to be present in international waters, but won’t be allowed to enter Yemeni territorial waters.

Saudi Arabian Brig. Gen. Ahmad Al-Assiri, consultant in the defense minister’s office, made those remarks in a reference to Iran’s decision to send two warships to the Gulf of Aden.

Iran said the warships were sent there to protect Iranian shipping.

During his daily military briefing on Operation Decisive Storm, Al-Assiri said the coalition reserved the right to respond to any attempt by Iran to arm Houthis.

According to Al-Assiri, there are confirmed reports that a large number of Houthis and pro-Saleh soldiers are surrendering to the Popular Committees.

He said those who are surrendering should be dealt with according to the international law and they shouldn’t be harmed.

Al-Assiri said Iran has not evacuated any of its citizens from Yemen because they are involved in “training and arming” the Houthis.

He added: “A lot of countries have requested evacuation for their citizens and successfully moved them out of Yemen. Those Iranians planning to remain in the country would face the same fate as the Houthis and their supporters.”

He said local tribes have joined Yemeni soldiers to fight against the rebels. Many more would do so “within hours,” he said.

Al-Assiri said air raids have been precise. The coalition has in particular targeted Khalid Camp and Hamza Camp, which were used to store weapons for the rebels. “We are very careful since we do not want to harm innocent citizens close to our targeted areas,” he said.

He said the Yemeni Army has closed off its sea borders to prevent foreign countries from smuggling weapons to the Houthis. The airfields in Yemen are also under the control of the Yemeni Army.