Blinken: Hezbollah’s Syria role is helping ISIS, “bad for the people of Syria and Lebanon” 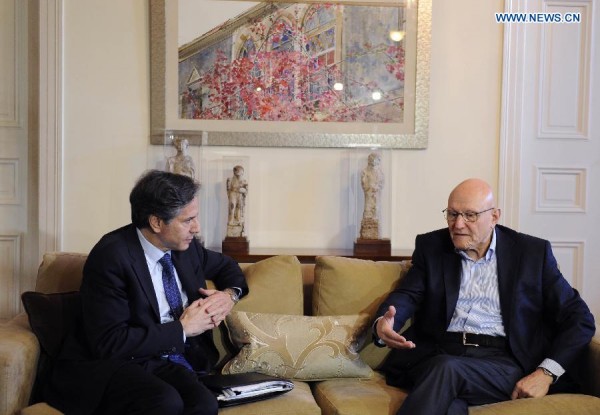 U.S. Deputy Secretary of State Antony Blinken  , who has been on an official in Lebanon since Sunday blasted on Tuesday  Hezbollah’s military intervention in Syria stressing that it only served to prolong the bloody conflict in the neighboring country and provided ISIS with a recruitment tool.

Speaking to reporters after holding talks with Prime Minister Tammam Salam at his residence in Moseitbeh, Blinken reiterated U.S. support for Lebanon in its ongoing battle against terrorism. He also stressed that Washington was committed to a political transition in Syria that would exclude “a brutal dictator” like President Bashar Assad.

“The United States is committed to helping bring about a political transition in Syria that leads to an inclusive government and a future of freedom, dignity and security for the Syrian people,” he said . “Dignity cannot be brought if the current dictator – a man who has gassed and barrel bombed the people of Syria – remains.

As Secretary of State John Kerry has emphasized, a brutal dictator like Assad has no place in Syria’s future.” He stessed.

“This departure should take place through a negotiated political settlement that is part of a comprehensive transition to a representative, accountable government being formed in Syria.” He said .

“In this regard, Hezbollah’s support for Assad – indeed the lifeline it provides – serves only to prolong the conflict and suffering, provides Daesh [Arabic acronym for ISIS] with a recruitment tool, and causes more refugees to flee to Lebanon. Hezbollah’s actions in Syria are bad for the people of Syria and Lebanon.”

Citing the threat posed to Lebanon’s security by Syria-based jihadis and the Syrian refugee crisis, which is straining the country’s feeble infrastructure, Blinken said that in order to tackle the many challenges confronting the region today, Lebanon needs every part of its government, particularly the presidency, functioning effectively.

He urged the rival Lebanese leaders to elect a president as soon as possible, saying MPs thwarting a quorum for a Parliament session to choose a new head of state should be held to public account.

“Lebanon cannot face these historic challenges with an empty chair. Electing a president will not solve all ills, but it will be a critical step in the right direction,” he said. “Until the seat is filled, Lebanon cannot make important policy decisions that would improve the lives of its people.”

Blinken told the feuding Lebanese parties not to count on foreign assistance to end the 10-month-old presidential vacuum.

“I urge Lebanon’s leaders not to look outside of their country for a resolution to the presidential gridlock, but instead to find a solution from within,” Blinken said.

“Responsible voices in the international community will support you. But unless and until a president is chosen, the erosion of Lebanon’s political institutions will only deepen.”

“The election of a president is a decision entirely for the Lebanese to take, but they must take it; and those blocking formation of a parliamentary quorum should be held to public account,” he added.

The Lebanese parliament failed Thursday and for the 21st time in a row to elect a president to replace Michel Suleiman whose six-year term ended on May 25th last year.

Blinken  revealed that the  US just pledged an additional $118 million for Lebanon, bringing the  total US  contribution to nearly $800 million to help with the crisis.”

Blinken vowed continued U.S. military assistance to help the Lebanese Army and security forces in the battle against terrorism.

“We continue to support the security services as they protect and preserve Lebanon’s security, stability, independence and sovereignty on behalf of all Lebanese,” he said. “Our security assistance – training, equipment, weapons and ammunition – totals more than $1 billion over the past nine years.”

In response to a question about  the U.S. negotiations over  Iran’s nuclear program  he said the negotiations did not deal with Lebanon or other regional issues. “So they should not affect the political calculus of Lebanese leaders or be used as a reason to delay [the] presidential election,” he said.

Lebanon Speaker Nabih Berri hailed the negotiations between Iran and world powers on its nuclear program as “the biggest political and diplomatic marathon in history,” hoping that Lebanon would benefit from them.

“The agreement is an important step and would help resolve crises in the region,” Berri told his visitors, according to al-Joumhouria newspaper published on Friday.

Blinken met yesterday with Berri and Foreign Minister Gebran Bassil, with whom he discussed the issues of terrorism, foreign fighters and ways to combat terror.

Discussions also focused on the Iranian nuclear file and the repercussions of the deal signed last week between world powers and Iran.

On Sunday Blinken held talks with Progressive Socialist Party leader MP Walid Jumblatt in the presence of US envoy.

The Jumblatt meeting was attended by several ministers representing the PSP in Prime Minister Tammam Salam’s cabinet, lawmakers from Jumblatt’s parliamentary bloc and former MP Ghattas Khoury, who is a former Future Movement MP and a senior advisor of former PM Saad Hariri.

The meeting between the visiting U.S. official and the Lebanese politicians was an occasion to discuss several international issues, including the nuclear deal, Hamadeh told Voice of Lebanon radio (100.5).

According to the US state department Blinken will travel April 7 to Riyadh, where he will meet with senior Saudi officials.

On April 8, he will then travel to Abu Dhabi and meet with senior UAE government officials to discuss a wide range of bilateral, regional, and global issues, including the ongoing work as part of the Global Coalition to Counter ISIL.

In Muscat, April 9, Blinken will meet senior Omani officials to discuss a broad range of bilateral, regional, and global issues.

Blinken’s final stop will be in Tunis on April 10 to meet with senior Tunisian Government officials and civil society representatives. His visit is reportedly intended to show US support for Tunisia’s democracy in the face of the recent Bardo Museum attack.”