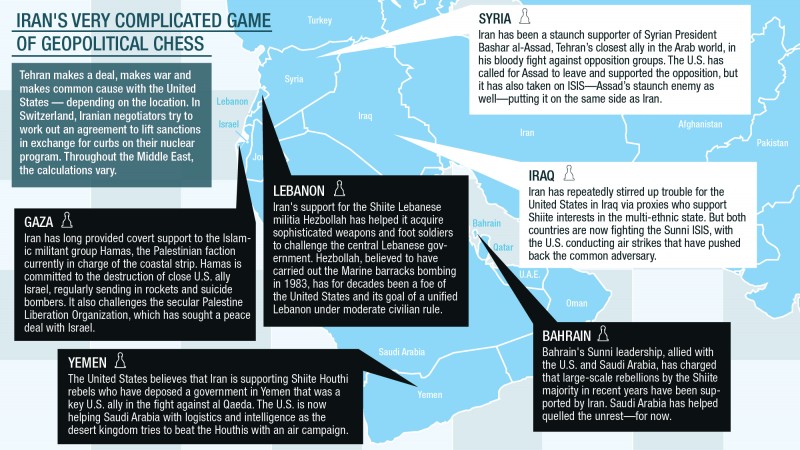 Deal or no deal in the Iranian nuclear talks, Tehran is already behaving like it’s made a killing.

But it’s not just Iran’s nuclear aspirations that have everyone’s attention — though just the fact that Iranian officials are at the table with the world’s most powerful countries has elevated Iran’s international status.

Getting the bomb would greatly magnify its regional — even global — role, but Tehran is also making big moves in a tumultuous Great Game of Middle East geopolitics that is challenging U.S influence and prestige and chilling Washington’s allies.

As it engages on its nuclear program, Tehran has exploited the divisions of the Arab Spring and the power vacuum of America’s downgraded involvement in the region. It has also taken advantage of the leeway the United States offered in prioritizing a nuclear deal over attempts to restrain Tehran’s proxies that could risk breaking up the negotiations.

The result is that Iran — often through militant groups it sponsors — has become a key player in conflicts in neighboring states all the way to the edge of the Mediterranean.

Its drive for regional pre-eminence is becoming an increasing problem for the Obama administration as it contemplates selling a nuclear deal — which is already drawing considerable skepticism — to opponents in Congress and to anxious allies like Saudi Arabia and Israel, who are watching Iran’s maneuvering up close.
Critics are accusing President Barack Obama of turning a blind eye toward Iran’s nefarious motives and proxy wars in the Middle East to safeguard a legacy-enhancing push for a deal that could lift his presidency’s historic potential after decades of hostility between Washington and Tehran.

They fear Iran is not only about to walk away with a deal that leaves its nuclear infrastructure intact, but that it is also playing the United States for a fool by using the talks to shield its hegemonic ambitions in the Middle East.

“They have completely schooled the American and European diplomats,” said Michael Rubin, an Iran analyst and critic of the administration at the American Enterprise Institute.

Iran has used its Revolutionary Guard Corps and a host of proxies to fill the power gap left by the U.S. departure from Iraq and the political tumult stirred by the collapse of authoritarian governments felled by now-defunct popular reform movements.

“Iran was destined to expand its influence one way or the other, and the U.S. was not going to prevent that, especially because of the cost involved in trying to pacify Iraq,” said Reva Bhalla, vice president of global analysis at Stratfor, a global intelligence and advisory firm.

“Iran benefited from the Arab Spring as well.”

Iran has also seen an opportunity in the U.S.’s shifting policies and interests in the region. The George W. Bush administration pushed out the regional strongman in Iraq, Saddam Hussein, who kept Iran in check through a hostile balance-of-power arrangement. The subsequent collapse of the Iraqi state left a festering sectarian stew that Tehran was quick to use to forge links in Shiite areas.

And Obama, in addition to withdrawing American forces from Iraq, has sought a lighter touch in hot spots like Syria, Yemen and Libya, where chaos has created an opening for outside fighters and radical domestic groups to swoop in.

The regional meltdown that has seen governance collapse and national borders redrawn on sectarian lines has provided a potent breeding ground for radical, stateless Islamic groups — like ISIS — to grow and threaten both U.S. and Iranian national interests.

So the Obama administration also sees a common interest with Iran in fighting ISIS. But some critics say its desire to do so has blinded it to Iran’s activities elsewhere.

This has left the White House in the uncomfortable position of having to explain why the United States appears to be tacitly cooperating with Iran, with which it has waged a de facto ideological war for 30 years.

Senior U.S. officials deny they are going soft on Iran to keep Tehran sweet on nuclear talks. They say the negotiations are walled off from concerns about Iran’s aggressive moves elsewhere. And they point out that Tehran would be much more dangerous to its neighbors if it were able to build a bomb.

“Even if a nuclear deal is reached, our concerns about Iran’s behavior in the region and around the world will endure,” White House Chief of Staff Denis McDonough told the J Street policy conference last week, slamming Iran as a state sponsor of terrorism, a proliferator and a gross violator of human rights that seeks to destabilize its neighbors.
Several U.S. allies in the region, watching Iran’s growing influence, worry that whatever berth the United States is giving Iran, it goes well beyond the nuclear talks and the fight against ISIS.

Instead, they fear the beginning of a wider détente with Iran that some are calling a “Persian pivot.”

Saudi Ambassador to the United States Adel al-Jubeir told CNN that Riyadh was “concerned about the interference by Iran in the affairs of other countries in the region, whether it is in Iraq, Syria, Lebanon, Yemen.”

“I heard repeatedly from leaders in the region that they believe we are forming some kind of Faustian bargain with the Iranians which would then lead to great danger to those countries,” Republican Sen. John McCain of Arizona said last week.

“They believe that we are siding with Iran.”

The former director of the Defense Intelligence Agency, retired Lt. Gen. Michael Flynn, warned on Fox News on Sunday that Iran was “on the march” across the Middle East and that the administration response was one of “willful ignorance.”

But a senior Obama administration official on Monday denied that Washington wanted the wider accommodation with Iran that its allies fear.

“The critics look at this as some part of a grand détente or reconciliation — that by getting this deal we will turn another cheek or grant them carte blanche,” said the official, who was not authorized to talk publicly about the nuclear talks.

“We have been and we remain just as concerned.”

And at the same time that it holds marathon talks with Iran, Washington is backing its ally Saudi Arabia and a Sunni coalition that is bombarding Iranian-backed Shiite Houthi militias in Yemen.

In Syria, the United States wants close Iranian ally President Bashar al-Assad gone after his murderous rampage against his own people.

But many Washington observers believe the United States has stepped back from the region and interpret the increasingly assertive military actions of Sunni states such as Saudi Arabia and Egypt as a sign that they feel Iran already has the upper hand. They see the Saudi coalition’s assault on the Houthis as a signal, not just to Iran, but to Washington.

“Our traditional Arab allies are apoplectic. We are involved against ISIS in Syria but essentially did nothing in the past three years as the Houthis took over Yemen,” said David Schenker, a former Bush administration official now with the Washington Institute for Near East Policy.

The Saudis are using Yemen to send messages “to Iran and to a lesser extent to us about their lack of confidence in the American security blanket being able to protect them from Iran’s machinations in the region,” said Stephen Seche, a former U.S. Ambassador to Yemen.

The White House said it has no illusions on Iran’s motives, but argued that the painful lessons of the last decade show a huge U.S. military operation in the Middle East is unlikely to reshape its politics.

“It’s definitely a regional power struggle,” said the senior administration official, stressing that Iran’s strategy dates from well before either the Arab Spring or the Iraq war, all the way back to the 1979 Islamic Revolution itself.

“It’s a geostrategic play to use these groups as pressure points, in some cases playing on Shiite grievances but also just to increase pressure on the Saudi border,” said the official.

The administration insists that a large-scale reintroduction of U.S. forces to the Middle East is not the correct policy response.

“It is going to be dictated by individual countries and the particular circumstances and what is the U.S. interest there,” the official said.

And the administration is not alone in believing the United States has a limited ability to influence what happens in the region.

“We can do things at the margins to help this side, reinforce that side, train another, arm another. So the U.S. position is likely to be quite modest,” said Richard Haass, chairman of the Council of Foreign Relations.

And Justin Logan, a specialist in geopolitics at the Cato Institute, warned that the United States must not get involved in the “pathological politics” of the region.

The idea that a proxy struggle between the Gulf Arabs and the Iranians can be effectively managed by the United States defies both logic and history,” he said.