The Middle East crsis: A war of all against all 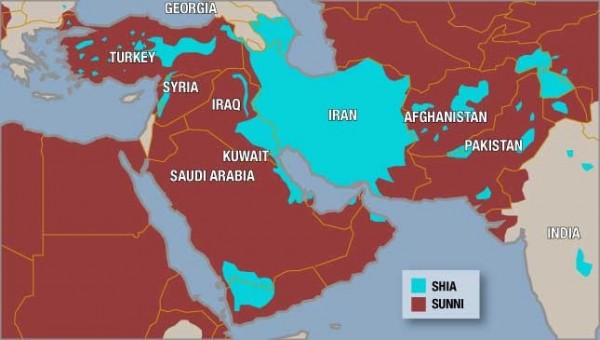 It has come to pass that in that long arc stretching from North Africa, through the Fertile Crescent and all the way to Yemen all is falling down. States, and non-state actors, sects and tribes, as well as armies, marauding killers, fanatic legionnaires, proxies and millenarians waving swords while hallucinating about the end of time, all are locked in a dizzying free fall with no deliverance in sight. In the past an ‘Arab Cold War’ raged between conservatives monarchies allied with the U.S. and Arab nationalist republics allied with the Soviet Union, there were also limited civil wars, and cross border clashes, and a number of Arab-Israeli wars, and fleeting Western sponsored alliances.

It has come to pass that in that long arc stretching from North Africa, through the Fertile Crescent and all the way to Yemen all is falling down. States, and non-state actors, sects and tribes, as well as armies, marauding killers, fanatic legionnaires, proxies and millenarians waving swords while hallucinating about the end of time, all are locked in a dizzying free fall with no deliverance in sight. In the past an ‘Arab Cold War’ raged between conservatives monarchies allied with the U.S. and Arab nationalist republics allied with the Soviet Union, there were also limited civil wars, and cross border clashes, and a number of Arab-Israeli wars, and fleeting Western sponsored alliances.

And while at times the political rhetoric sounded apocalyptic, and some wars like the Iran-Iraq war kept smoldering for years, the regional order did not collapse and those states whose borders were drawn as ‘lines in the sands’ proved resilient. But the current cataclysmic, multiple battlefields within and across borders have led to unprecedented disintegration of the state system and the fragmentation of societies, with the cancer of sectarianism spreading particularly in a very ailing Arab body politics. It shall come to pass also, that since it took decades of political dysfunction, economic and cultural stagnation and repressive governance to bring the Arabs to this nadir and the region to this impasse that it will take decades for these complex struggles to run their courses, and for the sectarian, political, ethnic and regional fault lines to settle into new patterns after the total exhaustion of the warriors.

The sad collapse of Arabia Felix

In the second decade of the twenty first century, the most common form of warfare in the Middle East (and South Asia) has been that of the phenomenon of the non-state actors battling each other’s while fighting and or receiving aid from their state sponsors. Sometimes these non-state actors act independently, (The Islamic State ISIS) but in many cases they act as powerful proxies (Hezbollah in Lebanon) to states unwilling to risk all, in all-out conventional conflicts. The decision by the countries of the Gulf Cooperation Council (GCC) led by Saudi Arabia along with other Arab and Sunni majority states like Pakistan to militarily intervene in Yemen in support of the Yemeni government against the Houthi rebellion supported by Iran, will be seen –regardless of how the military campaign unfolds- as a milestone in the current cataclysmic regional wars, stretching the front of Sunni-Shiite bloodletting from Yemen on the Indian Ocean, through Bahrain, Iraq, Syria and ending in Lebanon on the Mediterranean Sea. This nascent coalition, which was brought about partially by America’s reluctance to check Iran’s regional hegemonic ambitions, represents the first attempt by regional powers, mostly majority Sunni states to check and roll back Iran’s regional gains. While it is true that Iran did not create the so-called ‘Houthi problem’ it is also true that Iran has exploited the Houthis’ political grievances and became their ally.

Yemen’s slow descent towards disintegration has been in the making for years. The long reign of the former dictator Ali Abdullah Saleh has dragged the country to civil strife and near economic collapse. Saleh’s cynical alliance with the Houthis partly explains Yemen’s full descent into civil war. The famed prosperous ancient land the Romans called Arabia Felix (happy Arabia) today is neither whole nor happy, nor prosperous. There are four Arab majority states engulfed in civil wars: Syria, Iraq, Libya and Yemen. Three of them; Syria, Iraq and Yemen have devolved into proxy wars involving the United States, Iran and many traditional friends and allies of the United States such as Saudi Arabia, the United Arab Emirates and Turkey.

America’s decisions and alliances in the region of late have been tentative, contradictory, and tactical. The U.S. was quick to declare its support of the Saudi-led anti Houthi and anti-Iranian campaign in Yemen and lending logistical and Intelligence assistance. At the same time in Iraq, the U.S. is using its air power to cover the Shiite-led (and Iranian advised) land campaign to regain Tikrit from ISIS. In Iraq the U.S. is implicitly ‘partnering’ with Iran against ISIS. In Yemen the U.S. is publicly ‘partnering’ with the GCC against the Houthis, Iran’s friends. In Syria, the U.S. co-exists with the Assad regime, even while attacking, verbally of course, the regime’s savage use of barrel bombs and Chlorine gas, without denouncing Iran, the very country that saved the regime from imminent collapse. All the while the U.S. is very eager to reach a historic nuclear deal with Iran which will inevitably raise the ire of Arabs, Turks and Israelis.

The wars in Iraq and Yemen have forced the U.S. to make some surreal and painful decisions, ranging from reluctantly accepting the rising influence of Iraqi Shiite militias in the campaign against ISIS, to trying to destroy the American arsenal that fell into the hands of ISIS in Iraq and the Houthis in Yemen. President Obama’s words last year that America’s war against Al Qaeda in Yemen has been successful have come to haunt him. If President Obama’s decision not to hasten the fall of President Assad in Syria and to arm and equip the moderate Syrian opposition can explain in part at least his dismal record there, one can say the reverse in Yamen. Washington’s single fixation on combatting Al Qaeda in Yemen, and Obama’s failure to provide fuller and stronger support to Yemeni President Abd-Rabbu Mansour Hadi blinded the U.S. to the rising threat of the Houthis. In Iraq, Syria and Yemen, the Obama Administration was caught off guard when it failed to see the dangerous rise of ISIS in Syria and Iraq, or the collapse of the Iraqi army last summer, or the extent of the Houthi rebellion.

The raging civil wars, the emergence of ISIS, and the deepening Sunni-Shiite conflict and the resulting proxy wars of all against all, happened on President Obama’s watch, presenting his administration with a multiplicity of crisis and tough choices. Of course, President Obama is not responsible for the collapse of the regional state system. Arabs, Iranians and others are responsible in the main for their predicament. But president Obama’s deeply flawed decisions on Syria (not to deliver on promises to the opposition or threats to Assad’s regime) and his reluctance to challenge the sectarian policies of former Iraqi Prime Minister Nuri Al-Malaki have contributed to the chaos.

A war of all against all

The conflict between Iran and Saudi Arabia while it is framed by many as a sectarian one is in fact a political conflict over national security interests and influence. Sectarianism is a powerful tool for social/political mobilization, and a lethal weapon for demonization. People rarely fight each other over theological disputations, and even when they do that, they should be reminded that at core the conflict is political and can be understood rationally. The sectarian fires have only been stoked in the last few decades, with few milestones contributing to it; the Iranian Revolution, the Iran-Iraq war, the conflict between the Islamists in Syria and the Assad dynasty since 1970, and finally the American invasion of Iraq.

Iran has been especially effective in inspiring and helping the Shiite Arabs, many of whom may have felt a sense of political empowerment following the Revolution of 1979. Iran played a crucial role in the creation, funding and training of Hezbollah in Lebanon. In the conflicts of Syria and Iraq, Iran coordinated with Hezbollah in Lebanon and used it as an auxiliary force. Similar relations were developed between Iran and Iraqi Shiite groups. To put it bluntly, Iran can and is fighting its Arab foes by deploying Arab Shiites as auxiliaries as we have seen in Syria and Iraq in the last few years. No Sunni Arab or non-Arab power can make such a claim.

In Leviathan, Thomas Hobbes paints a grim reality of life in the absence of order, a condition he called the state of nature, where the dominant rule is that there are no rules, a situation that leads to a ‘war of all against all’. The fraying or the collapse of the nation-state in the Arab world resulting in civil wars, proxy wars, the emergence of the marauding religious extremists have combined to push the region into a state of ‘war of all against all’. No Deus ex machina (a device employed in Greek tragedy allowing for divine intervention) will intervene to end this Arab tragedy. Civil wars are usually ended by one side winning the fight decisively, or when exhaustion forces a compromise or by foreign intervention. None of the regional sponsors of proxies is powerful enough to establish regional hegemony without serious challenges. There will come a moment in history where Arabs, Iranians, Turks, Israelis, Kurds and others, Sunnis and Shiites, Christian and Jews and atheists will be utterly exhausted before they realize that in a ‘war of all against all’ everyone loses. I shudder when I think that, I will not see that moment of bliss in my lifetime.