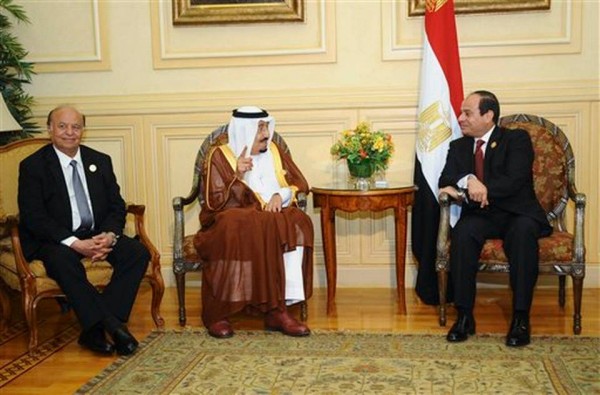 Yemen’s embattled president on Saturday called Shiite rebels who forced him to flee the country “stooges of Iran,” directly blaming the Islamic Republic for the chaos there and demanding airstrikes against rebel positions continue until they surrender.

With Egypt’s president also calling for a regional Arab military force and another Gulf diplomat separately warning Saudi-led airstrikes in Yemen could go on for months, the specter of a regional conflict pitting Arab nations against Shiite power Iran also has been raised.

The comments by Arab leaders including Yemeni President Abdel Rabbo Mansour Hadi, who fled his country only days earlier, came at an Arab summit largely focusing on the chaos there caused by the advance of the rebels, known as Houthis.

Other leaders, including the leaders of Egypt, Saudi Arabia and Kuwait, obliquely referenced Iran earlier at the summit held in Egypt’s Red Sea resort of Sharm el-Sheikh. They blamed the Persian country for meddling in the affairs of Arab nations, with Egyptian President Abdel-Fattah el-Sissi saying, without mentioning Iran by name, that it was “spreading its ailment in the body.”

“This (Arab) nation, in its darkest hour, had never been faced a challenge to its existence and a threat to its identity like the one it’s facing now,” el-Sissi said. “This threatens our national security and (we) cannot ignore its consequences for the Arab identity.”

Hadi directly challenged Iran in his remarks and called for his supporters to rise up in peaceful protest against the Houthis.

“I say to the puppets of Iran and its toys: … You’ve destroyed Yemen,” Hadi said.

Iran and the Houthis deny that Tehran arms the rebel movement, though the Islamic Republic has provided humanitarian and other aid. Officials in Iran had no immediate comment on Hadi’s remarks.

Hadi also said the airstrikes launched by Saudi Arabia and its allies against the Houthis must not stop before the rebels surrender and return medium and heavy weapons they looted from army depots across much of the country. Saudi Arabia’s monarch, King Salman, earlier pledged that the military campaign in Yemen would not stop before security and stability are restored.

Hadi fled Yemen earlier this week, making his way to Saudi Arabia after leaving the southern coastal city of Aden in the face of a push into southern Yemen by the Houthis and their allies, including forces loyal to ousted leader Ali Abdullah Saleh.

El-Sissi also endorsed a resolution adopted by Arab foreign ministers on Thursday for the creation of an Arab military force, saying the Arab world was currently facing unprecedented threats. He also described as “inevitable” the Saudi-led intervention in Yemen.

Already, some backers of Iran have begun to step away from supporting it over Yemen. On Saturday, the militant group Hamas, which controls the Gaza Strip, issued a statement offering support for Hadi, as opposed to the rebels.

A Gulf diplomatic official, meanwhile, told reporters that the airstrikes campaign was planned to last for one month, but that coalition nations were prepared for the probability of going on for five to six months.

“Ultimately the whole idea is to achieve the political objective, which is the return of legitimacy of Yemen and a return to the political process,” said the diplomat, who spoke on condition of anonymity as he wasn’t authorized to brief journalists by name.

The official also claimed that around 5,000 Iranian, Lebanese Hezbollah and Iraqi Shiite militiamen were on the ground in Yemen supporting the Houthis. They are trainers, group leaders and instructors, he added. His claim could not be independently corroborated.

Around six weeks ago, he said, satellite imagery from Yemen showed the repositioning of Scud missiles toward Saudi Arabia. Airstrikes have so far destroyed 21 Scud missiles, he said.

Meanwhile Saturday, Yemeni military officials said an explosion rocked the Jabal al-Hadid military camp in Aden that houses a weapons depot and had been taken by pro-Saleh forces, killing and wounding several people. The officials spoke on condition of anonymity because they were not authorized to release the information otherwise. Security officials speaking anonymously for the same reasons said that three people were killed in different areas of Aden on Saturday.

The Saudi Press Agency also reported Saturday that its navy had evacuated 86 diplomats and others from Aden on Wednesday. It did not identify the nationalities of all those it evacuated in the operation, though it said diplomats from the United Arab Emirates and Qatar were on hand Saturday when those evacuated arrived at a Jiddah naval base.

Pakistan also announced Saturday it had two planes standing by to evacuate its citizens.

Dozens of foreign diplomats, including United Nations staff, still were awaiting evacuation Saturday by air in Sanaa, airport officials said on condition of anonymity because they weren’t authorized to release the information.