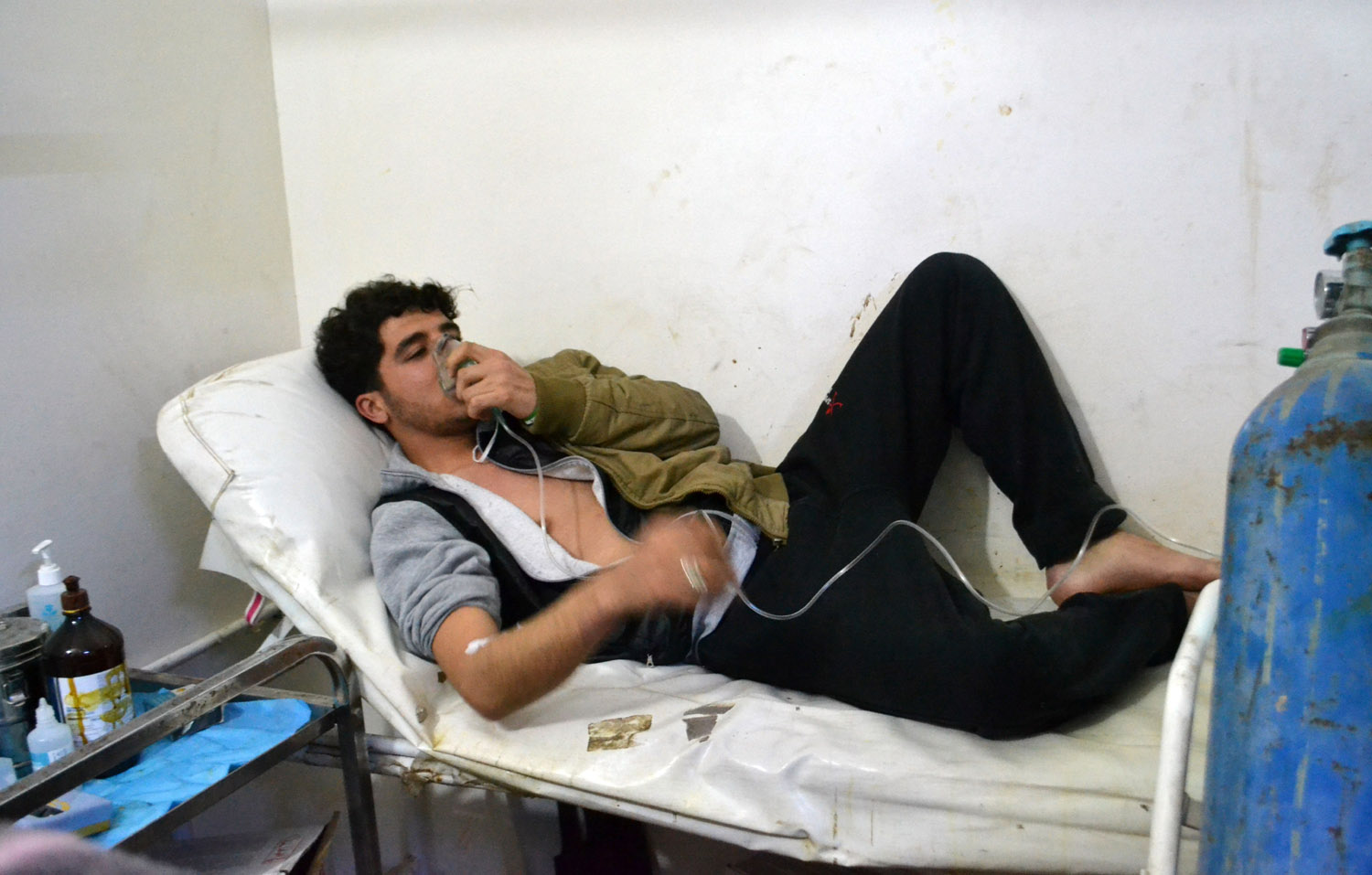 A young man breathes with an oxygen mask at a clinic in the village of Sarmin on March 17. Syrian activists and opposition members claimed that government helicopters carried out a chlorine gas attack that targeted the town of Sarmin in northwestern Idlib province. Photo: Getty Images
Share:
The global chemical weapons watchdog will investigate allegations of a chlorine gas attack on a Syrian village that killed six and wounded dozens earlier this month, a source told Reuters on Thursday.

The source at the Organization for the Prohibition of Chemical Weapons (OPCW), who spoke on condition of anonymity, said a fact-finding mission will examine reports that barrel bombs were dropped on Sarmin village in Idlib province.

“It will be investigated,” said the source, referring to the March 16 attack.

The OPCW launched the fact-finding mission nearly a year ago to investigate claims of chlorine gas attacks and it has found that chlorine gas use is “systematic” in Syria’s four year civil war. The mission establishes the facts, but does not lay blame.

The attack on Sarmin came 10 days after the United Nations Security Council condemned the use of chlorine as a weapon in Syria and threatened to take action if such arms are used again in the conflict.

Council veto power and Syrian ally Russia made clear that strong evidence would be needed before any action could be taken by the 15-member Security Council.


“We categorically do not accept the possible use of sanctions … without an attempt to confirm (non-compliance) based on proof,” Russian U.N. Ambassador Vitaly Churkin told the council on March 6.

Both sides have denied using chlorine “barrel” bombs, which the OPCW said are dropped from helicopters. The Syrian air force is the only party in the conflict known to have helicopters.

A group monitoring Syria’s war has accused government forces of conducting the attack on Sarmin, not far from the Turkish border. The Britain-based Syrian Observatory for Human Rights said the six dead included a couple and their three children.

The Syrian military denied carrying out the attack.

If inhaled, chlorine gas turns to hydrochloric acid in the lungs, which can lead to internal burning and drowning through a reactionary release of fluid.

U.S. Secretary of State John Kerry said he was “deeply disturbed” by the reports of renewed use of chlorine gas, last used widely in World War One.

Although chlorine is not a prohibited substance, its use as a chemical weapon is prohibited under the 1997 Chemical Weapons Convention, which Syria joined in 2013.

Syria agreed to destroy its chemical weapons, under a deal brokered with the United States and Russia, after hundreds of people were killed in a sarin gas attack on the outskirts of the capital, Damascus.

The government of President Bashar al Assad has since handed over 1,300 tonnes of toxic chemicals and is destroying production and storage facilities.

The United Nations says more than 220,000 people have been killed in Syria since security forces cracked down on a pro-democracy movement in 2011, triggering an armed uprising.
Reuters