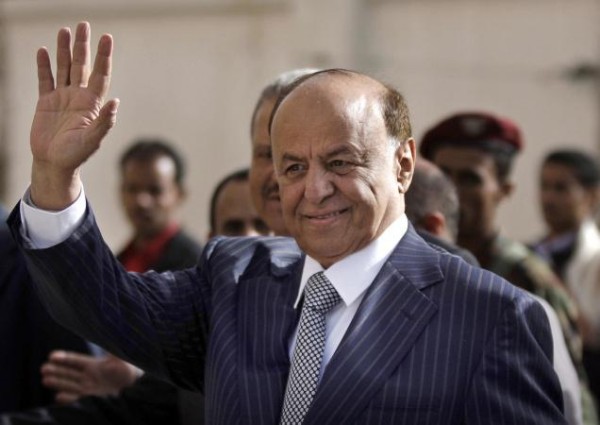 Yemeni President Abed Rabbo Mansour Hadi fled the country by sea Wednesday on a boat from Aden, as Shiite rebels and their allies advanced on the southern port city where he had taken refuge, captured his defense minister and seized the city’s airport.

Hadi’s departure marks a dramatic turn in Yemen’s turmoil and means a decisive collapse of what was left of his rule, which the United States and Gulf allies had hoped could stabilize the chronically chaotic nation and fight al-Qaida’s branch here after the 2011 ouster of longtime autocrat Ali Abdullah Saleh.

Over the past year, the Shiite rebels known as Houthis, who are believed to be supported by Iran, have battled their way out of their northern strongholds, overwhelmed the capital, Sanaa, seized province after province in the north and worked their way south. Their advance has been boosted by units of the military and security forces that remained loyal to Saleh, who allied with the rebels.

With Hadi gone, there remains resistance to the Houthis scattered around the country, whether from Sunni tribesmen, local militias, pro-Hadi military units or al-Qaida fighters.

Hadi and his aides left Aden after 3:30 p.m. on two boats, security and port officials told The Associated Press. The officials would not specify his destination. But Hadi is scheduled to attend an Arab summit in Egypt on the weekend, where Arab allies are scheduled to discuss formation of a joint Arab force that could pave the way for military intervention against Houthis.

His flight came after Houthis and Saleh loyalists advanced against Hadi’s allies on multiple fronts. Military officials said militias and military units loyal to Hadi had “fragmented,” speeding the rebel advance. The officials spoke on condition of anonymity because they were not authorized to speak to reporters

Earlier in the day, the rebels seized a key air base where U.S. troops and Europeans had advised the country in its fight against al-Qaida militants. The base is only 60 kilometers (35 miles) away from Aden.

In the province of Lahj, adjoining Aden, the rebels captured Hadi’s defense minister, Maj. Gen. Mahmoud al-Subaihi, and his top aide on Wednesday and subsequently transferred them to the capital, Sanaa. Yemen’s state TV, controlled by the Houthis, announced a bounty of nearly $100,000 for Hadi’s capture.

Hadi then fled his presidential palace, and soon after warplanes targeted presidential forces guarding it. No casualties were reported. By midday, Aden’s airport fell into hands of Saleh’s forces after intense clashes with pro-Hadi militias.

Aden was tense Wednesday, with schools, government offices, shops and restaurants largely closed. Inside the few remaining opened cafes, men watched the news on television. With the fall of the city appearing imminent, looters went through two abandoned army camps, one in Aden and the other nearby, taking weapons and ammunition.

The takeover of Aden, the country’s economic hub, would mark the collapse of what is left of Hadi’s grip on power. After the Houthis overran Sanaa in September, he had remained in office, but then was put under house arrest. He fled the capital earlier in March with remnants of his government and declared Aden his temporarty capital.

Yemen’s Foreign Minister Riad Yassin told Dubai-based Al-Arabiya TV satellite news network that he officially made a request to the Arab League on Wednesday to send a military force to intervene against the Houthis. Depicting the Houthis as a proxy of Shiite Iran, a rival to Sunni Gulf countries, he warned of an Iranian “takeover” of Yemen. The Houthis deny they are backed by Iran.

Mohammed Abdel-Salam, a spokesman for the Houthis, said their forces were not aiming to “occupy” the south. “They will be in Aden in few hours,” Abdel-Salam told the rebels’ satellite Al-Masirah news channel.

Earlier, Al-Masirah reported that the Houthis and allied fighters had “secured” the al-Annad air base, the country’s largest. It claimed the base had been looted by both al-Qaida fighters and troops loyal to Hadi.

The base was crucial in the U.S. drone campaign against Al-Qaida in the Arabian Peninsula, which Washington considers to be the most dangerous offshoot of the terror group. And American and European military advisers there also assisted Hadi’s government in its fight against al-Qaida’s branch, which holds territory in eastern Yemen and has claimed the attack on the French satirical magazine Charlie Hebdo in Paris.The U.S. recently evacuated some 100 soldiers, including Special Forces commandos, from the base after al-Qaida briefly seized a nearby city. Britain also evacuated soldiers.

U.S. operations against the militants have been scaled back dramatically amid Yemen’s chaos. U.S. officials have said CIA drone strikes will continue in the country, though there will be fewer of them. The agency’s ability to collect intelligence on the ground in Yemen, while not completely gone, is also much diminished.

The Houthis, in the aftermath of massive suicide bombings in Sanaa last week that killed at least 137 people, ordered a general mobilization and their leader, Abdel-Malik al-Houthi, vowed to send his forces to the south to fight al-Qaida and militant groups.

In Sanaa, dozens of coffins were lined up for a mass funeral of the victims Wednesday. Among the victims was a top Shiite cleric. Yemen’s Islamic State-linked militants have claimed responsibility for the attack.

The Houthis seized the capital, Sanaa, in September and have since been advancing south along with Saleh’s loyalists. On Tuesday, they fired bullets and tear gas to disperse thousands of protesters in the city of Taiz, known as the gateway to southern Yemen. Six demonstrators were killed and scores more were wounded, officials said.

The Houthis also battled militias loyal to Hadi in the city of al-Dhalea, adjacent to Taiz, Yemen’s third-largest city. Taiz is also the birthplace of its 2011 Arab Spring-inspired uprising that forced Saleh to hand over power to Hadi in a deal brokered by the U.N. and Gulf countries.

Hadi on Tuesday asked the U.N. Security Council to authorize a military intervention “to protect Yemen and to deter the Houthi aggression” in Aden and the rest of the south. In his letter, Hadi said he also has asked members of the six-nation Gulf Cooperation Council and the Arab League for immediate help.

Saudi Arabia warned that “if the Houthi coup does not end peacefully, we will take the necessary measures for this crisis to protect the region.”