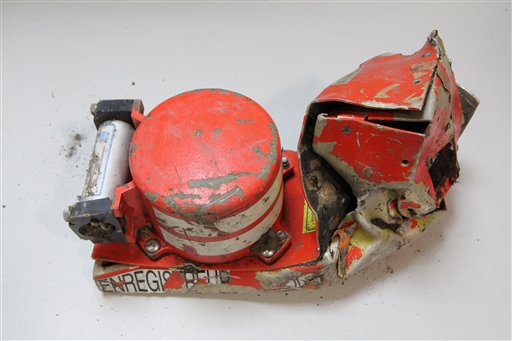 This photo provided in Paris, Wednesday, March 25, 2015 by the BEA, the French Air Accident Investigation Agency, shows the voice data recorder of the Germanwings jetliner that crashed Tuesday in the French Alps. French investigators cracked open the badly damaged black box of a German jetliner on Wednesday and sealed off the rugged Alpine crash site where 150 people died when their plane on a flight from Barcelona, Spain to Duesseldorf slammed into a mountain. (AP Photo/Bureau d’Enquetes et d’Analyses)
Share:

By GREG KELLER and ELAINE GANLEY

The first half of Germanwings Flight 9525 was chilling in its normalcy. It took off from Barcelona en route to Duesseldorf, climbing up over the Mediterranean and turning over France. The last communication was a routine request to continue on its route.

Minutes later, at 10:30 a.m. Tuesday, the Airbus A320 inexplicably began to descend. Within 10 minutes it had plunged from its cruising altitude of 38,000 feet to just over 6,000 feet and slammed into a remote mountainside.

To find out why, investigators have been analyzing the mangled black box that contains an audio recording from the cockpit. Remi Jouty, the head of France’s accident investigation bureau BEA, said Wednesday that it has yielded sounds and voices, but so far not the “slightest explanation” of why the plane crashed, killing all 150 on board.

A newspaper report, however, suggests the audio contains intriguing information at the least: One of the pilots is heard leaving the cockpit, then banging on the door with increasing urgency in an unsuccessful attempt to get back in.

“The guy outside is knocking lightly on the door and there is no answer,” The New York Times quotes an unidentified investigator as saying. “And then he hits the door stronger and no answer. There is never an answer.”

Eventually, the newspaper quotes the investigator as saying: “You can hear he is trying to smash the door down.”

The investigator, whom the newspaper said could not be identified because the investigation is continuing, said officials don’t know why the pilot left. He also does not speculate on why the other pilot didn’t open the door or make contact with ground control before the crash.

Since the Sept. 11 terrorist attacks, airlines in the U.S. don’t leave one pilot alone in the cockpit. The standard operating procedure is that if one of the pilots leaves — for example to use the bathroom — a flight attendant takes their spot in the cockpit. It was not immediately clear if European airlines have adopted the same practice.

The names of the pilots have not been released.

French officials gave no details from the recording on Wednesday, insisting the cause of the crash remained a mystery. They said the descent was gradual enough to suggest the plane was under the control of its navigators.

“At this point, there is no explanation,” Jouty said. “One doesn’t imagine that the pilot consciously sends his plane into a mountain.”

Jouty said “sounds and voices” were registered on the digital audio file recovered from the first black box. But he did not divulge the contents, insisting days or weeks will be needed to decipher them.

Confusion surrounded the fate of the second black box. French President Francois Hollande said the casing of the flight data recorder had been found in the scattered debris, but was missing the memory card that captures 25 hours’ worth of information on the position and condition of almost every major part in a plane. Jouty refused to confirm the discovery.

As authorities struggled to unravel the puzzle, Hollande, German Chancellor Angela Merkel and Spanish Prime Minister Mariano Rajoy converged on the remote accident site to pay their respects to the dead — mostly German and Spanish citizens among at least 17 nationalities.

“This is a true tragedy, and the visit here has shown us that,” Merkel said after she and Hollande overflew the desolate craggy mountainside.

Helicopters ferried in rescue workers and other personnel throughout the day. More than 600 rescue and security workers and aviation investigators were on site, French officials said.

Germanwings CEO Thomas Winkelmann said the airline was in the process of contacting victims’ families. He said the 144 passengers and six crew members included 72 Germans, 35 Spaniards, three Americans and two people each from Australia, Argentina, Iran, Venezuela, and one person each from Britain, the Netherlands, Colombia, Mexico, Japan, Denmark, Belgium and Israel.

The three Americans included a mother and daughter, the U.S. State Department said. Some of the victims may have had dual nationalities; Spain’s government said 51 citizens had died in the crash.

Two babies, two opera singers and 16 German high school students and their teachers returning from an exchange program in Spain were among those who lost their lives.

The principal of Joseph Koenig High School, Ulrich Wessel, called the loss a “tragedy that renders one speechless.”

In Spain, flags flew at half-staff on government buildings and a minute of silence was held in government offices across the country. Parliament canceled its Wednesday session.

Barcelona’s Liceu opera house held two minutes of silence at noon to honor the two German opera singers, Oleg Bryjak and Maria Radner, who were returning home after a weekend performance at the theater.

Germanwings canceled several flights Wednesday because some crews declared themselves unfit to fly after losing colleagues.