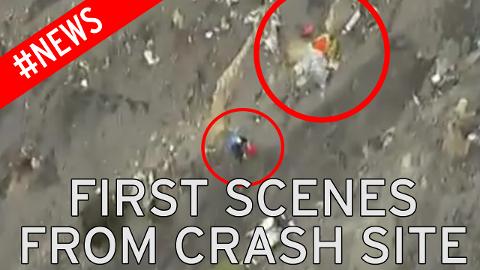 This is the first footage from the Germanwings Airbus A320 crash site, emerging moments after authorities confirmed that they have found the plane’s black box.

The doomed flight disappeared from radar 45 minutes after leaving Barcelona in Spain for Dusseldorf in Germany at 10am local time, crashing in the French Alps.

Rescue workers rushed to the site, and have since confirmed that they have retrieved the black box.

French interior minister Bernard Cazeneuve said: “A black box that we found a few hours after the crash will immediately be examined to help the investigation move forward quickly.”

Describing the site, Air Ambulance Lieutenant Eric Sapet told La Marseillaise: “Everything at the crash site is pulverised, you cannot make out the shape of the plane nor any of the bodies.”

The news comes after the local MP Christophe Castaner described the ‘horror’ of the crash site, saying it was covered in “nothing but debris and bodies”.

Footage showing the rescue efforts was taken by a helicopter surveying the mountainous site, capturing how debris from the plane is scattered across the French Alps.

It also shows rescue workers scaling the alps, which emergency services are now working to make more accessible for authorities to enter.

As first feared when French president Francois Hollande made his statement this morning, it has been confirmed that there were no survivors.

150 people, including passengers and crew, were thought to have been on board at the time of the crash.