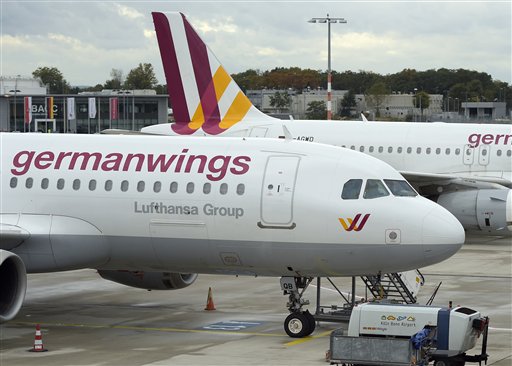 FILE – In this Oct. 16, 2014 an Airbus A 320 of the German airline Germanwings is parked at the airport in Cologne, Germany, as their pilots went on strike. French President Francois Hollande said no survivors are likely in the Alpine crash of a passenger jet carrying 148 people. The Germanwings passenger jet crashed Tuesday, March 24, 2015 in the French Alps region as it traveled from Barcelona to Duesseldorf, French officials. (AP Photo/Martin Meissner)
Share:
A passenger jet carrying at least 147 people crashed Tuesday in a remote area of the French Alps as it flew from Barcelona to Duesseldorf, authorities said. As search-and-rescue teams raced to the region, France’s president warned that no survivors were expected.

The crash site was at Meolans-Revels, near the popular ski resort of Pra Loup, according to Eric Ciotti, the head of the regional council in southeast France. But with mountains all around and few clear trails to the snow-covered area, access to the crash site was expected to take time.

The Germanwings Airbus A320 plane left Barcelona at 9:55 a.m., sent out a distress signal at 10:45 a.m., then crashed in a mountainous zone at an altitude of about 2,000 meters (6,550 feet), said Pierre-Henry Brandet, the French Interior Ministry spokesman.

Brandet told BFM television he expected “an extremely long and extremely difficult” search and rescue operation because of the area’s remoteness.

Germanwings is a lower-cost unit of Lufthansa, Germany’s biggest airline. It has been operating since 2002, part of traditional national carriers’ response from rising European budget carriers. It serves mainly European destinations.

The exact number of people on board the plane was unclear. The French newspaper La Provence, citing aviation officials, said the plane carried at least 142 passengers, two pilots and four flight attendants. But later Antonio San Jose, spokesman for the Spanish airport authority AENA, said his agency’s best information was that 147 people were on board.

There was no obvious reason why the plane went down. Capt. Benoit Zeisser of the Digne-le-Bains police said there were some clouds in the region but the cloud ceiling was not low and there did not appear to be turbulence.

The A320 plane is a workhorse of modern aviation. Similar to the Boeing 737, the single-aisle, twin-engine jet is used to connect cities that are between one and five hours apart. Worldwide, 3,606 A320s are in operation, according to Airbus.

The A320 family has a good safety record, with just 0.14 fatal accidents per million takeoffs, according to a Boeing safety analysis.

The safest part of a flight is when the plane is at cruise elevation. Just 10 percent of fatal accidents occur while at that point, according to a safety analysis by Boeing. In contrast, takeoff and the initial climb accounts for 14 percent of crashes and final approach and landing accounts for 47 percent.

The A320 is certified to fly up to 39,000 feet, its maximum altitude before its rate of climb begins to erode. But it can begin to experience problems as low as 37,000 feet, depending on temperature and weight, including fuel, cargo and passengers.

In a live briefing Tuesday, Hollande said it was likely that a number of the victims were German. He said it was not clear whether anyone on the ground had been injured by the crash.

Later he spoke with German Chancellor Angela Merkel to express his condolences. Her spokesman said Merkel was “deeply shocked” by the crash and cancelled all other appointments for the day.

The German Federal Bureau of Aircraft Accident Investigation said it was sending three people to France to join the investigation. French Interior Minister Bernard Cazeneuve, the country’s top security official, and the German ambassador in Paris were among those headed to the crash site.

San Jose, the Spanish airport authority spokesman, said his agency was working with Germanwings to reach out to relatives of the victims. Spain’s king and queen were in Paris on Tuesday for a previously planned state visit.

The last time a passenger jet crashed in France was the 2000 Concorde accident, which left 113 dead — 109 in the plane and four on the ground.