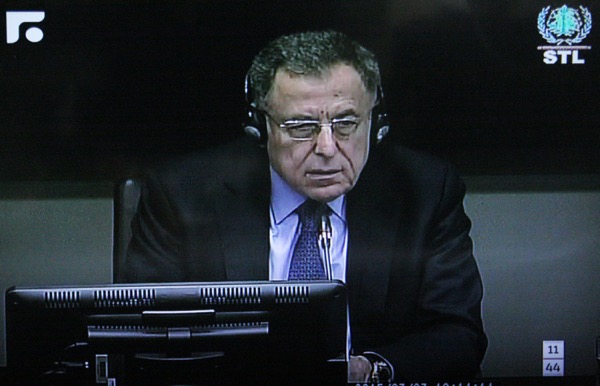 Former Lebanese prime minister and the leader of the Future Movement Parliamentary bloc MP Fouad Siniora during his testimony a the Special Tribunal for Lebanon
Share:

Former Lebanese prime minister and the leader of the Future Movement Parliamentary bloc MP Fouad Siniora told the Special Tribunal for Lebanon during his testimony on Monday that President Bashar Assad of Syria threatened Hariri to break Lebanon on his head if he did not agree to extend the presidential term of Emil Lahoud.

STL was formed to tackle the assassination of former PM Rafik Hariri who was assassinated in a huge bombing in Beirut on February 14, 2005.

In his testimony Siniora who was very close to Hariri focused on the Syrian regime during the 1990s and early 2000s, as well as the influence the Syrian security apparatus wielded on Lebanon during the 29 years of military occupation.

He told the trial chamber at The Hague: “The Syrian regime sought to extend the term of then President Emile Lahoud, promising us that a ‘new Lahoud’ would emerge in the aftermath of the constitutional amendment.”

The debate over the extension of Lahoud’s term in 2004 was among the factors that led to the strain in ties between Hariri and the Syrian regime.

The extension required a constitutional amendment in Lebanon.

He said that Hariri received “the order to extend Lahoud’s term from Assad during a meeting in August 2004 in Damascus .”

“Assad was quoted as saying that Hariri must accept the extension or he would break Lebanon on his head,” Siniora said

Siniora, who also opposed the extension revealed that he refused to attend a cabinet session two days later in August aimed at tackling the extension.

“I received a telephone call from my wife and Wissam al-Hassan urging me to attend the session in order to avoid appearing that I was abandoning Hariri,” the MP revealed.

Brigadier general Wissam al-Hassan, was Hariri’s head guard from June 2001 to Summer 2004. He later became the head of its Internal security intelligence branch and was killed on October 19, 2012, in a large explosion in Beirut’s Achrafieh district. Hezbollah and the Syrian regime were acused of being behind Hassan’s assassination.

Siniora said that he acquiesced to the demands in spite of his rejection, adding that the extension “almost made me retire from politics.”

“The Syrian intelligence pledged that we would be faced with a different Lahoud than the one we had to deal with so far if we accepted the extension,” he continued.

“We however did not see or sense any change in his manner after the extension and Hariri contacted the head of Syrian intelligence in Lebanon Rustom Ghazali to address the issue,” Siniora added.

Siniora told the court that Hariri sought to reconstruct Lebanon and build a strong Lebanese state, which he said threatened the Syrian regime that aimed to maintain its grip over the country,

“This prompted it to wage campaigns against the slain premier aimed at tarnishing his image”. He said

This campaign was wielded by the Syrian security apparatus, as well as its Lebanese allies, Siniora explained without naming them.

“Hariri had many enemies and whoever reviews the history at the time would realize very well who they are,” he stressed.

“Lahoud had animosity towards Hariri, but he was not the only one,” he stressed.

Siniora was then prompted by Trial Chamber Judge David Re to name officials that were pressuring Hariri, to which he replied: “Several officials were responsible and I cannot name them all.”

He was then asked to name whom he thought were responsible to which Siniora responded that these officials include figures who were part of the security apparatus, as well as journalists and politicians.

He was asked who the main source of the incitement against Hariri was, to which he replied: “There was deep cooperation between the Lebanese and Syrian apparatuses.”

“The Syrian apparatus wielded more power over the Lebanese one ,” he revealed.

“Neither him nor Ghazaleh had animosity towards Hariri, but the respective apparatuses used them to their ends,” he stated.

“Ghazali wielded more power because he represented the Syrian side and he was the visible tool in Lebanon of the Syrian regime,” said Siniora.

“Ghazali used to refer his reports on Lebanon to officials above him. I have not met them, nor do I wish to meet them, but I have heard of them. They are part of the circle just below Assad,” he remarked.

Addressing the October 2004 assassination attempt against MP Marwan Hamadeh in 2004, Siniora stated: “Hariri believed that it was a message against him, but he still told all who warned him that they would never dare harm him.”

“I cannot identify who was behind the assassination attempt. I can say that it was a political stance and I can only wonder who was capable of such an act,” he continued.

“Hariri believed that those responsible for the security system where behind the attempt against Hamadeh’s life, but he didn’t have any evidence,” noted the MP.

“The attack against Hamadeh cannot be a random one, but given the circumstances at the time, it was aimed at intimidating us,” he explained.

Earlier, Siniora had stated that “Hariri’s ties with late Syrian President Hafez Assad differed than those with President Bashar Assad.”

He spoke of the “strong grip” the Syrian security apparatus had on the Lebanese government at the time, adding: “Nothing could be done without the regime’s approval.”

He gave an example of how he sought the nomination of current MP Ghazi Youssef as parliament speaker, but the regime opposed it.

Syria also wielded its influence in how Hariri formed his government in 1997, continued the the former PM.

It sought to impose three ministers of its choice on the premier, but Hariri rejected the names.

He held a long meeting with Hafez Assad during that time in order to “explain to him that the political and security conditions at the time were not suitable for the appointment of those figures,” explained Siniora.

“Hariri sought my appointment along with Bahij Tabbara and Samir al-Jisr instead,” he stated.

“Efforts were being made to completely link Lebanon to Syria through the Syrian security apparatus and its Lebanese allies,” Siniora remarked

Earlier, Siniora told the court how he met Hariri, saying that they knew each other as acquaintances at the same school in the southern city of Sidon where they both hail from.

They became closer when they joined a political party in the early 1960s.

“I enjoyed strong ties with Hariri and we always spoke frankly with each other,” added Siniora.

“Hariri and I had common financial interests, but we were also concerned with the interests of the people and improving their daily lives, which was dear to the former premier,” he emphasized.

“Hariri was keen on Lebanon and he sought to cooperate with me and several others to improve the country” in the wake of the 1975-90 civil war, he continued.

STL kicked off its trial in 2014 and has so far listened to the testimonies of several witnesses, including Marwan Hamade and a number of lawmakers and journalists .

So far the testimonies have been focusing on the political aspect of the assassination and Hariri’s ties with Syria.

Siniora’s testimony and that of Progressive Socialist Party leader MP Walid Jumblatt may be among the most significant in the trial.

Jumblatt,whose father was also killed by the Syrian regime in 1977 was also very close to Hariri . He is expected to testify before the UN-backed court in June, al-Joumhouria newspaper reported last week .