US withdraws and Shiite Houthi rebels call for Yemen offensive 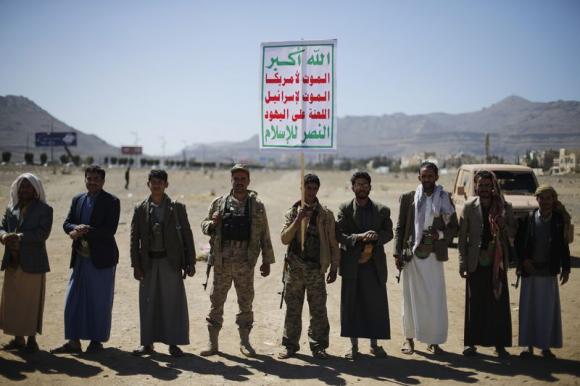 Yemen’s Shiite rebels issued a call to arms Saturday to battle forces loyal to the country’s embattled president, as U.S. troops were evacuating a southern air base crucial to America’s drone strike program after al-Qaida militants seized a nearby city.

The turmoil comes as Yemen battles al-Qaida in the Arabian Peninsula, the target of the drone program, and faces a purported affiliate of the extremist Islamic State group that claimed responsibility for a series of suicide bombings killing at least 137 people Friday.

All these factors could push the Arab world’s most impoverished country, united only in the 1990s, back toward civil war.

“I hate to say this, but I’m hearing the loud and clear beating of the drums of war in Yemen,” Mohammed al-Basha, a spokesman for the Yemeni Embassy in Washington, D.C., wrote on Twitter.

The Shiite rebels, known as Houthis, swept into Yemen’s capital, Sanaa, in September and now control it and nine of the country’s 21 provinces. President Abed Rabbo Mansour Hadi, a one-time prisoner of the Houthis in his own home, escaped last month and installed himself in Aden, declaring it the temporary capital amid the Houthi insurrection.

Earlier Saturday, Hadi gave his first televised address since fleeing the capital, striking a defiant tone. He described the rebels’ rule as “a coup against constitutional legitimacy.” He also pledged to raise the Yemeni flag over the Maran mountains, a stronghold for the Houthis, members of the Shiite Zaydi sect that represents nearly 30 percent of Yemen’s population.

Hadi also said regional Shiite power Iran supported the Houthis, something critics also allege and the rebels deny. Sunni Gulf countries have lined up to support Hadi and have moved their embassies to Aden to back him against the Shiite rebels.

Almost immediately after Hadi’s speech, the Houthis issued a statement announcing their offensive against security and military institutions loyal to Hadi, calling it a battle against extremists.

“The council announces this decision to call the proud sons of the Yemeni people in all regions to unite and support and cooperate with the armed and security forces in confronting terrorist forces,” they said in the statement carried by the Houthi-controlled state news agency SABA.

Though seizing power in Sanaa and clashing with those protesting their power grab, the Houthis largely haven’t resorted to open warfare since beginning their campaign in September. Their statement Saturday immediately recalled the years of war fought in the country, once split between a Marxist south that once was a British colony and a northern republic.

As the threat of civil war grew, the U.N. Security Council called an emergency meeting for Sunday afternoon beginning at 3 p.m. (1900 GMT) to discuss the Yemen crisis. The U.N. spokesman’s office said that after a briefing on the situation in Yemen, the council would meet in closed session for consultations. Representatives of Yemen and Qatar, which currently heads the Gulf Cooperation Council, were scheduled to speak.

Meanwhile Saturday, U.S. troops including Special Forces commandos were evacuating from the al-Annad air base in southern Yemen, Yemeni security and military officials said. The officials did not say whether the troops had left the country.

The air base, the country’s largest, was believed to have some 100 American troops stationed there. U.S. officials did not immediately respond to a request for comment Saturday.

Saturday night, a security official in Aden said a military transport plane from Oman evacuated 16 British military and security forces. He and other security officials spoke on condition of anonymity because he wasn’t authorized to release the information.

On Friday, al-Qaida militants seized control of the southern provincial capital of al-Houta in the group’s most dramatic grab of territory in years. That’s just nearby the al-Annad air base, which has been the scene of rocket attacks in the past by militants.

Maj. Gen. Mahmoud al-Subeihi, the country’s defense minister who is loyal to Hadi, said troops would be deployed near the base to protect it from militants.

The al-Annad base is where American and European military advisers help Yemen battle the country’s local al-Qaida branch through drone strikes and logistical support. That group, which holds territory in eastern Yemen, has said it directed the recent attack against the French satirical magazine Charlie Hebdo in Paris.

U.S. forces also have been involved in at least two hostage rescue raids in Yemen in recent months, including one that saw militants kill an American photojournalist and a South African teacher in December.

It’s unclear what the pullout will mean for the drone program. The U.S. has carried out more than 100 suspected drone strikes in Yemen since 2009, according to the New America Foundation’s International Security Program, which tracks the American campaign. Civilian casualties from the strikes have stoked widespread anti-American sentiment in the country.

All this comes a day after suicide bombers attacked a pair of mosques in Sanaa, unleashing monstrous blasts that killed 137 people, including at least 13 children. A purported affiliate of the Islamic State group claimed responsibility for the bombings, which also wounded 357 people — raising the alarming possibility the extremist group has expanded its presence to Yemen after already setting up a branch in Libya. U.S. officials expressed skeptisim about the claim, though there have been several online statements by individual Yemeni militants declaring allegiance to the Islamic State group.

The presence of the Islamic State group could set up yet another conflict in Yemen, as al-Qaida and the extremists holding a third of Iraq and Syria already are rivals.