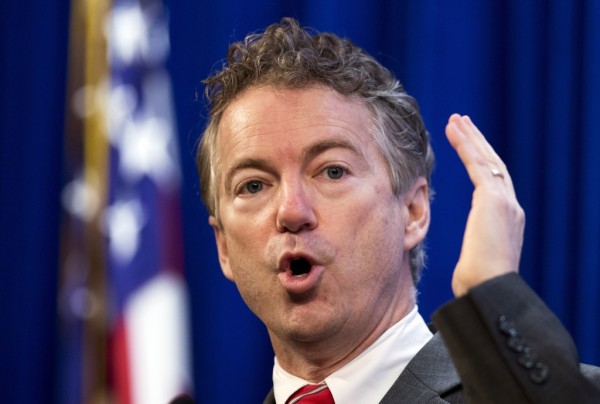 Sen. Rand Paul (R-Ky.) called for a boycott of Saudi Arabia on Saturday, saying Americans should shun the kingdom as it did the apartheid regime in South Africa.

Paul’s comments came as he intensified his attack against Hillary Rodham Clinton, again calling on her to return gifts given to her family foundation by foreign countries, including Saudi Arabia. Paul singled out the kingdom for its treatment of women, citing the case of a woman who was gang-raped and later lashed for being in a car with a man who was not her husband.

Paul said Saudi Arabia should be shunned as South Africa was during apartheid.

“Remember when South Africa was misbehaving? We organized a boycott of South Africa. We should be boycotting Saudi Arabia and not taking money from Saudi Arabia’s government,” Paul said.

At that time international sanctions were levied against the nation, along with a divestment campaign.

While the senator in his statements did not differentiate a government boycott from one by individuals, a spokesperson later said in a statement that Paul was “not calling for a governmental boycott, but rather options for private citizens and investors.”

Paul escalated the attacks against Clinton that he started Friday, saying that there is a “war on women” in Saudi Arabia, but that despite that, Clinton, who has made women’s rights a centerpiece of her political life, accepted the money.

“I don’t think you can be a champion of women’s rights when you take money from a regime that punishes women who are raped,” Paul said.

He also called for Clinton to return money the foundation received from the government of Brunei.

Holly Shulman, a spokeswoman for the Democratic National Committee, said in a statement, “If Rand Paul suddenly cares about women’s rights, then he needs to support equal pay, support the Violence Against Women Act, and support access to women’s health services.”

But Paul, who is considering a 2016 presidential run, sees the Clinton foundation donations as a a vulnerability for the presumptive 2016 Democratic front-runner.

Speaking at a coffee shop here, he asked the crowd if anyone thought it was a “good idea” for Clinton to be taking money from Saudi Arabia.

“Does anyone think she should send it back to Saudi Arabia?” Paul asked.

The United States has extremely close ties with oil-rich Saudi Arabia, including military bases in the country. In January, President Obama visited the kingdom to pay his respects to the royal family after the death of King Abdullah. Obama met with King Salman, who succeeded Abdullah. The men met for a little more than an hour and discussed terrorism, supporting partners in the region and Iran.

The Saudis are a crucial part of the international coalition battling the terrorist group that calls itself the Islamic State, and they have sent warplanes to attack the group in Iraq and Syria.

Paul was asked what he believes constitutes the greatest threat to the United States. (He has consistently been getting questions about foreign policy and asking why he signed a letter a group of lawmakers sent to the Iranian government over negotiations on its nuclear program.)

He responded “most people” would say the Islamic State constitutes the biggest threat, but while the group is a danger to the U.S. Consulate in Irbil and Embassy in Baghdad, “I’m not so sure if you thought through it, though, they would actually be the biggest threat.”

Paul cited potential threats from countries that have nuclear weapons, including Iran and North Korea, and the “dozens, if not hundreds” of terrorist threats that still lurk around the globe. Threats, he said, that must be addressed one at a time.

Saudi lobbyist
But Paul has a factor on his side that could complicate that line of attack against Saudi Arabia , because former Senator Norm Coleman, who lobbies for the Saudis, sits on his Senate re-election leadership team.

In an interview, Coleman said he advises Paul from time to time on Middle East issues. Paul “comes to me for advice, for counsel,” Coleman said. “I appreciate a lot of the positions that he stands for,” he said, citing Paul’s outreach to young people and the African-American community, as well as on privacy issues.
Coleman did not say he’s supporting Paul’s presidential run, however.

“I don’t talk to him that often but on Middle East issues he may call or Doug [Stafford, Paul’s key political advisor] may call,” Coleman said. “I’m sure I’m not the only one he reaches out to.”