Armenian soldiers killed in clashes with Azeri troops near Karabakh 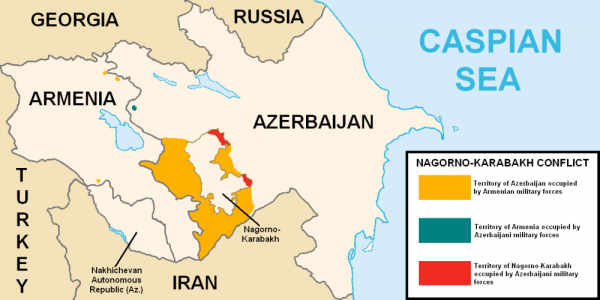 At least three Armenian soldiers were killed and four wounded in clashes with troops from Azerbaijan on Thursday near the breakaway Nagorno-Karabakh region, but the two sides gave conflicting death tolls and disputed who was to blame.

Nagorno-Karabakh lies inside Azerbaijan but is controlled by its majority ethnic Armenians and is a regular point of friction between the two neighbors, who fought a war over it in the early 1990s.

Renewed violence this year along the border area has underlined the risk of a wider conflict breaking out in the South Caucasus, which is crossed by oil and gas pipelines.

The separatist region’s defense ministry said in a statement that three Armenian soldiers had died after Azeri commandos attacked their position. “The Armenian side forced the enemy to escape after a two hour clash,” the statement said.

Azerbaijan’s Defense Ministry accused separatists of triggering the confrontation and said 20 Armenian soldiers had been killed or wounded.

Fighting over Nagorno-Karabakh erupted in 1991 as the Soviet Union broke up, with some 30,000 people dying in the war before a ceasefire was called in 1994. Attempts at securing a lasting peace settlement have failed, despite mediation led by France, Russia and the United States.

Nagorno-Karabakh has run its own affairs with heavy military and financial backing from Armenia since 1994. Armenian-backed forces also hold seven Azeri districts surrounding the region.

Oil-producing Azerbaijan, host to global majors including BP, Chevron and ExxonMobil, frequently threatens to take the mountain region back by force, and is spending heavily on its armed forces.

Armenia, an ally of Russia, says it would not stand by if Nagorno-Karabakh were attacked.