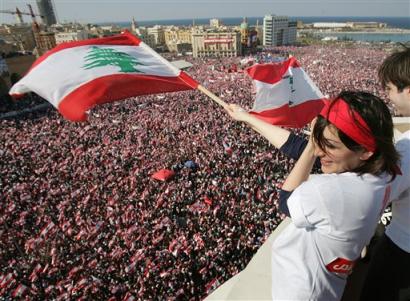 On March 14, 2005, a month after former PM Rafik Hariri’s assassination , over a million Lebanese flocked to downtown Beirut to demand the withdrawal of Syrian troops from Lebanon after a nearly 29-year of military presence. The mass rally was later dubbed the Cedar Revolution or Independence Uprising.
Share: 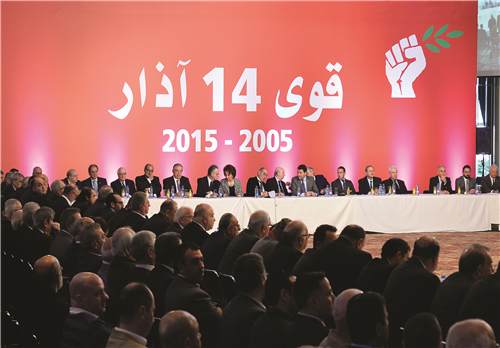 In a  closed-door conference  following the rally  marking the tenth anniversary of the  Cedar Revolution ,  the March 14 alliance  announced the formation of a National Council comprising political parties, independents and civil society activists.

“We have decided to form a National Council comprising political parties, independents and civil society activists. A preparatory committee will be charged with devising a March 14  action plan o for the coming period and to draft the by-laws,” the coalition said in a statement  that was read by former PM  and Future Movement parliamentary bloc leader MP Fouad Siniora after the rally at the BIEL  conference center in Beirut.

March 14 General Secretariat Coordinator Fares Soaid said “anyone who took part in this conference will be automatically considered a member of the general assembly” of the National Council.

“We meet here today 10 years after your uprising in the face of the tyranny that assassinated the best of our symbols,” the conferees said in a closing statement, addressing the Lebanese people.

“We tell the Arab and international public opinion that we were resilient and we preserved a civil, modern and cross-confessional movement,” they added.

“We will not give up our constitution and state, which alone must monopolize the use of force and arms in line with the applicable laws. We won’t allow anyone to defeat us and we don’t want to defeat anyone,” the coalition declared.

“We want the return of everyone to the state, not under preconditions, but according to the Constitution, and this should start through the election of a president,” the statement  added and warned that “the Persian scheme is seeking to drag the region into a war and ignite a Sunni-Shiite conflict, as if the people of the region are fuel for its interests.”

“Everyone is aware of the role of Iran and its proxies, topped by Hezbollah, which is implicating Lebanon and seeking to prolong the presidential vacuum,” the statement added.

Commenting on the Syrian crisis  the statement said:

“The regime’s crimes triggered a huge wave of sectarian and ethnic tensions and paved the way for extremism claiming to defend Islam.”

“Terrorism is threatening the entire world and at the core of this terrorism is the Syrian regime, which is committing crimes against humanity,” the statement  added.

The alliance called for Christian Muslim partnership in running the state

“Today we launch a new dynamism that is aimed at containing the repercussions of violence. We call for the partnership of Muslims and Christians in running the affairs of a civil state, which is unique in this Islamic world,” they said.

“We call on the Lebanese who drew lessons from the war to communicate and show solidarity to curb the violence that is being practiced by those who have not ‘left their caves’ — those who are playing the game of extremism and elimination,” the statement added.

It also urged the Lebanese to “revive the coexistence example in a region that it being invaded by violence.”

The alliance  was established in March 2005 following  the assassination of former  Lebanese Prime Minister Rafik Hariri, which was largely blamed on the Syrian regime at the time.

On March 14, 2005, a month after Hariri’s assassination , over a million  Lebanese flocked to downtown Beirut to demand the withdrawal of Syrian troops from Lebanon after a nearly 29-year of military  presence. The mass rally was later dubbed the Cedar Revolution or Independence Uprising.

The Syrian  army withdrew  in April of that year.

In 2007, the Special Tribunal for Lebanon, a U.N.-backed court, was established to  try Hariri’s killers.

The STL is now trying five Hezbollah suspects  in absentia for  their  involvement in the murder.

Hezbollah chief Hassan Nasrallah has refused to  hand over the suspects to the  Lebanese authorities  or to cooperate with the court .