Dubai’s ruler : No official decision to target the Lebanese in deportation from UAE 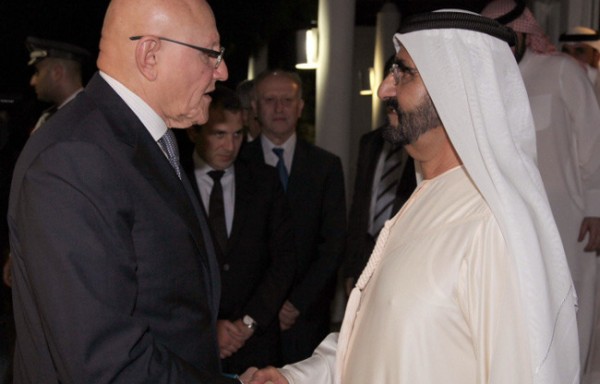 The Gulf state recently gave a 24-hour notice to some Lebanese , mostly Shiites to leave in the latest wave of deportations from the state.

LBC TV was the first to report that the United Arab Emirates decided to deported 70 Lebanese, mostly from the Shiite Muslim community, and gave them 24-hours to leave the country.

But the representative of the Lebanese deportees in United Arab Emirates Hassan Layyan pointed in an interview with LBCI 70 Lebanese families have been deported or at least 200 family members in total .

LBC did not report the reasons behind their deportation.

Other news websites reported that 90 Lebanese were deported .

Foreign Minister Gebran Bassil on Friday confirmed reports that the UAE has decided to deport 70 Lebanese individuals, 63 of which are Shiites.

“We have been informed by the Lebanese Embassy in Dubai that [UAE] authorities decided to deport 70 Lebanese in the next 24 hours,” Bassil wrote in a Tweet.

Bassil, who was informed of the decision by the Lebanese consulate in Dubai, conveyed the message to Prime Minister Salam and the Cabinet during Thursday’s session, according to a statement released by the foreign ministry.

The UAE hosts more than 100,000 Lebanese expatriates according to reports .

This is not the first time the UAE targets the Lebanese Shiites in deportation . In 2010 125 Lebanese were deported on suspicion of links with Hezbollah and the only official answer the Lebanese Foreign ministry was able to get from the UAE was ” for security reasons”.

According to observers this action is part of a growing campaign being conducted by the UAE and other Gulf states against Lebanese nationals, especially Shiites, out of the fear that they may have ties to Hezbollah or the Iranian Revolutionary Guards.

Information obtained by al-Mustaqbal newspaper on Saturday said that the UAE move comes in light of a speech by Hezbollah chief Hassan Nasrallah which contained a strong attack against countries in the Gulf Cooperation Council.

On January 9, Nasrallah alleged the presence of a “Zionist-like naturalization scheme” in Bahrain.

His statement was met by broad Arab dismay, with the Gulf Cooperation Council announcing the remarks contained “an incitement to violence and discord.”

The UAE’s foreign ministry also summoned the Lebanese ambassador, handing him a protest letter over what it described as “hostile statements.”

Observers in the UAE told the daily that “some of the deported Lebanese are known for bragging and clearly declaring loyalty for Hezbollah and its political axis in the region.

“They keep on stating their provocative stances in public areas, work places and through Gulf social networks,” they told the daily.

Diplomatic sources denied that the case is sectarian, revealing that several Christian families are included in the deportation decision.

The sources estimated that the matter is linked to the “UAE’s national security,” pointing out that authorities informed the Lebanese state that the decision will not be reconsidered.

The daily said that UAE authorities began informing Lebanese expats, mostly residing in the Ajman emirate , of its decision on Wednesday.

“Some were granted 24 hours to leave, others until Sunday,” the report continued.

Sources told al-Joumhouria newspaper that those who were deported had received previous warnings, pointing out that UAE authorities don’t have to inform them of the reasons behind the decision.

UAE was criticized by Sunni Islamists for not including Hezbollah in a list of 83 “terrorist” organizations it published in November.

Shiite-Sunni tensions have been on the rise in the Middle East with increasing sectarian violence in Syria, Iraq and Yemen. Gulf states are extremely concerned about the rise of Shiite Iran’s influence throughout the Arab world, observers report.