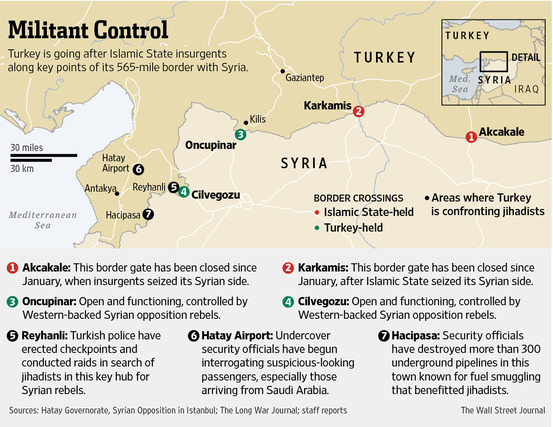 Turkey has closed two border crossings with Syria as a security precaution as fighting around the northern Syrian city of Aleppo intensifies, Turkish officials said on Wednesday.

The crossings at Oncupinar and Cilvegozu in Turkey’s Hatay province had been shut to vehicles and individuals crossing from Syria since March 9, officials at both posts told Reuters. Syrians with passports are allowed to cross back into Syria.

Turkey has kept its borders open to refugees since the start of Syria’s civil war four years ago. But it has come under criticism for doing too little to keep foreign fighters crossing and joining militant groups, including Islamic State.

Aleppo, around 50 km (30 miles) south of the border, is divided between government forces and insurgent groups fighting to topple President Bashar al-Assad in a conflict estimated to have killed 200,000 people.

Dozens of people were killed last Wednesday when insurgents attacked a Syrian government security building in the city, bombing it and then launching a ground assault.

Jihadist groups including the al Qaeda-linked Nusra Front and the Muhajireen and Ansar army claimed responsibility.

The closure of the Turkish border posts also comes after an air strike on Sunday in northwestern Syria, close to the border, hit a camp used by the Nusra Front, the second big attack on the group there in recent days.