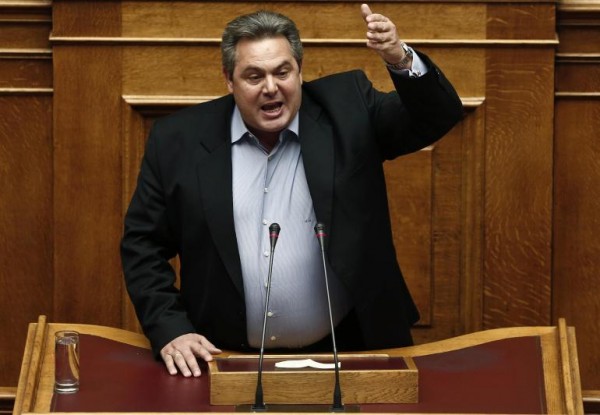 Greece will flood Europe with a “wave of millions of economic migrants” including militants linked to the Islamic State group if the eurozone did not back down on austerity demands, Greek Defense Minister Panos Kammenos reportedly said on Monday. His comments came even as the Greek government and its “troika” of creditors — the European Commission, European Central Bank and International Monetary Fund — agreed to hold a further round of talks over a 240 billion-euro ($260 billion) bailout program.

“If they deal a blow to Greece, then they should know the migrants will get papers to go to Berlin,” Kammenos, who founded the right-wing anti-austerity party Independent Greeks, reportedly said. “If Europe leaves us in the crisis, we will flood it with migrants, and it will be even worse for Berlin if in that wave of millions of economic migrants there will be some jihadists of the Islamic State too.”

Kammenos added that the European Union’s rules allowing passport-free travel in the Schengen Area, which consists of a bloc of 26 nations, left these countries vulnerable to the influx of migrants.

“If they strike us, we will strike them. We will give to migrants from everywhere the documents they need to travel in the Schengen area, so that the human wave could go straight to Berlin,” he said, according to media reports.

Last week, Nikos Kotzias, Greece’s foreign minister, also said during a meeting of his EU colleagues that if Greece was forced out of the eurozone “there will be tens of millions of immigrants and thousands of jihadists,” adding that the EU was trying to “crush the Syriza government in its early days.”

In February, Greece, which is reportedly seeking the disbursement of an outstanding aid of nearly 7 billion euros ($7.5 billion), had secured a four-month bailout extension, providing it time until the end of June. However, European officials have indicated that no money will be released before a full assessment of the Greek economy.

Negotiations between the Greek government, led by the left-wing Syriza party, and its European creditors have turned sour in recent days with creditors accusing the country of falling short of its earlier promises.