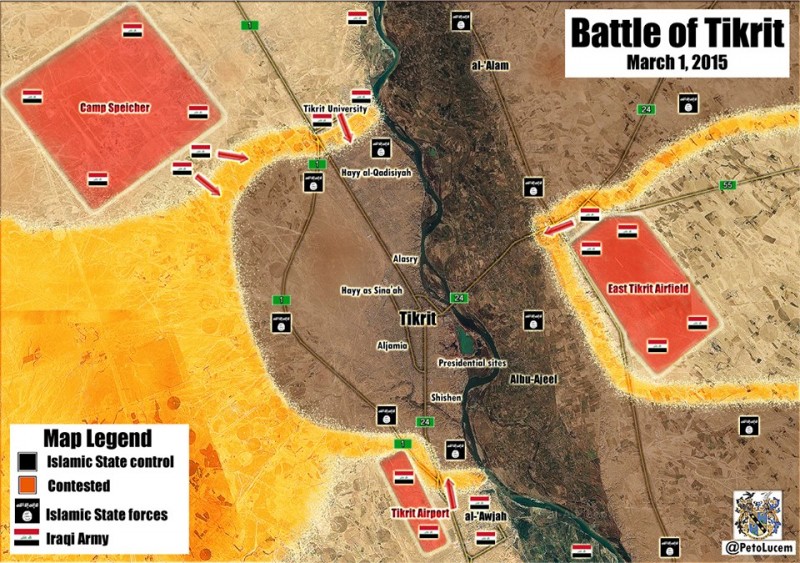 Iraqi security forces and Shiite militia fighting the Islamic State took control of the center of a town on the southern outskirts of Saddam Hussein’s home city Tikrit on Sunday, security officials said.

Sending in more troops and fighting fierce clashes, the army and militiamen were still struggling to drive out Islamic State militants entrenched in buildings in the western section of the town of al-Dour, officials said.

Military commanders said the army and militia, known as Hashid Shaabi (Popular Mobilisation) units, launched another offensive late on Saturday to break into the center of al-Dour.

By Sunday they had succeeded in recapturing the central area where government headquarters are located, but Islamic State insurgents were still holding positions in the west.

“Daesh snipers are still targeting our troops from some of the high buildings. We should be able to take them out with helicopter attacks this evening,” said Ahmed al-Yasiri, a Hashid Shaabi leader fighting in al-Dour. Daesh is the Arabic acronym for Islamic State.

Officials said security forces and Shiite militia fighters had also captured about third of the village of Albu Ajil south of Tikrit – hometown of the executed Sunni president.

Some Albu Ajil residents were accused by authorities and Shiite militia groups of taking part in the killing of soldiers from the nearby Speicher army camp when Islamic State fighters overran Tikrit and northern Iraq last June.

Shiite militia fighters have described the advance on Albu Ajil as revenge for the Speicher killings, although militia leaders say all civilians in the Sunni Muslim region will be well treated.

The campaign to retake Tikrit is the biggest offensive so far against Islamic State insurgents. If successful, it would be the first time the army and militia have recaptured a major city from the militants.

Progress in the offensive, which was launched a week ago, could also affect the timing and strategy for a wider offensive later this year to retake Mosul, the largest city under Islamic State control.

A U.S.-led coalition has supported Baghdad’s fightback against Islamic State with air strikes, military training and equipment. But the main support on the ground for the Tikrit operation has come from Iranian commanders and Iran-backed militias.

Elsewhere in Iraq, a bomb exploded near a busy street in Baghdad, killing at least four people in the predominantly Shiite Talbiya neighborhood in the east of the capital, police and medical sources said.

In the mainly Shiite district of Hussainiya in the northern outskirts of Baghdad, a bomb went off near a restaurant, killing three people.

Another bomb hit a busy street and killed two passers-by in Madaen, a town 30 km (20 miles) southeast of Baghdad.