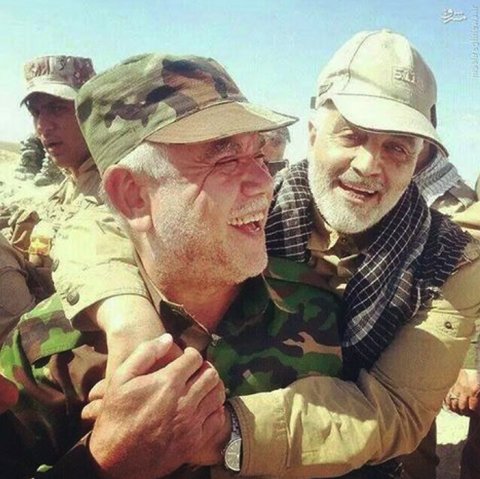 Qassem Suleimani (R) celebrating with Hadi al-Amiri, chief of Iraqi Shiite militias , during the liberation of Jawlala in Iraq from the Islamic State. “Suleimani , the head of the Qods Force, the foreign arm of Iran’s Revolutionary Guards Corps is the leader of the Shiite militias in Lebanon, Syria, Iraq and Yemen,” a top military analyst was quoted as saying
Share:

Iraqi government forces and Iran-backed militiamen entered a town on the southern outskirts of Saddam Hussein’s home city Tikrit on Friday, pressing on with the biggest offensive yet against Islamic State militants that seized the north last year.

Military commanders said the army and mostly Shi’ite militia forces had retaken the town of al-Dour on Tikrit’s outskirts, known outside Iraq as the area where executed former dictator Saddam was found hiding in a pit near a farm house in 2003.

It was not immediately clear if the town had entirely fallen. Some officials said the troops were still only in the south and east of the town, which had been rigged with bombs by retreating Islamic State fighters.

But Hadi al-Amiri, leader of the largest Shi’ite militia group taking part in the operation, said al-Dour had been “totally liberated” and that the advance on another key town north of Tikrit, al-Alam, would take place on Saturday.

The army, joined by thousands of Shi’ite militiamen backed and advised by Iran, is five days into an advance on Saddam’s home city of Tikrit, by far the biggest target yet in a campaign to roll back last year’s advance by Islamic State fighters.

The assault by the Shi’ite-led army and its militia allies on Tikrit in Iraq’s Sunni heartland has symbolic importance for both sides. Officials said on Friday they had captured a farm to the east of Tikrit that belonged to Saddam’s deputy Ezzat Ibrahim al-Douri, now a prominent ally of the jihadist fighters.

Douri, King of Clubs in the U.S. army’s deck of cards depicting Saddam-era officials wanted after the 2003 U.S.-led invasion, is the only member of Saddam’s inner circle still at large. Recordings purportedly of him pledging allegiance to Islamic State last year were one of the factors that helped the militants portray themselves as liberators of Sunni territory.

Tikrit is the first major city that Iraq’s forces have attempted to recapture from Islamic State in northern Iraq, and the government hopes the campaign will reverse the momentum that saw the fighters sweep across the north last year.

Iran has taken a leading role in the campaign, with the commander of its Revolutionary Guards’ elite Quds Force Qassem Soleimani spotted on the battlefield this week helping to supervise the offensive. The United States, by contrast, says it has played no role in the Tikrit offensive despite an air campaign against Islamic State fighters in both Iraq and Syria.

Progress has been gradual. A column of soldiers and militia on the eastern flank have cleared territory of bombs and snipers while other forces approach along the Tigris river from the north and south.

On Friday some elements of the army and militia were pausing to redeploy and consolidate, officials said.

“There are areas that we have liberated so we must place forces in these areas to prevent Islamic State insurgents from returning,” said a source at the Samarra operations command to the south of Tikrit. “It is a reorganization not a standstill.”

Some Tikrit residents have fled their city, saying they fear the militia more than Islamic State. Those fears have been fueled by calls for revenge among some Shi’ites for the June killing of up to 1,700 Iraqi soldiers captured by Islamic State at the Speicher military base just outside Tikrit.

The outcome of the Tikrit offensive will have a significant bearing on the shape and timing of an even more pivotal move further north against Mosul, the largest city under Islamic State control.

Rapid military success would give the Shi’ite-led government in Baghdad momentum as well as foothold in the north, while stalemate in Tikrit would stall any future plans. How the army and militia treat the Sunnis of Tikrit may determine how they are received by the Sunnis of Mosul.

Iraq’s senior Shi’ite cleric Ayatollah Ali al-Sistani spoke out against any attempts at vengeance against civilians.

“Do not succumb to emotional outburst when you lose a loved or cherished one, especially when it comes to families that the enemy used as shields and who did not fight you,” Sistani said in a Friday sermon delivered by an aide in the city of Kerbala.

“Be protectors for the weak and aid them in getting to a safe haven.”

An official from the Hashid Shaabi, or Popular Mobilisation units as the mainly Shi’ite militias are known, said they had provided food and water and safe passage to civilians in territory taken this week.

“Most of them were sheep and cow herders, nomads. When areas are liberated, any family that is in the line of fire – the armed forces cease fire immediately,” the official told Reuters.

To the south of Tikrit, Islamic State militants attacked soldiers and militia fighters east of the city of Samarra with an explosives-laden tanker, killing four people and wounding 28, a source at Samarra hospital said.