Syria: Rebels with a lost cause 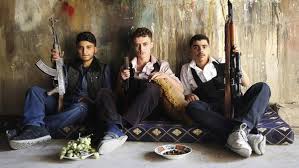 Free Syrian Army fighters hold their weapons as they pose for a picture in Jobar, Damascus
Share:

Tha’er gave up on the Syrian uprising the day he was ordered to turn his guns on men he had fought alongside for two years.

Until last year, his commanders told him jihadi groups such as Islamic State of Iraq and the Levant (Isis) would help topple President Bashar al-Assad. But when they declared Isis a new enemy, he stopped trying to understand the logic of war. Tha’er, who withheld his name to protect his family, left the fight and joined his wife and son at a Turkish refugee camp.

If the world is at a loss over how to grapple with Syria’s mayhem, so are those mired in a conflict that has killed more than 200,000 people and displaced half the population since 2011. To many in the opposition, the revolt they started has become unrecognisable. Rebels are now fighting each other for control of resources or territory almost as much as they are fighting the Assad forces. Jihadis still allied to rebels, such as Jabhat al-Nusra, al-Qaeda’s Syria franchise, attack groups backed by the US.

Syria’s war also became an arena for Shia Iran and Sunni Gulf Arab states to vie for regional dominance. The rivalry has deepened a sectarian divide between rebels dominated by Syria’s Sunni Muslim majority and a government led by Mr Assad’s minority Alawite sect, an offshoot of Shia Islam. US-led coalition air strikes against Isis have further internationalised the crisis.

Fuel for the fire

But many rebels are now struggling to navigate a civil war advancing every agenda except the one they took up arms for — an end to four decades of Assad family rule.

“What was once called a revolution is no longer revolution,” says Abu Hozeifa, a commander of a US-backed rebel force, Jaish al-Mujahideen. “Now there is this international struggle, and we’re allowed to be fuel for the fire, nothing more.”

It is a critical period both for opposition leaders trying to prove their relevance and for the international coalition battling Isis. As coalition-backed Iraqi forces next door fight to oust Isis from northern cities, the US, Turkey and Gulf states are due to start training Syrian fighters to take on the group this month.

But those efforts can only succeed if they have rebel support.

“Without a good plan we will keep losing men,” says Ahmed Abu Emad, a spokesman of the Hazm movement, a US-backed rebel force. “We have a new generation emerging. We need them to believe in the values of our uprising, to remind them why we started this and show them there are still good people.”

Even those eager to fight are struggling to stay engaged.

Sleem, from Isis-controlled eastern Syria, is raising a local force to combat the group. A weary man, with a long white beard and rough hands, he checks carefully for Isis spies before agreeing to be interviewed in the Turkish border city of Şanliurfa.

A diehard regime opponent (he was tortured aged 13 for burning the ruling Ba’ath party slogan) Sleem was one of the first commanders to fight Isis. The group captured and sentenced him to death. The night before his execution, he escaped through a hole he and other inmates dug in their cell. After hiding in fields for a week, he smuggled himself into Turkey underneath a truck. “Two of us crammed into a box the size of a coffin,” he says.

Sleem expected support when he arrived in Turkey late last year. Instead, he found opposition leaders in disarray, unable to agree on how to organise for training. “I have good honest fighters who fled both Isis and the regime who are now sleeping in the streets,” he says. “We have nobody to help us. Nobody cares.”

While tens of thousands of rebels are still in Syria — nearly all of them Sunni — they are on their own in a two-front fight against both Isis and Assad’s government, which has tens of thousands of soldiers and support from foreign and local militias. Analysts estimate Isis has some 60,000 fighters across Syria and Iraq. The coalition plans to train about 5,000 fighters each year to take on Isis, but it looks like a drop in the ocean.

Under so much pressure, rebel groups and alliances constantly fall apart. Hazm’s force of about 5,000 dissolved itself this week, facing increasing attacks from Nusra fighters and no allies to defend it.

Mr Assad’s forces are doing their best to take advantage of the chaos, pushing hard to surround and besiege Aleppo, the rebels’ last stronghold in a major city. So far, the rebels have kept the regime at bay, but the fate of Aleppo is a constant worry for the opposition.

When the revolt started, rebels like Abu Faisal say they had a clear sense of purpose. He traces his desire to oust the Assad government to his childhood in the 1980s, when a state crackdown against an Islamist revolt brought Syrian soldiers storming into his house, breaking furniture and pilfering his mother’s jewellery. He was seven.

Abu Faisal, a pseudonym, says he had known what to expect when the street protests first erupted four years ago: police raids, insurgency, military sieges. He had stocked up on rifles by the time the armed revolt broke out. What he never expected was to end up where he is now: disillusioned, broke, running a computer repair shop across the border in Turkey. Abu Faisal still wants to fight. But past experience can no longer guide him among commanders he worries are not as committed to ousting Mr Assad as they are to enriching themselves.

Tha’er bounced between three rebel groups in northern Syria before quitting. He says his last commander drove a luxury car and owned a villa in Turkey, but would not give him a $20-a-month salary to help his family escape a refugee camp.

In Turkey he harvested lemons for $8 a day. The farm owners, Alawites, taunted Syrian field workers, he said, suspecting many were once in the opposition. “We followed our heart for four years, just to find each time we were wrong,” says Tha’er. “I don’t want to join another group just to be disappointed like I was with others.”

Syria has broadly splintered into four parts over the past two years. The Assad regime holds the western spine running south from the Mediterranean coast to Damascus. Sunni militants hold the northwest and southern border regions. Isis holds another third, mostly desert, from the eastern frontier with Iraq to the northern border with Turkey. The Kurds, one of Syria’s most oppressed minorities, have carved out a semi- autonomous region in the northeast.

It is hard for Tha’er to accept the chaos was born of the 2011 protests inspired by the Arab spring that toppled dictators from Tunisia to Egypt and Libya. “In the beginning I would stand on the sides of the protests and watch the security forces come drag people away,” he says. “I wasn’t timid. I was terrified.”

But as the protests grew in his northern home town, Jisr al-Shughour, he did join. Security forces abandoned the town when protests grew violent, leaving locals in charge for nearly a month.

“It was a month of pure freedom, we took shifts guarding homes and stores, we discussed ideas, even with people we disagreed with . . . it was an amazing time,” Tha’er says.

In Aleppo, Abu Faisal joined a secret armed cell in late 2011, while peaceful protesters were still on the streets — a fact he is proud of, but which many activists argue stoked violence.

His group assassinated officers and Assad loyalists, often Shia or Alawites, who shot protesters in Aleppo. “The first time we went after someone . . . I felt terrible. It was fear — not of being arrested, but of the deed itself. But after you do it, you feel better. Maybe dealing this blow will help the killing stop.”

It didn’t. The government brought in tanks and artillery, and a full scale armed revolt erupted as Sunni resentment — fuelled by memories of the 1980s rebellion that was crushed by the Assad regime — was rekindled. Foreign Sunni fighters who saw Syria as the next front for global jihad trickled, then poured in.

Abu Faisal recalls an Iraqi known as Abu al-Abed who fought the US in Afghanistan and Iraq and taught Syrian rebels insurgency tactics in late 2012. “When I first met him, he was already over 50 but he looked great, not a single white hair on his head,” he says. “The Syrian revolution turned him grey.”

Iraqi and Lebanese Shia militias joined Mr Assad. The influx of foreigners brought out sectarian undercurrents the original protesters hoped to keep suppressed. Foreign governments such as Qatar and Saudi Arabia began to bankroll rebels, particularly Islamists, to try to influence the direction of the revolt. In 2013, Abu Faisal met a Qatari official at a restaurant in one of the Turkish border cities where more and more self-proclaimed rebel “battalions” and “brigades” were being launched.

This is the moment in his memory that marks the revolt’s downfall.

The official pulled out a briefcase stuffed with €500 notes, Abu Faisal recalls. “He said, ‘This is for you. I hope if you work with other groups you will mention who helped.’” He handed the briefcase back. But others took the money. YouTube videos of well-armed formations thanking foreign backers replaced those of ragtag fighters celebrating the capture of border posts and government buildings.

A few months ago, Abu Faisal tried to rejoin the fight. He went to train a newly formed battalion in Aleppo, but quickly gave up when he saw even small unit leaders squabbling over command.

The group’s leader, an old friend, followed Abu Faisal to Turkey to ask what went wrong. Abu Faisal asked him to remember the protests at Aleppo university, when tens of thousands risked their lives for what seemed a noble cause. “We had a higher goal. Now, I don’t know what the goals are.”

Abu Faisal says he approached every influential commander he knew, begging them to unite. Rebel leaders have made numerous attempts to end the divisions; each has failed.

Many respected leaders who might have had a chance at unifying fighters are dead. In late 2013, a rocket killed Tha’er’s favourite commander, Sheikh Sharif. Other commanders started fighting over who should replace him. Tha’er left in disgust and never found another battalion he trusted.

The disarray makes it harder for US-backed groups to organise supporters, leaving the way open to groups such as Isis and Nusra to appear more coherent and appealing in comparison.

“Isis and Nusra have more pros than cons. The cons are pretty bad . . . like killing people who don’t deserve to die,” says Tha’er. “But Isis established a state in a year. Look at the region they control. They can take on the whole world.”

The chaos leaves Syrian rebels navigating the vacuum among themselves. For Tha’er, that has meant accepting more modest aims. He went back to Syria and joined a new rebel formation this month. He does not get a salary, he says, but the group tends its own fields to supply itself and make extra money.

For now, they have no ambitions to topple Mr Assad or control vast swaths of land. The goal is only to recapture Jisr al-Shughour. He still has not forgiven himself, he says, for not making it back before his mother died. “You could say I no longer believe in a Syrian revolution. Actually, I think things could even get worse,” he says. “For me, this is about one thing now: going home.”