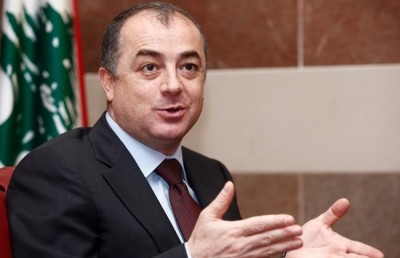 The Free Patriotic Movement (FPM) which is closely allied with the Iranian backed Hezbollah militant group slammed former president Michel Suleiman and described his election in 2008 as “the biggest stab to the constitution.”

“The remarks that were voiced in a friendly Arab country by a Lebanese official who belongs to the past were unfortunate, especially that statesmen must be keen on the internal unity of the Lebanese during their foreign trips.”

He was referring to statements made 3 days ago by Suleiman during a visit to the UAE, in which he was quoted as saying that a weak president is one who is “seeking to ensure the continuity in power of his children or sons-in-law.”A possible reference to Aoun whose aides are close relatives.

“This is the weak president who must not reach” the Baabda Palace, Suleiman stressed
Bou Saab was quoted as saying in a tweet : “He who is strongly calling today for respecting the Constitution has forgotten that his election to his post was the biggest stab to the constitution since independence.”

He was referring to Suleiman’s election in May 2008 following a national dialogue conference in the Qatari capital Doha.

Article 49 of the Constitution stipulates that “it is not possible to elect judges, Grade One civil servants, or their equivalents in all public institutions to the Presidency during their term of office.”

Suleiman ,66 was serving as army commander when he was elected president by the parliament.

On 7 May 2008, an ongoing political crisis between government loyalists and the opposition quickly spiraled out of control when Hezbollah announced that the government’s decisions to declare the group’s private telecommunications network as illegal and to relieve the head of security at Beirut International Airport (an alleged Hezbollah sympathizer) of his duties amounted to a “declaration of war”. Fighting immediately broke out throughout the country, with members of Hezbollah and its allies in the Amal Movement and the Syrian Social Nationalist Party quickly bearing down on their enemies in the Future Movement and the Progressive Socialist Party.

Hezbollah occupied the western part of Beirut and tried but failed to occupy Mt Lebanon .

The fighting lasted until 14 May 2008, when the Lebanese government canceled its two decisions after the proposition of Suleiman to do so. As the crisis ended, Suleiman was the subject of criticism by some commentators and politicians since the Army did not directly intervene in the armed clashes that took place but instead tried to separate between fighters and protected political figures. On the other hand, others defended his stance by arguing that the only way to preserve the Army’s unity and prevent another civil war was to ensure that it remained uninvolved in the fighting against the Lebanese citizens.

The Lebanese parliament failed last week and for the 18th time in a row to elect a president to replace Suleiman whose term ended on May 25 last year.

As in the past sessions the parliament was unable to reach a quorum because Hezbollah its ally MP Michel Aoun’s Change and Reform bloc MPs boycotted the sessions.