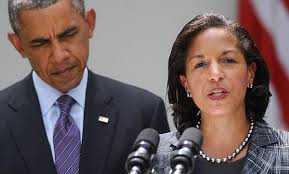 The strain between the U.S. and Israel deepened Wednesday, as top advisers to President Barack Obama sharply rebuked Prime Minister Benjamin Netanyahu’s upcoming speech to Congress as “destructive” and challenged his judgment on the Iran nuclear negotiations.

Netanyahu countered by accusing the U.S. and its negotiating partners of having “given up” on stopping Iran from developing a nuclear weapon.

“They might accept this, but I am not willing to accept this,” Netanyahu said Wednesday night at a meeting of his Likud Party outside Jerusalem.

Tensions between the U.S. and Israel have been on the rise since Netanyahu accepted an invitation from Republican leaders to address Congress on March 3. The speech was arranged without White House or State Department involvement, and the Obama administration blasted that as a breach of diplomatic protocol.

Her comments were followed by sharp words Wednesday from Secretary of State John Kerry, who said during congressional testimony that when it comes to the nuclear negotiations, Netanyahu “may have a judgment that just may not be correct here.””It’s destructive to the fabric of the relationship,” Rice told the Charlie Rose show. “It’s always been bipartisan. We need to keep it that way.”

Rice’s and Kerry’s statements were among the Obama administration’s toughest public criticism of Netanyahu’s speech and the negative impact his opposition to the Iran negotiations could have on the close alliance between the U.S. and Israel.

The invitation and Netanyahu’s plans to speak have aggravated many Democrats on Capitol Hill, more than a half-dozen of whom have said they would skip the session.

Ahead of his arrival in Washington, Netanyahu turned down an invitation to meet privately with Senate Democrats, saying such a meeting could “compound the misperception of partisanship” surrounding his visit.

“I regret that the invitation to address the special joint session of Congress has been perceived by some to be political or partisan,” Netanyahu wrote in a letter to Sens. Dick Durbin, D-Ill., and Dianne Feinstein, D-Calif. “I can assure you that my sole intention in accepting it was to voice Israel’s grave concerns about a potential nuclear agreement with Iran that could threaten the survival of my country.”

Feinstein was expected to attend the speech. More than a half-dozen Democratic lawmakers have said they would skip the address, with Virginia Sen. Tim Kaine and Illinois Rep. Jan Schakowsky becoming the latest on Wednesday.

Schakowsky said she was concerned that the speech could end up scuttling delicate negotiations with Iran.

“The prime minister wants the negotiations to end, and his purpose in speaking to the Congress is to convince us that the president is about to agree to a deal that threatens Israel’s existence,” Schakowsky, who is Jewish, said in a statement. “If the talks are to fail, let Iran be the party that walks away from the table rather than the United States.”

U.S. officials believe Netanyahu’s trip is aimed primarily at derailing a nuclear deal with Iran, Obama’s signature foreign policy objective. While Netanyahu has long been skeptical of the negotiations, his opposition has increased over what he sees as Obama’s willingness to make concessions that would leave Iran on the brink of being able to build a nuclear weapon.

U.S. and Iranian officials reported progress in negotiations this week on a deal that would clamp down on Tehran’s nuclear activities for at least 10 years but then slowly ease restrictions. Israeli officials warned this week that such a deal would allow Iran to become a nuclear threshold state.

The U.S. and its negotiating partners — Britain, France, Germany, Russia and China — reached an interim agreement with Iran in late 2013 that froze key parts of the Islamic republic’s nuclear program in exchange for some relief from Western sanctions. U.S. officials argue that even the interim agreement has slowed Iran’s pursuit of a nuclear weapon.

“Israel is safer today with the added time we have given and the stoppage of the advances in the Iranian nuclear program than they were before we got that agreement, which by the way the prime minister opposed,” Secretary of State John Kerry said Wednesday, referring to Netanyahu. “He was wrong.”

The White House has been weighing ways to counter Netanyahu’s address to Congress, as well as separate speech to the annual policy conference of the American Israel Public Affairs Committee. The administration is still weighing whom to send to the conference, with some officials pushing for a lower level representative than normal.

There are no plans for Obama to meet with Netanyahu next week, with the White House officially citing its practice of not engaging with world leaders in close proximity to elections.

Vice President Joe Biden and Secretary of State John Kerry will be traveling abroad on trips that were only announced after Netanyahu accepted lawmakers’ invitation to speak to Congress.